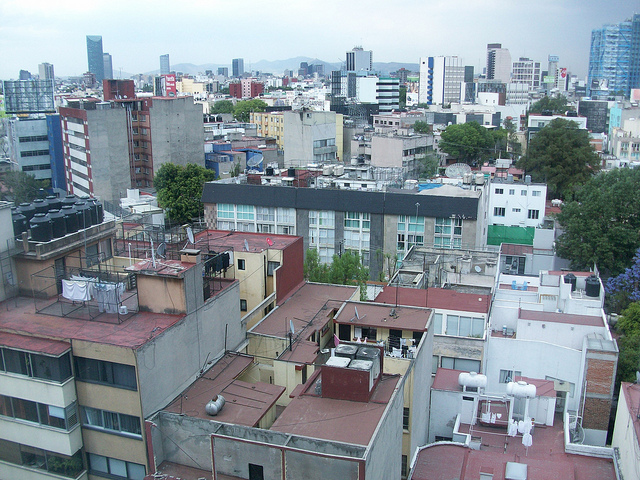 What you probably hear about Mexico in the news is all true and full of lies. The naked and robed, Aztec gold and stinking trash lie side by side. The city drainage system pumps out sewage into the streets and cafés release the sweet smell or café de olla. The threat of violence and the bright smiles of some wonderful people coexist side by side. The beautiful and the obese. Families of ten living in swamps live only five minutes walking from the richest man in the world. Thousands worship an image of death, a mixture of Catholicism and pre-Hispanic beliefs… Mexico City is where organised chaos rules the day.

I find my self in a soiled paradise where green lakes and valleys once bathed in cool sunshine criss-crossed with opaque turquoise canals has become a waking nightmare. Now skyscrapers and slums fill the flood plain sinking deep into the damp soil, the great Spanish cathedral of the Zocalo on the verge of collapse, its foundations sunk into the holy temple of the Aztecs where the infamous human sacrifices once took place. The Cathedral stands tall as a monument to “civilisation” which brought rats and disease along with a fear of a new God intent on domination and corruption.

In three words Mexico is: colour, brutality and music. It’s everything. The beautiful art work of Saturnino Herrån and rich history and pride in the UNAM. Its beauty is found in its chaos. Each morning I take an elbow in the stomach while trying to get onto a packed bus and each morning my mouth salivates profusely at the thought of the delicious and strange huitlacoche, a pre-Hispanic delicacy still eaten throughout the Republic. The chaos brings darkness into day and turns fear into excitement…

The city buzzes night and day with police engines and menacing looking men in black who are friendly when you ask them for directions. Dogs guard the roof tops and cats pass their evenings fighting in the streets along side drunks who sing songs of beautiful ladies, themselves left behind and down on their luck but contented, for the moment at least in their stupor.

Popo and Iztacci loom large over the grand city with snow white circles wrapping around their sleeping heads. Invisible in clouds of poison air for most of the year, on clear days after the rain they rise high over the horizon, only to disappear into the mist again by morning, perhaps puffing deep black plumes of smoke into the sky and perhaps not. It’s hard to know if these great volcanoes were just dreams.

And in my dreams, they are filled with dark images of the drunk hiding in the alleyway as I walk home and the music of daytime. Of mariachis in the old square and old couples dancing Danzon under the palm trees; the performance poets and mimes as well as the talented accordion player who I share a word with each morning on my way to work. Sometimes I meet the hummingbird which visits the bird feed house outside of my classroom.

I wrote this six months ago and it originally appeared in 3:AM Magazine. For me in sums up life in Mexico City.

Heaving sun slip away unnoticed, the

Crowded streets a swash with the crock

From her tongue: She sleeps.

But restless, the bustle does not cease

Back to their nests,

To a dreamland, of filth contaminated air

Dancing pretty pictures in the sky

Your colours purple – your body

Fat to bursting with the business of the day.