How to deal with the zombie invasion 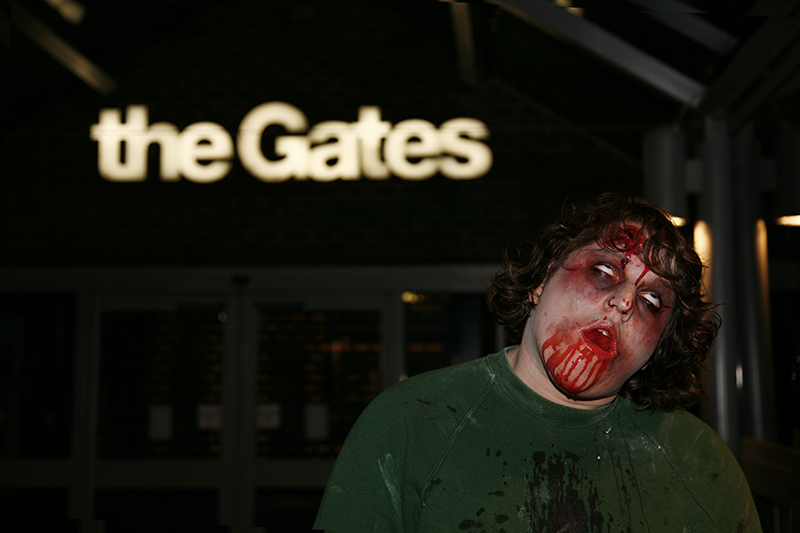 You are warned to stay away from any of the undead.

If you dare to venture into Durham town centre this coming Halloween night, then you’d better go out prepared… You may witness organised hordes of what you assume to be young people in zombie fancy dress staggering about, with dark circles apparently painted under their eyes and obscene noises dripping from their lips. You may see a bedraggled young woman screaming that she wants to suck you dry. You may be enticed by this tempting offer. This might sound like a standard night out, but reader, beware of this fatal twist… The “fake” blood on their shirts is not fake, and the precious liquid that the ravenous young woman is lusting for is your blood. Yes, reader, you have been warned, the worst of our fears have come to be and Durham is in the grip of a zombie invasion!

Now how does one identify these fearsome beasts, I hear you ask. How is it possible to distinguish between a bloodthirsty meat muncher and a Durham student who has perhaps been pennied one too many times at a formal? It is, I sympathise, a very difficult task. Both look rather worse for wear, and both may indeed have an odour to match. But whereas one may be after your flesh for a night of carnal delight, the other may be lusting for your flesh so badly that they bypass the usual foreplay entirely and just go straight in for a delightful bite. Obviously, you don’t want to end up in the wrong situation…

It would be so wonderful if zombie identification were a simple task. However, be warned, the distinction between zombie and uninfected Durham student can be a devilishly tricky one to decipher. Both zombies and Durham student non-zombies are liable to try to lure you into joining them in their sinister and dubious smelling lairs, although for very different reasons. With both zombies and non-infected Durham students alike all running amock around classy hotspots such as Klute late at night, with bodily fluids smeared around their mouths, it would be advisable to approach neither, although if the liquid has a particularly reddish hue, then it is especially recommended to stay away.

Keeping a sharp mind and/or a sharp stake with you at all times may be the wisest course of action. (I know, stakes are traditionally for vampires, but when you’re trying to survive a homicidal zombie takeover attempt for world domination, you can’t afford to be too picky.) Hell, if you find yourself being chased by the undead, throw whatever you can at them – rubbish bins, lecture notes, your least favourite corridor mate. When it’s life or death, the little things become unimportant.

Armed with the horrific knowledge of what the future potentially holds for our usually peaceful and quaint little Durham, I hope that, somehow, we can defeat this zombie invasion. The very fact that you are reading this shows that there are still non-zombies out there, that there is still hope, and we must not give up. United, we can fight against them. We just have to remember our principles, and keep them close to our hearts: we do NOT want to eat each other’s brains, we do NOT want to permanently look and smell like we’ve just stumbled out of Klute, and we do NOT want to have to worry about our bits falling off… Enough said.