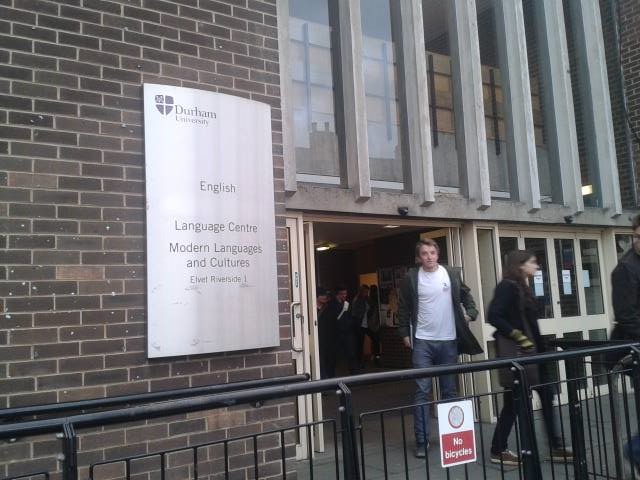 Lectures had to be cancelled after the floods last winter

Durham University released the figure after a freedom of information request by The Bubble.

The lecture theatre, which flooded after the River Wear burst its banks in November last year, was closed for several weeks causing all teaching to be rescheduled.

Students reacted with anger at the cost of the repairs. Matthew Lynch, a fresher at Hatfield, commented:

“While I appreciate the necessity to repair Elvet Riverside, to spend that kind of money on a recurring problem is ridiculous.

“The University should be looking to correct what is a long term problem, rather than just throwing money at it then forgetting about it.”

Ben Allcock, who is in his second year at St Aidan’s, argued that the University should rethink its policy towards the lecture theatre.

“Elvet Riverside is not a nice building, and spending a quarter of a million to repair it is just pouring money away in my opinion.

“Elvet Riverside floods too regularly and the University cannot justify continually spending huge amounts of money on a building that quite frankly needs a complete overhaul.

“They should spend the money on redesigning the building, and modernising it, as it would make it much more attractive for the students and public.”

A University spokesman explained that steps had been taken to reinforce the physical integrity of the building, including installing CCTV into the plant room where the flood water entered and relocating vulnerable equipment to a higher level.

However, data obtained from the Environment Agency indicates that the area remains at “significant risk” of flooding, the highest of the three risk categories.

Trevor Armour, Director of Estates, said: “Elvet Riverside plays an important role in the delivery of lectures and seminars to thousands of students each term. We acted swiftly to ensure that disruption was kept to a minimum and that teaching could resume as quickly as possible.

“The University used approved suppliers to ensure the repair work was carried out to the highest standards and at a competitive price, and it included putting measures in place to minimise the impact caused by any future flooding.”

Students regularly complain that the physical condition of Elvet Riverside is not up to standard, especially when compared to the state of the art facilities in the Palatine Centre.

A Facebook group – ‘Elvet Riverside Disruptions’ – was set up last year to express student frustration at the University’s response to the flooding. The first post explained the reasons why the group had been established:

“We have been moved around the city, expected to make 40 minute journeys in 5 minutes; we have sat in freezing lectures where we can see our own breath; we have had classes halved and disrupted by power cuts. What will be next?

“We are paying thousands of pounds in fees, and yet still we are subject to this substandard.

“Yes, the floods were no one’s fault, but the work being done to sort out this problem has taken too long, and we still have not seen the results.”

Last year’s deluge caused disruption across the city, with some local residents using sandbags to protect their properties.

Heavy rain also caused landslides down the banks of the River Wear, forcing footpaths to be closed off. Durham County Council carried out an investigation into why the banks were so unstable, which included a full geotechnical assessment.

The annual inter-collegiate rowing regatta, the Novice Cup, was cancelled due to poor river conditions.

The Durham Students’ Union was contacted by The Bubble to ask for its opinion on the Elvet Riverside repairs, but it declined to comment.

However, the DSU President, Daniel Slavin, said in an email that the amount of money spent “does not appear out of the scope of such a repair”, and noted that a significant proportion of the money would be recovered by insurance.