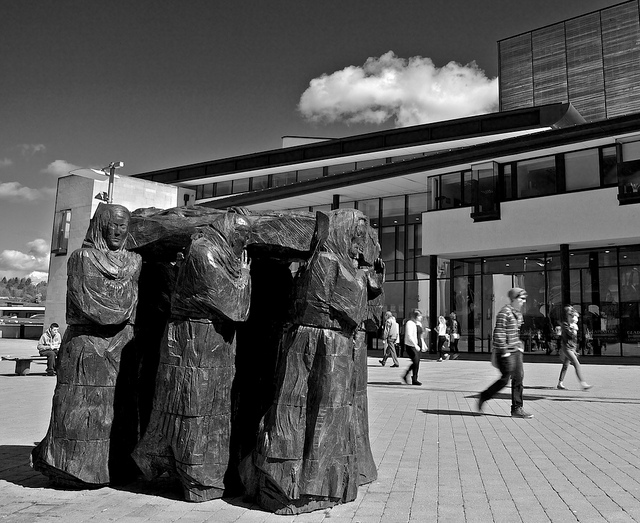 Fenwick Lawon’s The Journey is to be relocated due to drunken behaviour.

A statue is to be relocated from Millennium Place to outside of the Cathedral due to the area having become a hot spot for drunken nights out. It is thought that planning permission will soon be applied for to move Fenwick Lawson’s bronze The Journey, which depicts monks carrying the body of St Cuthbert, to its new location and the Cathedral is said to be sympathetic to the need.

Millennium Place was originally designed as a cultural quarter but soon became merely a route for clubbers to reach the nearby Walkergate complex, with the Tourist Information centre there eventually closing down and tourists left confused by the statue’s location. The artist described the area as having become a ‘no man’s land’ since the statue’s unveiling by Princess Anne in 2008.

This is not the first time that Durham has had problems with its drinking culture, and in 2010 it was revealed by Public Health England to have rates of binge drinking and under-18 hospital admissions far above both the national and regional averages. This is costing the NHS an estimated £43.9 million per year, as well as a further £59.9 million – £99.3 million of costs incurred due to alcohol-related crime. According to University Police Liason Officer Philip Raine there is a marked increase in such incidents when the university year begins in October, particularly during the first term.

The statue was designed to be easy to relocate and it is thought that the funds to do so will come from the original appeal to buy the sculpture.