Durham hit by a zombie invasion 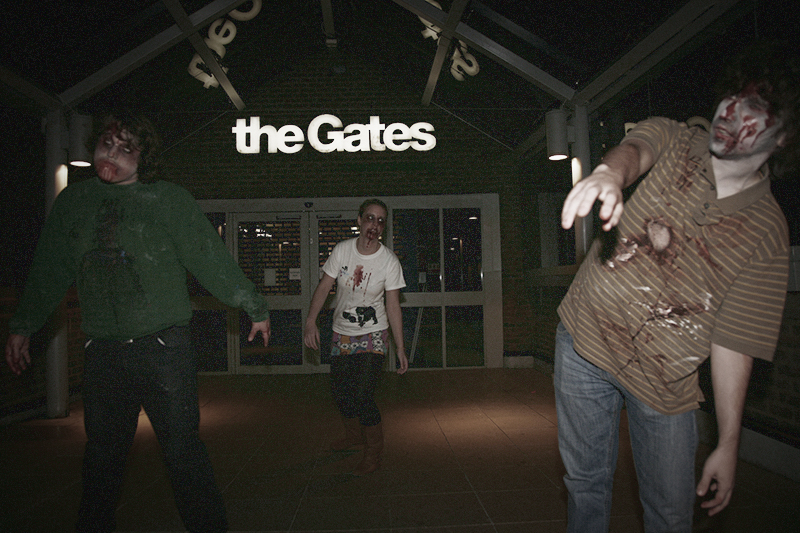 Zombies are roaming the streets of Durham.

Hundreds of undead beings have swarmed the streets of Durham, according to eyewitness accounts. The police have been inundated with reports of so-called ‘zombies’ shuffling in the direction of the city centre and groaning what is thought to be the word ‘brains’. Trails of decomposing limbs have been left scattered in their wake.

Although it remains unclear how dangerous these creatures are, the blood stains and calls for ‘brains’ appear to be strong indicators that they should not be approached. According to Zombology researchers and popular culture, there is a high probability that they feed on human flesh and can infect others with zombism with a single bite. The public are being warned to avoid all suspicious individuals, particularly those with blood-stained clothing, vacant stares and a partiality for humans adorned with gilets and unkempt hair.

Police are under pressure to protect the living population from the throngs of the humanoid creatures converging on North Road and The Gates shopping centre. Several Durham University students have been attacked but no fatal injuries have yet been sustained. Geophysics student Luke Marsden had a narrow escape on his way to the library when a group of zombies invaded the Science Site. ‘It was well scary,’ he said of his experience.

The University has issued a warning advising students to stay indoors and avoid all non-essential travel. Official University policy still states however, that seminars are compulsory under all circumstances.

Theories explaining this phenomenon have sprung up from all faculties of the University. Whereas the Physics department has attributed the zombie outbreak to a bout of radiation reanimating the dead, the English department has suggested it could be down to a bizarre drama exercise that ‘got out of hand’. Conspiracy theories have also begun to spread among student circles. One of the most persistent rumours accuses student visitors from Cambridge of spiking drinks in Klute with zombie venom, with the intention of repressing Durham University’s inexorable rise up the league tables.

One Van Mildert College student, Michael Harrap, has devised a zombie apocalypse survival plan, issuing free ‘Zombie Survival Sheets’ offering advice on zombie identification and maps highlighting zombie-free refugee camps in Durham. ‘Emergency zombie kits’ containing water, food, first aid kit and a safety helmet are also on sale and can be delivered directly to student accommodation across the city. The enterprise has proved hugely popular and is in the process of expanding to Queen’s Campus. Mr Harrap said: ‘Ever since I watched Shaun of the Dead, a zombie apocalypse contingency plan has always been in the back of my mind. It’s great that I finally have the chance to put it into action.’ His idea is in line to win the next Blueprint business plan competition, proving that the recent attacks are not bad news for everyone.

Meanwhile, in the heart of the city centre riots have broken out with students wielding cricket bats and lacrosse sticks in an attempt to launch a counter-attack on the undead. Placards emblazoned with the words ‘even worse than chavs’ have been proudly waved up and down the Bailey.

However, a fledgling zombie rights group has condemned the riots, claiming that ‘zombies are human too’. ‘Zombies 4 Justice’ spokeswoman, Sarah Parkin, said: ‘Zombies aren’t the monsters people make them out to be. They have thoughts and feelings just like us. They should not be cast out by society and hunted like animals.’ A new module on Zombie Studies, entitled ‘Conversations with the Undead’, is being considered for next year with the aim of reducing the prejudices associated with these creatures and enhancing students’ understanding of their undead counterparts.