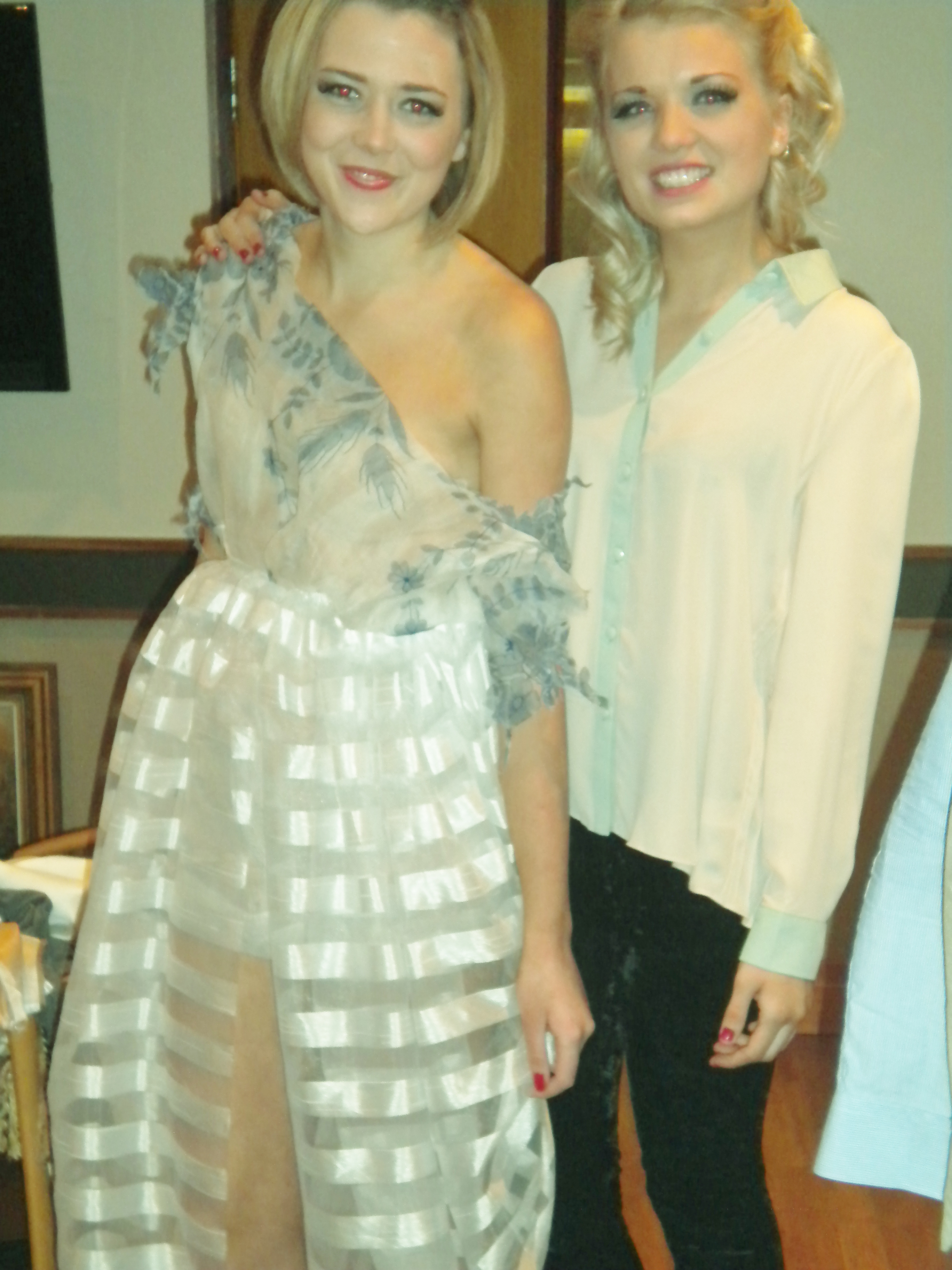 With only an hour left before the doors opened and the glamorously adorned fashion show goers descended into the hall, I stood surveying the frenzy of frantic Collingwood personnel putting the finishing touches to the seating arrangements and table decorations. Staying true to the Burlesque theme, tables were garlanded with red and black balloons, sweets and glitter, conjuring up images of the Moulin Rouge itself. Not to mention the generous helping of wine and the selection of goodie bags on offer provided by the Fragrance Shop. In the few minutes before I was escorted backstage, the dancers had finalised their routine, models had completed that all important last run through and the tech team had checked the lighting and music sequences. Nothing had been left to chance.

Once backstage, the nerves and excitement of models and organisers alike were palpable. Half-dressed models, in an array of exquisite outfits ran between hair and makeup, gossiping about each other’s outfits and banishing any last minute fears of that infamous runway walk. Despite over a month of preparation leading up to this moment, I was told that it had been a long last few days with its fair share of last minute dramas; think missing models, stage malfunctions and designers dropping out. Yet models beings models, they were more than happy to pose for a photo or run me through their favourite piece.

Finally in what seemed like no time at all, it was show time with guests making their way to their tables in a fine selection of bespoke suits and beautifully crafted dresses to rival the creations adorned by the socialites chosen to sit front row at London Fashion Week. As the lighting dimmed and the wine flowed, guests were treated to the charm of the evening’s two presenters, perfectly matching in faded red chinos and loafers. A particular novelty was the opportunity to text or Snapchat the Collingwood Fashion Show Hot Line, which made for some interesting comments.

With the promise of renowned high street stores and one off creations from independent designers, the clothes did not disappoint. Fashion graduate, Munufe Kara show cased her range of fashion credentials, mixing contrasting textures and pastel shades to draw attention to the skilled bouclé detail and create a collection of unique and feminine dresses which were equally accessible yet fashion forward. Keeping with the notion of contrasting textures, pieces from Sorella demonstrated the high impact of pairing a billowing blouse with super stream lined leggings, which varied in texture from jet black leather options to the more daring choices in midnight blue velvet.

Returning once again to the Collingwood catwalk, Olivia Tarpey indulged the audience with a striking selection of handmade corseted dresses which would have been just as apt on the runway of London Fashion Week. Just think cascading chiffon and tulle in perfectly washed out shades. Guys were also treated to the casual and easy going style of Fair Isle jumpers in a selection of darker shades from menswear designer Holy Ghost, which also encompassed Durham’s growing liking for snap-backs. But perhaps the guys’ highlight of the evening was the much anticipated female underwear walk which showcased pieces from Boux Avenue. Think delicately embroidered baby doll lingerie tops in an array of black lace and animal print chiffon, teamed with suspenders to complete the look. It will come as no surprise to note the rather large cheer which ensued once the first model stepped foot on the runway.

Whilst models changed into their outfits for the second half of the show, guests enjoyed musical renditions from the house band, who treated the audience to a mix of R Kelly, the Police and the Strokes whilst the audience made their way to the bar. Arguably, perfectly timed to ensure the maximum amount of money was raised (a fair amount of alcohol had been consumed by this point), the raffle and auction ensued. Guests enjoyed the possibility of winning a beginners course in Burlesque dancing or bidding for the chance to win two VIP tickets to the Renault World Series in Barcelona, providing the lucky bidder with access to the pits, the drivers and the VIP area. However, it was the two press tickets to watch a Newcastle United game from the press box, dine with the journalists and commentators at the press lunch and gain access to the press conference after the game, which raised the most money, selling at £320.

After the frivolity of the auction and raffle had subsided it was back to business. The second half started as it intended to carry on, with topless male models taking to the runway in a selection of Northern Monkey casual tracksuit bottoms. Not wanting to be shown up by the guys, the girls slinked down the catwalk modelling glamorous party dresses, perfect for those rare nights out in Newcastle. Demonstrating that it is not just the prestigious London art schools that can produce talented designers, chic dresses from Georgie Moule (Moule Clothing), a John’s student, and crisp suits by Chet Alexander, a student at Van Mildert, were particular highlights of the evening, mixing perfectly with the more established high street brands. Definitely ones to watch in the future. A mix of more casual evening wear from New Look, ideal for Loveshack Wednesday’s, rounded off the evening and appeared most practical for dancing around to One Direction during the finale. It would seem guests had a particular soft spot for said boy band too!

Just like London Fashion Week, once all the ‘thank yous’ had been said and flowers given to the organisers, guests made their way to the after party at Market Vaults, where the glitz and glamour carried on into the fashionable hours of the early morning.