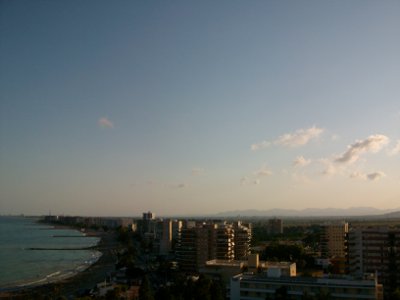 The ideal location for an aspiring au pair….

As another lengthy student summer vacation approached I had a travel bug to satisfy. As ever I had typically few funds to quell it, so I decided on a Spanish au-pairing summer stint. No worrying about board and food, airport pick-up included, language practice, an opportunity to learn about Spanish culture first-hand, even €60 per week “pocket money”, all in exchange for a few hours childcare per day; an excellent deal I thought! When my friend enthused about how she couldn’t wait to return to her “French family” this summer, I decided to formulate my own profile page on www.aupair-world.net back in January.

After a slight adjustment of the truth by switching my “smoker” status to “non-smoker”, two offers arrived in my mailbox the next morning. Naturally I thought I would easily settle into the Mediterranean sea-front apartment near Valencia, complete with communal swimming pool and only one seven year old to teach two hours of English to per day. I smugly looked forward to a hot, relaxing, summer on the beach which was virtually free of charge (minus the £100 flight costs).

Upon arrival at the end of July, I began to adjust to sleeping for over twelve hours a day. My body struggled to work out why I was starving it until 3pm and eating vast amounts of paella or arroz cubano, and then fasting again until 10.30pm when it was this time plied with brie and bacon sandwiches. It seemed that I was living a sort of surreal second childhood: no rent, no bills, real non-student food, endless Bob Esponja (Spongebob Squarepants), building sandcastles and swimming in the sea. My only concerns were the evenness of my tan and Spanish verbs, although I did finally learn the difference between ser and estar.

Just as I couldn’t believe my luck, four days into my stay the inevitable major stumbling block presented itself. The boy’s father announced that he needed to talk about his son, since he was “disappointed with his progress”, and he began to carry out ritual evening English assessments. The fantastic two hour deal promised in my contract inexplicably increased to consume the entire day, with the boy’s mother glowering if I asked to go for a walk (largely to hide and smoke my one cigarette a day). The boy obviously resented endless hours of English homework whilst his friends were outside playing. Gone was the excited child running around laughing whilst dressed up as a skeleton; a “mini-sofa-emperor” was born.

He barked orders, refused to eat unless he was spoon-fed and shouted if you dared to walk in front of the television. I simply became part of his kingdom. When his mother made the daily announcement that English homework was about to commence, a declaration that we both dreaded, the tantrums began. Normally when I recognised the symptoms of a tantrum, I desperately tried to distract him or I just rode them out. Ultimately when I had tried everything, I would simply follow him when he escaped to hide in his room. Even I felt sorry for him having to endure my pursuits.

It was only a matter of time before he discovered his greatest trump card; simply refusing to speak to me. My efforts became ever more varied and desperate: playing, drawing, board-games, singing, going for walks, swimming, fishing, crab-catching, Bob Esponja… but still he kept schtum. I had met my match in a seven year old. In return the family stopped speaking to me and even denied me internet access! The longest conversation we had in those last two weeks confusingly consisted of their sincerest hopes that I had felt like one of the family, but that I should leave early since they were utterly and thoroughly disappointed in me. I consoled myself with weekend partying sessions in the local town, and the fiestas, crab-catching, long beach walks and spending time with other friends in the communidad served to elevate my mood.

It was with a sense of relief I made my escape to visit my cousin. The seven year old boy was thrilled to see the back of me, and let’s just say I don’t think I’ll trouble myself to keep in touch. On the plus side, my Spanish has infinitely approved compared to my knowledge of the language on arrival. By living with a Spanish family, who were kind and friendly at times, I also learnt much more about Spanish culture and Spain today than I would have otherwise. The family and their communidad showed me just how bad the recession currently is in Spain.

We are virtually oblivious of this here in the UK, with only some brief press coverage following the February protests and the general strike on the 29th of September. Few realize that the Spanish unemployment rate currently stands at over 20%. Skeletons of a once thriving economy trace the carreteras and suburbs in the form of derelict half-finished apartment blocks, their trellised concrete support structures open to the elements. The collapse of the construction boom three years ago has left no-one with the funds to complete or remove these ominous shells.

The housing market is truly stagnant; my au-pairing family had simply given up trying to sell their apartment after not receiving a single offer in three years. The local tiling factory, the largest employer of the town, was making 25–50 redundancies a week at random due to falling demand, creating unbearable stress for the families I came to call my friends. Even the English expat community my cousin lived in near Alicante didn’t escape. The recently opened Iceland supermarket is now the dominant employer for the British families there, many of whom were once highly sought-after business men and skilled tradesmen.

I feel great appreciation towards my au-pairing family for showing me the Spanish language, culture and the challenges that Spain faces today. I would not have experienced this in the same way by simply travelling around. Nonetheless, for me au-pairing is something I intend only to have done once. The challenges of living with a completely unfamiliar family are extensive, particularly if English lessons are involved as is often the case for British au-pairs. I did come back with a surprisingly healthy bank balance, having not paid for any living costs during the summer and my €60 per week covering buses, alcohol, and a day-trip to Valencia (although this was largely spent nursing a hang-over in the main plaza). However, the idea of becoming “one of the family” as the au-pairing industry emphasizes may not quite mean what you anticipate, you could become one of the minions subject to a particularly tedious breed of mini-sofa-emperor.