Beneath the Union Jack 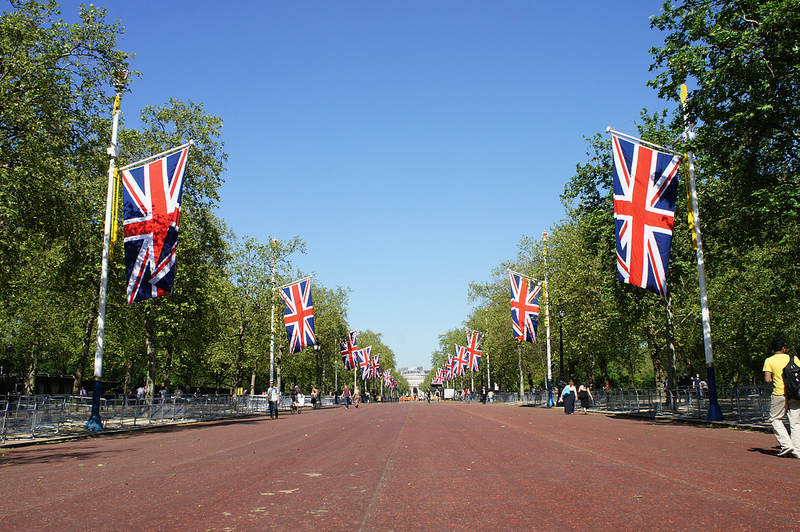 Union Jacks line The Mall for the Diamond Jubilee celebrations

Just over two weeks ago marked sixty years that Queen Elizabeth II has reigned over the UK and Commonwealth. National celebrations of the Queen’s Diamond Jubilee took place over three days. It was a weekend marked not just by public holidays, but by thousands of street parties arranged by local people. In total, ten thousand street parties are said to have taken place. I myself was invited to one in North London. Although we turned up late, the atmosphere was welcoming: family, friends and strangers all brought together. The residents’ organisation had set up tables and benches running all along the street. Everyone had congregated in smaller groups and were huddled under umbrellas. After we’d arrived and sat down I plucked up the courage to talk to an elderly gentleman and soon the whole group was chatting to ‘Jim’. I remember feeling proud at the end of our interaction that we had reached out to a member of the older generation and shared our company with him. ‘If this is what it means to be British,’ I thought, ‘then I’m all for it.’

A few days previously, I’d asked a friend what she was doing for the Jubilee. ‘There’s no Black in “Union Jack”,’ she’d replied. Initially, I was somewhat taken aback. Had I pressed her further, perhaps my friend would have said that she’s never liked the Queen, but it got me thinking about the relationship we non-white Brits have with the monarchy. The Queen’s predecessors were also the founders of the British Empire and the same individuals who invaded and enslaved countless peoples from India, Africa and the Caribbean. My friend being from Antigua, her ancestors would have been slaves in this very Empire. Perhaps she does have a point after all?

Many praise Elizabeth II for having reigned with such steadfastness for so many years. She is also known for the annual awarding of honours – CBEs (Commander of the British Empire), OBEs (Officer) and MBEs (Member). However, not all those who have been offered OBEs by the Commonwealth have been willing to accept one. Back in 2003, the British Jamaican poet, Benjamin Zephaniah, publicly rejected his OBE, stating that ‘the very name of the Order of the British Empire reminds [me] of “thousands of years of brutality…of how my foremothers were raped and my forefathers brutalised”’. Helen Mirren and Ken Loach amongst others have also rejected their OBEs, but they have done so privately. Unfortunately, a private rejection of an OBE does nothing to challenge the title in its current form. As Zephaniah highlights, the name itself refers to an Empire that abused his foremothers and fathers. It isn’t that the British Empire didn’t accomplish greatness for England – it did create extensive wealth and power – but at an enormous cost. This was the lives of millions of slaves and indentured labourers.

Unfortunately, it seems that we as a nation are still unable to accept and acknowledge this. Earlier this year a handful of the Queen’s advisers suggested that the word ‘Empire’ be dropped from the honours titles because they feel it is associated with class and therefore remains inappropriate. In the same article, author David French stated that the government is failing to ‘recognise the way in which the Empire is perceived by people…in former colonies’. However, the Queen’s advisers and French appear to be missing the point. The word ‘Empire’ refers to centuries of systematic slavery and exploitation in the name of England. Their inability to recognise this indicates their failure to grasp the gravity of using such a word in this context.

It is possible that most of us Brits do not want to face the facts about our history either. Journalist George Monbiot challenges our historical perceptions in a recent article for The Guardian. Monbiot states that we have a ‘remarkable national ability to airbrush and disregard our past’. He explains that rather than simply denying what happened in the name of Britain, we go one step further and choose to ignore it. Monbiot believes that this is because ‘the myths of empire are so well-established that we appear to blot out countervailing stories even as they are told’.

Over the years, these honours have been handed out to British citizens of different creeds and races. Despite its name, the OBE has come to represent something positive for British people and culture. However, one is forced to ask the question: is the British Empire something that should still be revered in this day and age? As stated by Monibot and Zephaniah – it supported itself through the physical and psychological torture of entire peoples. The landscape of former colonies has also been left with huge political and economic scars.

Britain is wealthy because it exploited the resources of the countries it once governed and yet I feel lucky to have been born here. However, my being British does not mean I have to accept the brutalities implemented against my Indian ancestors. Asking the descendants of the people you enslaved to become part of the empire that enforced this brutality is nothing short of an insult. By ignoring these titles as they exist, we are colluding with the Queen in a glorification and promotion of the abuse of power that the British Empire was founded upon.

It is time for a change – a renaming of these honours to something that doesn’t glorify slavery and barbarism. Progress can only be achieved once we destroy the belief that it is an honour to be part of an Empire based on suffering. Then we can celebrate the fact that despite its historical actions, Britain remains a safe birthplace and haven for many.