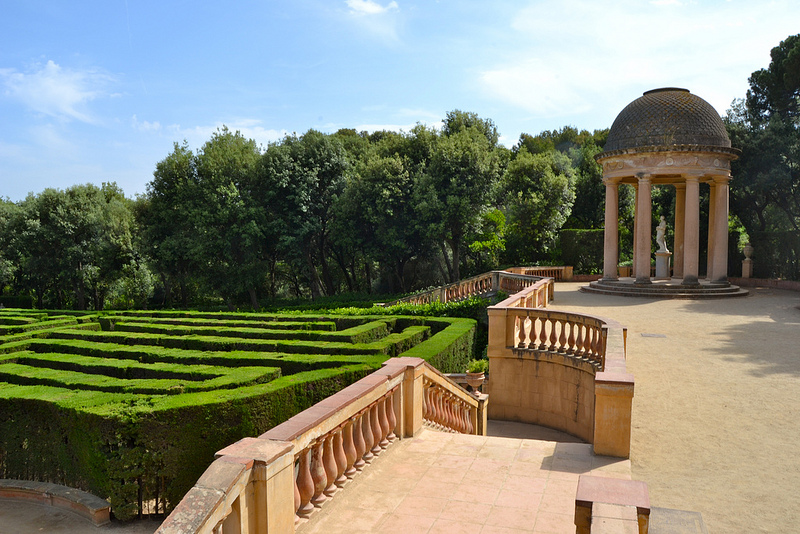 Every tourist who visits Barcelona leaves convinced that the entire city was designed by Gaudí. They will have visited the Parc Güell, ascended the towers of the Sagrada Familia and admired the terrace of the Pedrera, all carried out in a blur of a whistle-stop, modernist tour. Yet Barcelona also has another side, hidden from double-decker bus routes and only accessible to those who really want to get underneath the city’s skin. Yet to avoid our readers having to learn Catalan for a weekend break, below we let you in on the secret and collate for you the top five sights and activities that are far from the average tourist radar…

Whilst on a city break taking some time out to relax is not often at the top of people’s list of priorities, with preference going to a mad dash around the area in an attempt to see and do all that Barcelona has to offer in the space of a long weekend. Having lived there for three months (all of that time attempting to do just that) and still not having finished, I can confirm that your goal is unachievable. So sometimes it’s a better idea to just take a step back and some time out so that you can return reinvigorated and ready to hit the tourist trail with a new-found energy. The Parc de Labirint d’Horta is the spot to do just that. Lying on the outskirts of the city, you could almost forget that you’re within a sprawling urban area as for once the view is blocked by rows of trees and hedges. Try your luck in the small maze or simply wander around the network of tiny paths, themselves forming their own puzzle as they weave around gardens and fountains to eventually intersect. Finish off by planting yourself on a bench, watching the turtles and feeling the immense sense of satisfaction that only comes from not being in the Sagrada Familia queue.

If you’re visiting Barcelona during July or August then it seems almost criminal to miss out on the vast array of free open air arts events that are on offer throughout the city. However, despite taking place in central locations covering the entire metropolitan area (and the Spaniards’ tendency to flee their homes during the hottest summer months) the majority of the attendees always appear to be local residents. The only inquisitive tourists there will be the lucky few who happened to be in the right place at the right time. The fact that all of the promotional material seems to be produced solely in Catalan may not help matters, but nowadays Google translate leaves no one with a valid excuse. For those interested in live music, the concert series ‘Música als Parcs’ is the place to be as several times a week for two months you can catch jazz, classical or big band performances taking place outdoors across the whole range of the city’s urban parks. Or if cinema is more your thing, look out for information from local town halls about free showings of everything from surprisingly recent blockbusters to smaller art house productions, often screened in their original language with Spanish subtitles. You can even catch one of a month-long programme of films on San Sebastian beach if you fancy staying put after a day in the sun! But perhaps the most impressive that you’ll find is the unforgettable ‘Sala de Montjüic’ – just because where else in the world will you watch a film projected onto the wall of a castle, with the lights of Barcelona spread at your feet?

When deciding on a holiday day out abandoned civil war bunkers didn’t use to be the first destinations that sprung to people’s minds, but after a trip to the Turó de la Rovira that situation always drastically changes. Going by several different names (also including ‘Bunker del Carmel’) is just one of the reasons why it’s so difficult to get directions this hidden gem, not helped by the fact that it can only be reached by on foot as opposed to the metro on which most new-comers to the city tend to rely. This seems to keep it out of the guidebooks and online ‘must see’ lists, effectively meaning that one of the city’s best views (and for Barcelona, that’s saying something) is hidden away, to be discovered only by tourists willing to walk the path less trodden. After following a run-down street up a set of concrete steps you will arrive at one of the most dystopian scenes that you’re likely to be greeted with outside of a film set, with crumbling walls and remnants of patterned tiles from long-destroyed homes. Then in front of you, in every direction, you will see Barcelona – close enough that you can glimpse every building, but far enough away to appreciate its scale. The perfect spot for a picnic, and also great when the sky clouds over as that’s when you really start to feel like you’re in a horror movie. Remember your camera!

Passing groups of local youths loitering in the alleyway as you make your way towards the tiny club at the end, it may not seem like the best night out that you’ll get this holiday. Then when you see the Jazz Sí club itself, sporting hand-written scrawl announcing tonight’s act and a window covered in faded photos and news clippings, you will probably decide that your worst fears have been confirmed. What you probably won’t realise is that you’ve just stumbled across one of Barcelona’s best live music venues, featuring a plethora of different theme nights during the week at which you will be treated to either performances by visiting artists or students from its music school. You have to be prepared to stand, potentially with bare feet from those keen enough to get a spot on the mezzanine dangling just above your head, but it’s worth it for the buzzing local atmosphere. You’ll be surrounded by only the most adventurous of tourists, with the majority of the crowd made up of hardened regulars who know to arrive hours in advance to grab a seat, but once the show begins you won’t even notice who’s there. Think singing, dancing and that traditional Spanish passion of the most intense kind. And with a free drink included in the entrance price, what’s to lose from adding a sprinkling of jazz to your trip?

Yet, despite all of these ideas for ‘off-the-beaten-track’ things to do and places to go, there is one key thing missing. This key thing has thus made the top spot on the list, because without it it is impossible to reach the heart of this amazing city that you are visiting. Traditions are what Barcelona revolves around and its festivals are the air it breathes, with a different celebration taking place so often that it is almost impossible not to plan your trip around one. Where else in the world can you form a part of the scrum holding up an eight-storey-high human tower, join hands with a stranger to dance in front of the cathedral or hide in doorways to avoid fire-breathing dragons? So whether it be San Joan, la Mercè, San Jordi or the Festa de Gràcia, brush up on your Catalan, find yourself a programme and attend it all. You will not be disappointed.