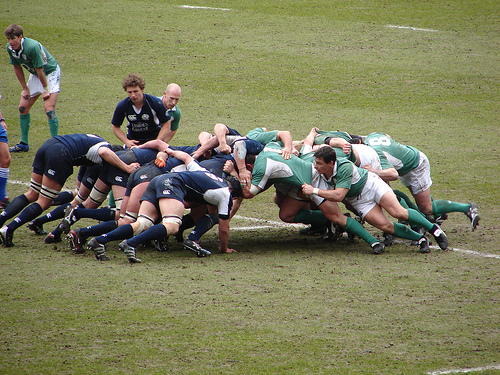 Scotland have looked increasingly good recently, unlike Ireland, but do either have a chance of winning the championship?

Round one of the Six Nations provided supporters with spectacles of pace, power and consummate ability. These were interspersed with moments of high drama that captured the essence of what is the ultimate team sport. Yet for all the glorious tries and shuddering hits, are we any closer to picking a winner from Europe’s finest?

Italy displayed their usual brand of physicality against Ireland, yet they seem to be offering something more during this campaign. With the inspirational Sergio Parisse acting as a link between forwards and backs, they have displayed a direction at 10 and accuracy in the three-quarters not seen since the glory days of Truncon and Dominguez. The Italians gave Ireland a huge scare and a win against either Scotland or Wales seems to be within their growing capabilities.

That being said, the Scots put three tries on France in round one, showing they can do more than simply rely on carries by their back row and the kicking of Dan Parks. Their optimism should be cautious however, as an injury to Max Evans would severely limit their attacking options. They can beat Wales in Murrayfield and would be devastated to lose to Italy, though a win against the Irish may be a step too far.

Wales’ recent results of 7 defeats in 8 look ugly, though we should remember that six of those losses have come against the “Big Three” of the southern hemisphere. They have a world class scrum when everybody is fit, but the loss of Adam Jones and Gethin Jenkins through injury robs them of their primary strength. There is individual talent in the backs, but a lack of cohesion means a mid table finish looks a probability.

The French seem to have shaken off their autumn hangover and at times looked devastating in attack against Scotland. They have a strong scrum and a potency out wide to trouble the tightest of defences. The Stade de France may be a fortress, but this team are a different animal when playing away from home. Tough assignments at Twickenham and the Aviva Stadium should end hopes of back to back Grand Slams.

England look in reasonable shape having avoided a potential banana skin in Cardiff. They have a kind draw and can now look forward to three consecutive home matches. They should have too much for Italy and Scotland and who can forget their demolition job on France the last time Les Bleus turned up at HQ. What price a Grand Slam showdown with Ireland in Dublin à la 2003?

Ireland seem something of an enigma at present, but the game against Italy should never have been so tight. A lack of accuracy out wide, coupled with dire refereeing of the scrum dragged what is a talented side down to Italy’s level. They should still be regarded as contenders and if they beat France in Dublin this weekend, they will have the momentum to repeat the glories of 2009.

The draw favours England and Ireland this year, so these two will be tipped to fight it out for the title. This year looks unlikely to produce a Grand Slam Champion given how well matched many of the sides are. If it comes down to a straight shoot out between England and Ireland, then the Emerald Isle might just emerge victorious.