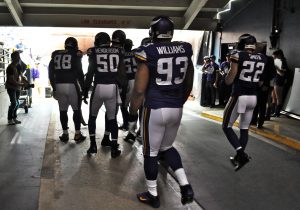 Week seven of the National Football League (NFL) saw eight home wins, and six away wins as division standings across the board grew ever tighter.

There was even a tie between the Seattle Seahawks and the Arizona Cardinals, as a horror show from both teams’ kickers in over-time – including an inexplicable miss from just 27 yards for the Seahawks’ Stephen Hauschka with only seven seconds left on the clock – led to one of the lowest scoring games in NFL history. This leaves Seattle narrowly ahead of second-placed Arizona Cardinals in the National Football Conference (NFC) West, with a record of four wins, one loss and one tie (4-1-1).

Both of the other teams in this division failed to capitalise on the unexpected tie, with the Los Angeles Rams slipping to a 17-10 defeat at home to the New YorkGiants despite the best efforts of quarterback Case Keenum, who threw 291 yards. The San Francisco 49ers were beaten 34-17 by the Tampa Bay Buccaneers, leaving the 49ers with a miserable record of one win and six losses (1-0-6).

The Giants remain at the bottom of the NFC East, even though the Washington Redskins lost on the road to the Detroit Lions 20-17, and the Dallas Cowboys did not play as it was their bye week.

As mentioned above, the high-flying Minnesota Vikings lost on the road to Philadelphia 21-10, with the Eagles moving up to second in the NFC East behind the Cowboys. The Green Bay Packers took advantage of this first Vikings reversal by comfortably beating division rivals the Chicago Bears 26-10 under the lights on Thursday night, and subsequently moved up to second in the NFC North with four wins and two losses.

The New England Patriots continued their fine form under returning star quarterback Tom Brady, as he completed 19 passes for 222 yards to take the Patriots to a 27-16 victory on the road at the Pittsburgh Steelers. This leaves them with an impressive 6-1-0 record at the top of the American Football Conference (AFC) East.

Also in that group are the Buffalo Bills and the Miami Dolphins, who came together to produce a tight game which resulted in a 28-25 victory for the Dolphins, with Miami’s London-born running back Jay Ajayi completing a huge 214 rushing yards. Fellow AFC East team the New York Jets produced a fine 24-16 win over the Baltimore Ravens, but it was not enough to see them climb off the bottom of their division with two wins and five losses (2-0-5).

Following that defeat for the Ravens, the Cincinnati Bengals inflicted a seventh straight loss upon the Cleveland Browns in an all-AFC North clash, to move onto an equal record with Baltimore and just one win behind Pittsburgh.

Also in the AFC, this time in the South division, a win for the Indianapolis Colts over the Tennessee Titans to the tune of 34-26 meant that both sides now have three wins and four losses on their regular season record.

Remaining in the AFC South with the Jacksonville Jaguars, two touchdowns for the Oakland Raiders’ Latavius Murray saw them overcome the ‘Jags’ 33-16.

Two games combined an NFC team with AFC opposition, with both AFC teams coming out on top in their respective games. The Kansas City Chiefs beat the NewOrleans Saints at home 27-21, and the San Diego Chargers inflicted a 33-30 over-time defeat upon the Atlanta Falcons, thanks to a 42-yard field goal from kicker Josh Lambo, overcoming a 17-point deficit at half time.

The final matchup of week seven took place on Monday night, with the Houston Texas of the AFC South matching up to the Denver Broncos of the AFC West. The 27-9 success for the Broncos gave them their fifth win of the s
eason, whereas the Texans suffered their third defeat, although they still maintain their lead atop their respective division.

The Dallas Cowboys and the Carolina Panthers return to action next week against the Philadelphia Eagles and the Arizona Cardinals respectively, with both teams being at home.

The match-week began on Thursday night, with the Jaguars defeated 36-22 against the Titans in Tennessee, and it comes to a close with the Bears entertaining the Vikings from Soldier Field in Chicago in the latest edition of Monday Night Football.

Other games to look out for will be the AFC East clash between leaders New England and second-placed Buffalo, and the all-AFC West matchup between the Denver Broncos and the San Diego Chargers, in a tight group which arguably sees all four teams in contention for the playoffs.