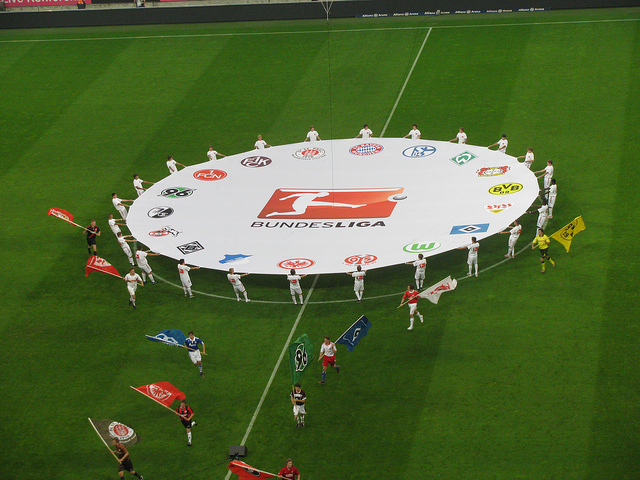 Are they going to rule the footballing world now?

It seems set in stone that no world power lasts forever – Rome fell, England gave up the colonies, and even Anakin Skywalker could not rule the Galaxy for eternity. Yet, who would have expected the end to Spain’s dominion over world football to be so nigh?

A decade after the shiny Gálacticos team, Real Madrid looked rather pale in Dortmund and Barcelona’s defeat through Bayern Munich resembled a fall from grace for the treble-winners of 2009. The purportedly best team in the world even failed to score against the new German champions. AS dubbed this ‘the end of a cycle’. Understandably both the German teams’ performances sparked euphoric excitement at home as well as abroad, but is this really the dawn of a new era? Is the Bundesliga now hotter than La Liga and the Premier League?

There is no doubt that it has been an amazing year for German football and this is a brilliant advertisement that can be of profit to the entire league. Nevertheless, the German success seems different from the reign of Spain and England. In The New York Times Franklin Foer, a journalist and the author of How Soccer explains the world claims that in spite of this success the Bundesliga is not as attractive: ‘There’s a little less internationalism there. The modesty and competence that underlie the whole thing also constrain it from being as sexy as Spain or England.’

I agree. Don’t get me wrong here – personally, I am one of the biggest advocates of the Bundesliga and this is not only because it is the league that I grew up watching. I enjoy the Premier League and awe at tiki-taka, but the German league offers the biggest thrill. It is attractive, diverse, affordable to watch, and offers a great deal of tension and surprise – after all the small-town-club SC Freiburg fiercely battled giant Schalke for the last spot in the Champions League. Most importantly theleague can offer this while staying true to itself and to its fans. With Italy obviously having ruled itself out of the contender for the best league to watch (live) Germany is close to offering the real deal , if it was not for that lack of ‘sexy’ internationalism. Names such as Stefan Kießling (Bayer Leverkusen, top goalscorer) and Alexander Meier (Eintracht Frankfurt, third most goals) are hardly going to excite anyone overseas.

One of the defining discourses of this season was set around the question whether a ‘Spanish’ situation of a few clubs taking the lead was about to emerge, with Munich and Dortmund topping the league once more. Bayern Munich boss Uli Hoeness was quick to condemn such a trend. He called for ‘solidarity’ among the clubs: ‘We think that the big clubs have compromise, even if that causes problems on international level.’ In light of this statement the transfer of Mario Götze – Munich is paying £ 32 million to Dortmund to secure the services of the youngster – may seem fairly ironic. And the lies the rub – thanks to revenues from the international competition, sponsoring and undoubtedly decades of hard work Bayern Munich is the only German club that can afford to splash out a considerable amount of money every season. Very adequately dubbed ‘FC Hollywood’ they offer a taste of that English-Spanish ‘sexiness’ to the league. Due to their excellent football academy, their cadre boasts a considerable amount of home-grown players, but they also have the opportunity to complement it with the most suitable international transfers. It has been a long time since Munich last broke even in terms of transfer sums, which in spite of the fact that the actual value of a player is also determined by contract length can be a decent indicator on annual spending. They only managed to do so once over the last 14 years – in the summer of 2008; Wolfsburg won the league that year. Considering the current situation in Germany which does not allow external ownership only the corporate backed teams (Wolfsburg, Leverkusen, Hoffenheim) could afford this kind of losses on a regular basis. Many have argued that Götze was just another transfer to weaken the opponent – Bayern have repeatedly done this in the past. However, the truth is this time round this is actually not the case. Götze was simply that one transfer that made sense and that can complement a well-rounded cadre.

Now Dortmund officials need to ensure the money is used wisely. The problem that German clubs apart from Munich face is the fact one summer’s wrong spending can easily be the end of a successful spell. Werder Bremen and Stutggart failed to replace Sami Kedhira and Mesut Özil adequately, Wolfsburg suffered from the exit of Edin Dzeko and Grafite and Dortmund got very lucky, having Marco Reus to replace Shinji Kagawa last summer. It is unlikely that there is someone out there who can instantly replace a player like Götze, but whoever is going to join Dortmund for the next season has to. He is going to compete with the Iniesta and Messi, Cristiano Ronaldo and Robin van Persie, and of course Mario Götze himself, otherwise the Champions League revenues will be dearly missed in Dortmund.

Regarding the future of Spanish football it is certain that both Barcelona and Madrid may have to face some hardship in the near future. José Mourinho is not exactly leaving behind an intact team and as sad as it is we also have to acknowledge that the likes of Xavi and Andres Iniesta will not be playing football forever. However, it should not be forgotten that everyone is entitled to a weak season (even Munich only came fourth in 2007). It speaks for itself if a weak campaign for Barcelona includes not only a Champions League semi-final but also the national title. Spain can be expected to strike back.

It is certain that Munich is certainly Pepping up next season in more than one way. They have got Götze, maybe they will get Lewandowski or Rooney, even Neymar does not seem impossible anymore, and a footballing philosophy made in La Masía is certainly not going to weaken them. However, there will be no ‘Spanish’ situation in German football. These signs indicate Bayern Munich – and only Bayern Munich – have finally established themselves in a position that has been a long time coming. The only missing link to place them among the Spanish Big Two and the English Big Four is that one title that they want so desperately.

Nevertheless, it has undoubtedly been a great year for German football and the national side boasts some promising talents that will surely put their mark on Brazil or perhaps on France but it is not a beginning of a new era. On the contrary, I believe this Champions League campaign has taught us something refreshing but fundamental to football. It is only a game of eleven people against eleven people trying to get a ball behind a line. Even Lionel Messi – or Mario Götze for that matter – cannot change that. Secondly, anything can happen in football, even the impossible. Otherwise Borussia Dortmund would not be playing in this final, but a Spanish team – Malaga or Madrid – would be.