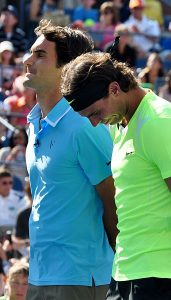 When you think about the best tennis rivalries, there are many that stand out: Borg and McEnroe, Sampras and Agassi, Henman and Wimbledon semi-finals. These great match-ups are all remembered very fondly by tennis fans around the world for so many reasons, whether it be for the entertainment value, the intense battles, or the heartbreak and delight that came with every meeting. However, when you compare these duels to those of Roger Federer and Rafael Nadal, it becomes quite clear that the current World number one and two have formed the greatest rivalry of all time.

They are the two best players the game has ever seen, and for twelve years, the Spaniard has always seemed to be one step ahead of his Swiss counterpart. Coming into 2017, few would have thought that Federer or Nadal would be able to challenge for the top titles and rankings, with Nadal struggling for form and fitness, and Federer spending six months out of the game due to injury at the end of 2016. Pair this with the fact that Andy Murray and Novak Djokovic dominated the sport in 2016, it would have taken a very brave person to predict that after 10 months of the 2017 season, Rafa and Roger would hold all four grand slams between them and still be producing some of the best matches of their careers. And yet, that is exactly what has unfolded.

The head-to-head record between the pair sat at 23-11 in favour of the Spaniard at the beginning of the season, a dominance that no other player has enjoyed over the Swiss. Nadal’s infamous topspin forehand has been a constant bane to Federer over the years, pushing him back and attacking his backhand side. The defensive skills of Nadal have made Federer’s usually unstoppable forehand less powerful, restricting the number of free points that he can gain from his favourite shot.

As well as all of this, there has seemed to be a slight mental block for Federer when playing Nadal, almost as if he has sometimes lacked belief that he could actually beat his foe. All in all, I am painting a fairly bleak picture for the chances of Federer when he faces Nadal. It is because of these reasons that I predicted Nadal would win all of their four meetings this year before each match, and each time I was proved wrong. Federer has completely transformed their match-up. During the Shanghai Masters final last week, Federer’s brilliance simply left Nadal looking clueless. He had no idea how to break Federer down, plain and simple. The only thing more surprising than the return of Federer and Nadal to the top of the rankings is the way in which the Swiss player has dismantled Rafa this year.

So how has Federer done it? It’s a good question. Well, the biggest reason is his backhand. You cannot say that this shot is a particular weakness for Federer, but when playing Nadal, it was a punch bag for the Spaniard. The heavy topspin from Nadal’s forehand would jump up on the Federer backhand, meaning that he never had a chance to get inside the baseline and use his more powerful forehand, basically handcuffing him. It also caused him to slice a lot more on the backhand side, which combined with the fact that he would be a long way behind the baseline, meant that Federer was playing a far more defensive game than he’d prefer to. Fast forward to this year, his backhand looks like a new shot. He is standing much closer to the baseline, holding his ground in the rallies with Nadal and taking the ball much earlier, which stops the heavy topspin from doing its damage. This has allowed his backhand to become an attacking weapon, causing real problems for Nadal. The Spaniard would always go to the Federer backhand when the pressure was on, but he no longer has that option.

When I watched the pairs four meetings this year, there was something else that was quite noticeable. The quality of Federer’s returns has improved massively. It is very similar to his backhand, as he starts much closer to the baseline, taking the ball early and giving Nadal no time on his second shot. The chipped backhand return was a very common shot for Federer in years gone by, but he is using it far less against Nadal now, opting for the flatter return. It must be said that this change in style has been helped by Federer’s change of racket. A few years ago, he changed to a larger racket head size (97 square inches), which in his own words gives him more power. It seems as though this new racket has given Federer the confidence to change his style of tennis without losing consistency.

So that’s just a couple of ways in which Federer has turned the tables on Nadal. But what is there to say about the Spanish World number one. He has had one of the best years of his career, his forehand is back to its best following a dip in form on that particular shot and he is playing the big points with far more confidence. In 2015 and 2016, he looked uncharacteristically nervous on big points, causing double faults and simple errors. That’s gone from his game. Nadal is playing every point as he did back when he was a teenager, without fear. However, he hasn’t been able to compete with Federer, perhaps the only negative point that he can take away from this year so far.

Let’s be honest, Rafael Nadal is one the best fighters the game has ever seen, he has suffered setbacks that would end many players’ careers, and yet he comes back stronger each time. He will not be satisfied with this year until he has figured out a way to defeat his Swiss rival. It is just very difficult to see how he will do it. If their matches in Melbourne, Indian Wells, Miami and Shanghai have taught us anything, it’s that you don’t want to miss their next battle.