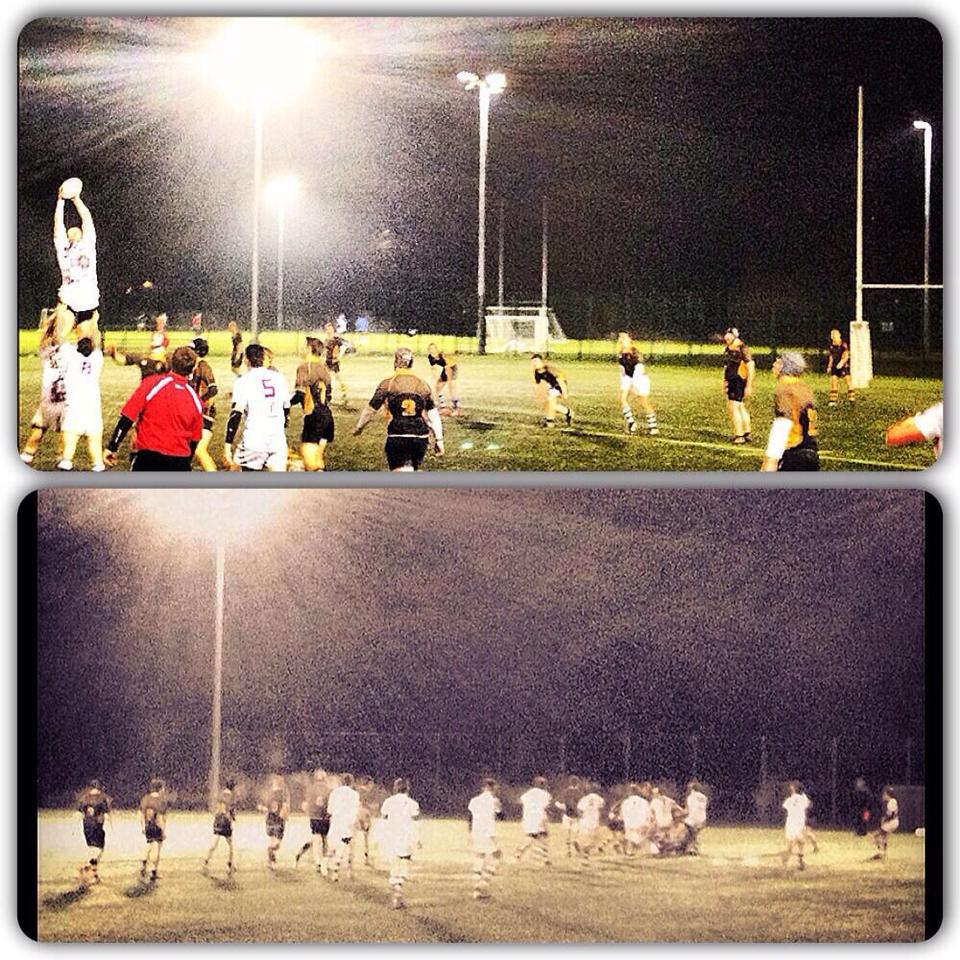 Friday the fifteenth of November, 2013, brought with it many things- a temperature drop, some rain maybe- but for the St. Aidan’s College Rugby Football Club, the night brought with it victory.

The night displayed an intense ‘King of the Hill’ Derby, for the first time in two years, between SACRFC and VMCRFC. With crowds of bundled up supporters on the sidelines, the pressure was on the boys, and despite a disappointing start, the Aidan’s rugby A-Team performed for their fans.

However, many obstacles had to be overcome to achieve the victory. Everything seemed to be working against the Aidan’s boys, the formidability of the Mildert rugby team aside. Mildert definitely had size over Aidan’s, their boys towering over the to-be victorious- but also begun the game with a lead, scoring a try and penalty early on, reaching 8–0 in minutes. Aidan’s retaliated and managed to keep even with Mildert, leaving the score at half time at an infuriatingly close 15–16.

The second half displayed the Aidan’s boys’ physical capabilities and mental strength, with them managing to keep the pressure on through the second half, not allowing the determined and still-fighting Mildert to score, even securing two further penalties and putting the score at 15–22.

While the score suggested a comfortable cushion, another obstacle struck, and Aidan’s had to continue fighting until the end. In the final minutes of the game, Aidan’s found themselves down two men, fighting against an unwaveringly determined Mildert with only thirteen players. If that wasn’t enough of a hindrance, Mildert kept the ball down on Aidan’s end, simply metres away from the line, fighting for a try, which would equalize the score.

Aidan’s managed to stay strong, the taste for victory on the tips of their tongues, and after ten tense, nail-biting, seemingly never ending, minutes, the final whistle was blown, and the crowds proudly cheered as realization struck, and the team roared in triumph.

The Bubble talked to Co-Captain, Elgan Alderman, and got the low down of the night:

1) How did you feel going into the game against Van Mildert? Did you feel confident in the team, or were you wary?

We were very confident going into the Mildert game. It has been a big step-up this season into the Premiership, and our results have swayed from the heroically victorious to the disconsolately defeated. However we know that on our day we are a match for any team in the league, as was shown last year when our match against Collingwood- one of the top teams in college rugby- went all the way to the wire despite being in the division below them. Floodlit Rugby always brings the best out of us. We always get a big crowd, which dwarfs that of the opposition. Everything tends to click into place when the floodlights turn on. The dangerously unpredictable nature of Premiership rugby this year also added to our belief. Results this season aren’t really playing to any form book. Everyone is beating everyone without any apparent rhyme or reason- with the possible exceptions of Hild Bede- so there is confidence going into every game.

2) Were there moments you felt Aidan’s would not pull through?

The dying minutes were very tense. Up until the final ten we were in complete control. Unfortunately, I had to leave the field for blood, whilst Captain Nick Sidwell and Ollie Smith were both sin-binned during Mildert’s relentless onslaught. But even with the three captains off the field and a two-man disadvantage, we always looked fairly comfortable, if it’s at all possible to be comfortable when you’re camped on your own line for five straight minutes. Our first Premiership victory against John Snow had ended in a similar manner so we knew we had the mental and physical resolve to hold out.

3) Is there anything you would like to say to your team? Any possible ‘man of the match’?

Bloody well done. It’s difficult to pick a Man of the Match when the team plays so well as a collective, but particular congratulations to our fly-half Pete Henshall who didn’t miss a single kick, slotting 17 points and keeping the scoreboard ticking over..

4) Does the team have any pre-game traditions?

We tend to do an identical warm-up before every game. Same meet-time, same warm-up, same drills, etc. Other than that, it’s simply a case of getting pumped for the game, normally during the pre-match huddle. Before a Floodlit game, the huddle is one of the most intense surroundings in which you can find yourself.

5) What can the crowds expect of Aidan’s in the future?