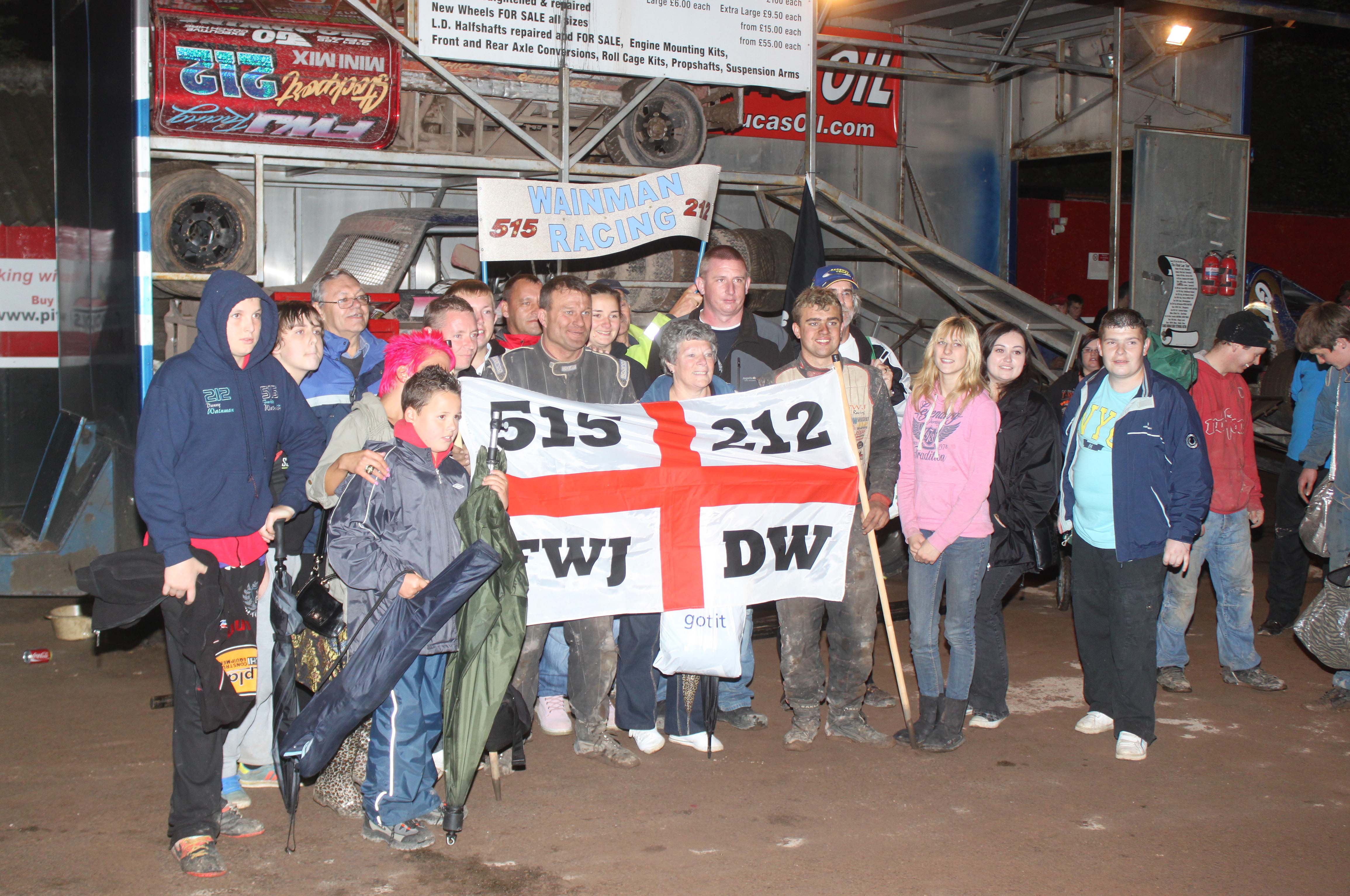 Finding a photo to sum up an entire season is very difficult but the ‘family feeling’ is always present. This shows some of my friends, the Wainmans and me. Photo by Anthony Jenkins.

During 2012, the world saw Queen Elizabeth II’s Diamond Jubilee, the London Olympic Games and a huge number of other notable events. This was mirrored in the BriSCA F1 world. We had our own Jubilee, several surprises and as much action as the Olympics.

From the beginning, BriSCA fans knew that this season would be different for one simple reason: no Andy Smith. The five time world champion announced that he would be retiring at the end of 2011. His brother, Stuart Smith Junior, also decided to limit his racing to certain tarmac meetings; only appearing once on shale for his Semi Final. These two drivers had been at the forefront of racing for years and had one of the largest fan bases ever seen. The lack of Smiths around the BriSCA circuits was met with mixed feelings. However, the majority acknowledged that it would not be the same without them.

Following Andy Smith’s departure, his shale car was purchased by Mick Sworder. This set the second biggest change of 2012 in motion: Sworder on shale. The former F2 World Champion completed his first full F1 season in 2011, only competing at tarmac venues. It was clear from the onset that he was going to be successful in the BriSCA F1s, claiming the European Championship within months. From the beginning of the year he showed he could handle the pace on shale as well. Despite having an overall successful 2012, Sworder did not pick up any championships, much to the surprise of many supporters and drivers.

About half way through the season, the title races started cropping up. July was an extremely busy month, with the British Championship, European Championship and the two Semi Finals on consecutive weekends.

August saw the Brits taking the titles in the Netherlands. A large number of top UK drivers made the trip to Venray for the World Cup. Despite some not having raced there before, all were extremely successful. All of the drivers who competed over the World Cup weekend deserve a mention. Anyone who can keep it together in temperatures over 100ºF is a champion in their own right.

By the time the World Final came around, there had already been a remarkable amount of action. This weekend was no exception. The shock win by reserve driver Lee Fairhurst will go down in the history books.

September also brought two extremely special events for anyone who has followed the extraordinary career of Frankie Wainman Junior. 2012 marked Frankie’s Silver Jubilee in F1s. Over these 25 years he has become one of the most successful and respected drivers in the sport’s history. He is the only driver to have collected trophies in the UK, The Netherlands and New Zealand. Whether you love or hate Wainmans, you cannot deny Frankie’s pure dedication to the sport.

Fans were invited to an open day at the Wainmans’ farm in Silsden. Jumping on the opportunity, hundreds travelled from far and wide to this Stock Car Mecca. The day was fantastic. We all had the opportunity to talk to the drivers and team, walk around the workshops, hunt for past treasures around the farm and try our skills at getting in and out of the cars. Some were much more successful at the latter than others. One personal highlight of the day was watching my Dad present Frankie with a painting portraying his 25 years of racing. Having seen the painting progress over months, I could not have been prouder. Frankie’s wife, Sam, and their son, the new Ministox Champion, Frankie Junior Junior, were also presented with memorabilia. Festivities at the farm continued into the evening.

The following day was Frankie’s special 25 years anniversary meeting at Belle Vue Stadium. This included celebrity races from the ‘Class of ‘87’. Several drivers that were seen on track during Frankie’s premiere year donned their helmets and raced just like they had never left. Included in these was Frankie Wainman Senior who retired in 2007 after 37 seasons in BriSCA F1. Witnessing Frankie Senior take to the track once more was a highlight of the weekend for family and fans alike.

After the celebrations in September, the drivers became focused on the Shootout championship. Once again, this came down to the last round of the championship. When the gates opened at Belle Vue Stadium, any of four drivers could have walked away with the silver roof. The day was full of hard racing. By the final race of the day, it was down to two competitors. Young gun Tom Harris inched ahead from the perennial Frankie Wainman Junior to take his third championship of the 2012 season.

The season proper drew to a close on 17th November at Birmingham Wheels Raceway. However, there will be a couple of chances for fans to get their BriSCA fix over the closed season. Coventry Stadium will be holding their annual Christmas Cracker event on Boxing Day. Stock cars will also feature in displays and on track at the Autosport International show at the Birmingham NEC in January.

The drivers, families and teams have started their well-deserved break. However, everyone is already wondering what 2013 will bring. Some things are certain. New cars will definitely be debuted and new drivers will enter the stadiums for their chance to follow in their heroes’ footsteps. The younger drivers will continue to make progress and the Superstars will carry on showing everyone why they have the flashing lights. Racing families will come together once again to show their continued support. There will be euphoria and heartbreak for different people each weekend. Most of all, no one will be able to predict what excitement will unfold.

Throughout these articles I’ve tried to show the magic of the BriSCA world. There is one BBC video that does this perfectly: http://www.youtube.com/watch?v=Dw2fs_h09Yc