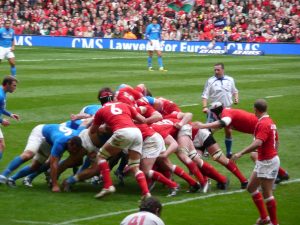 Conor O’Shea’s tenure in charge of Italy began with promise when they beat South Africa for the first time in 2016, but a winless 2017 Championship restored the negativity that has surrounded Italian rugby since its inception into the Six Nations in 2000.

Italian optimism – inspired by their positive and innovative coach – will stem from the improved results of Italy’s two club sides in the Pro14 and the hope that talismanic captain Sergio Parisse can inspire the inexperienced team around him to a win or two.

Italy’s perennial struggles at fly half must be addressed in this tournament, whether it be through the form of Tomasso Allen or Carlo Canna. In Blake-Bortles fashion (for NFL fans), too many games have been thrown away by the chief decision-maker on the pitch and if any clarity can emerge in this position, O’Shea can take positives moving forwards.

Player to Watch: Edoardo Gori – the Benetton scrum half is one of Italy’s few standout players and he must control the tempo and take pressure off his half back partner if Italy are to have any success in this tournament.

Much has been said and written about Scotland’s form heading into this year’s Championship, including by myself. Gregor Townsend’s side possess real flair in the backs through the Paris-bound Finn Russell and the ever-impressive Stuart Hogg with. The returning Greig Laidlaw faces stiff competition at scrum half with the sniping Ali Price of Glasgow.

Success in this tournament will, however, depend on the forwards who must front up and dominate to create quick ball for their exciting backs. A strong lineout is imperative; Stuart McInally is imposing in the loose but must throw accurately, whilst the tireless Jonny Gray must be at his dogged best in the second row.

Scotland’s biggest game will be the arrival of England on 24th February at Murrayfield in Round Three. If Scotland are to prove their international credentials at this level, they must find a way to win in a fixture in which they have struggled for a generation.

Player to Watch: Stuart Hogg – The Glasgow full back is amongst the finest exponents of the counterattack in world rugby who can light up any game. His timely return to fitness after a stuttering season for Glasgow transforms Scotland into a real force and will be central to their efforts in the 2018 tournament.

Wales’ build-up has been dominated by injuries to first-choice half backs Rhys Webb and Dan Biggar, as well as to second-choice fly half Rhys Priestland. It’s a great opportunity for Scarlets’ Rhys Patchell to take his opportunity at this level, as he is set to be given the nod ahead of Gloucester’s Owen Williams.

Pro14 champions Scarlets have been immense in Europe this season, earning themselves a home quarter final whilst playing some scintillating rugby. It will be interesting to see whether any of that attacking flair is replicated in test rugby as ten Scarlets will start in the opener against Scotland.

Wales showed encouraging signs in the Autumn, beating South Africa. Supporters will be desperate to see further improvement after a disappointing 2017 Six Nations.

If young players like Josh Navidi and Steff Evans can prove themselves on the international stage, Wales can feel quietly confident about their state of affairs 18 months out from the World Cup.

Player to Watch: Steff Evans – the Scarlets wing is a wonderful player and Wales will try to get the ball in his hands as much as possible. He had a nervy Autumn series but expect him to much improved in the Six Nations, as he will look to establish himself in a Wales shirt.