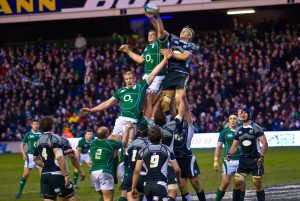 After their emphatic 53-24 thumping of Australia on Saturday, former Bath and England back Jeremy Guscott described Scotland as entering a ‘new era’ and that they would be challenging for the 2018 RBS Six Nations. Indeed, several others have praised the Scots for their performances under new Head Coach and former player, Stuart Townsend, which include victory over the Wallabies in Sydney in June, and their performances this month – a narrow defeat to world champions New Zealand and a demolition of Australia.

On some levels they look a vastly improved team. Stuart Hogg and Finn Russell look electric as playmakers; the former established as one of world rugby’s premium talents, whilst the latter has recently earned himself a huge contract at Racing 92 to replace none other than New Zealand’s own Dan Carter. Even without Hogg due to injury against Australia, Scotland still managed to dominate in impressive fashion.

There is an air of excitement around Murrayfield with the conclusion of the November Tests and a sense of optimism ahead of the Six Nations in February. Some of this excitement, however, is entirely premature.

The dismissal of Australian prop Sekope Kepu for a shoulder charge on the stroke of half time on Saturday completely changed the nature of the contest and the emphatic score line reflects little about the difference between the teams to that point. Australia were up 12-10 before being reduced to 14 men and up until then, Scotland had flattered to deceive with their perennial combination of flashes of brilliance and frustrating errors that have epitomised their play for the last decade and a half.

Besides, this was a poor Australian side without the influential Israel Folau and David Pocock, whilst halfbacks Will Genia and Bernard Foley had uncharacteristically poor games. They are a shadow of the side that reached the 2015 World Cup Final. The green and golds conceded 40 points to the All Blacks in the first half of a Bledisloe Cup match in August and have now lost five successive games to England.

Scotland themselves are not the exciting team which many suggest they are. Ali Price has impressed at scrum half this November, but the imminent return of the dreary Greig Laidlaw from injury next year will signal the return to the lethargic and predictable attack of previous seasons.

For too long, they have relied on Stuart Hogg for offensive impetus, whose absence could be seen on Saturday, despite the heavy margin of victory. Points were scored at the expense of a demoralised Australian pack and in the loose where the man advantage was abundantly clear.

Finn Russell’s performance against Australia was a microcosm of his career. Flashes of brilliance, such as his instinctive tap and go that led to the Huw Jones’ try in the 57th minute, was mixed with missed touches and nearly-intercepted passes. His talent is unquestionable, but he is not the sort of stand-off who draws comparisons to the likes of George Ford or Jonny Sexton.

I quarrelled with a Scot in June on social media, arguing that three Scotsmen selected for the Lions tour of New Zealand was too many. One tourist was Tommy Seymour: a winger who looks more suited to the U16 B team in which I played, than facing the Southern Hemisphere heavyweights. His unforgivable handling error led to the second Australian try, and a string of errors against New Zealand seven days earlier led to collective groans in the pub where I watched the game. Surely his selection for the Lions was a political consideration to bolster the Scottish contingent in the squad.

It is a sad indictment of Scottish rugby that a player as maladroit as Peter Horne started at 12 (inside centre) on Saturday in the absence of others such as  Alex Dunbar and Mark Bennett. Tevita Kuridrani slipped through a weak tackle from the Glasgow man in the corresponding fixture in 2016 which cost the Scots the game, and he looked out of his depth in the first half this year.

That these players are not criticised is due the lack of scrutiny Scotland face in the media. Expectations are so minimal of Scotland – a side that in 2013 slipped below Italy and Tonga to 12th in the world – that pundits and journalists fail to pass fair judgments on this poor team. Listening to the one-dimensional views of Andy Nicol and Chris Paterson on BBC coverage would indicate that Scotland are on their way to becoming one of the world’s top teams.

This sort of premature optimism is not a novel concept in recent times. After home victories to Ireland and Wales in the Six Nations earlier this year, Scotland were tipped to impress at Twickenham and challenge the Grand Slam holders, England. Eddie Jones’s men emphatically put over 60 points on the scoreboard in a rampant display.

Clearly there has been an upturn in Scottish Rugby in recent times, but its progress is not what some have made it out to be. They have produced mixed performances in the past three games; a narrow win against a poor Samoa who were humbled by an experimental England side on Saturday, an encouraging but ultimately unsuccessful defeat to New Zealand, and a Test against Australia decided by the Television Match Official (TMO) in the 40th minute.

If Scotland are the team that some are claiming them to be, then they must challenge England and Ireland for the Six Nations Championship. If they do, I will eat my words, but the lack of quality all over the pitch compared to their European rivals suggests to me that it will be yet another tale of failure for Scottish Rugby.