The sacking of Claudio Ranieri – the modern game at its worst 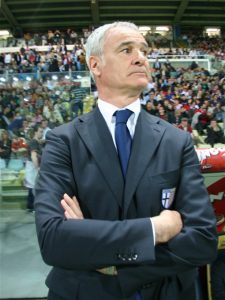 The clock ticks by. It is the eighty-third minute of the game, and Chelsea’s Eden Hazard has the ball with his back to goal, in his own half. The superstar of the previous year has had the worst season of his career. From being the best player in the country, he has become a laughing stock, such has been the abysmal nature of his and his team’s performances. And yet, something happens in that eighty-third minute. Something that is simply meant to be. Hazard, with his back to goal, is going nowhere. Suddenly, the man who has been chasing shadows of his past glories finds himself again. The burst of pace returns, the swagger crawls back into his gloriously talented feet. He leaves the white shirts of Tottenham struggling to catch their breath. He is surrounded and yet he carries the ball effortlessly through the opposition half. He finds Diego Costa with a pass that splits two Tottenham players. That isn’t the end of Hazard’s little journey. He surges into the box. Costa lifts his head and sees Hazard.

The next few moments are what you might call paradoxical inevitability. Here stands a man who has appeared almost frightened of scoring over the past nine months, lost like a rabbit in the headlights. And yet, this has been a season where all sense of reason has been thrown out of the window. The ball reaches Hazard. He doesn’t need to take a touch to settle himself. He knows exactly what he wants to do from the moment that ball leaves the feet of Costa. The whole world knows what he is going to do. He is going to send that ball into the top corner. He is going to make Claudio Ranieri a bride, not a bridesmaid. He is going to make Leicester City champions of England. It is football, and my word, it is romantic.

It is the 23rd February 2017. We are back in reality. Leicester City are back in reality, and they sure aren’t enjoying it. The smiles of last year have turned to tense grimaces. They find themselves hovering just above the relegation zone with just thirteen games left to save their season. They have won five games all year. N’Golo Kante now wears the blue of Chelsea. Riyad Mahrez seems to be doing his best Eden Hazard impression. The speakers at Jamie Vardy’s party have burst. Ranieri’s press conferences are no longer ones filled with laughter and amusing quips about pizza.

The pressure has been mounting, but surely not? Why would you tell a miracle-worker to pack his bag and head off home? The fear has set in, and the bells are ringing.

Relegation has become to be seen as something irreversible in the eyes of owners. It doesn’t just mean a loss in pride but a loss in financial opportunity. It isn’t simply a stain on the badge, but a stain on the end-of-year financial reviews.

It is the 23rd February and it is the day that Claudio Ranieri is sacked. Perhaps, the incoming manager will rejuvenate the players and save them from embarrassment. Perhaps, it turns out to be a sound decision by the owners. Perhaps, it is just the nature of the modern game. Perhaps, football just isn’t that romantic anymore.