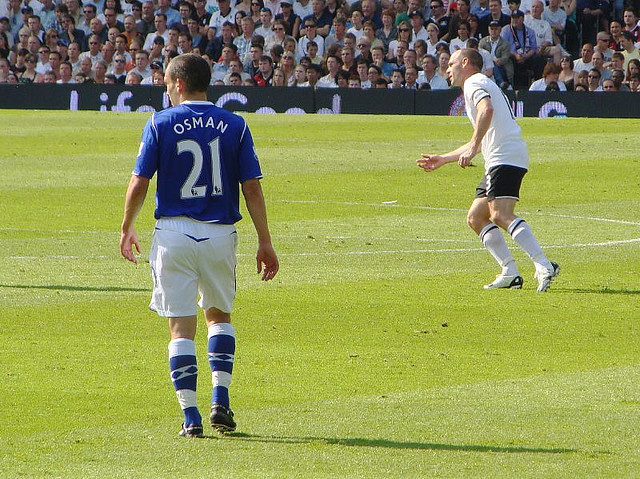 This season has been well and truly one of two halves – giving this award in January, the only candidates for this award would be Gareth Bale, Samir Nasri, Dimitar Berbatov and Rafael Van Der Vaart. Fast-forward to the end of the season, and none of those were even considered for my list of players of the season. As these players have faded, it has in fact been the year of the understated cult hero; players who, loved by their own fans, are often overlooked in favour of the brief flashes of brilliance of their teammates. This season, however, they have emerged to the forefront of their team’s operations, playing a vital role in their successes (or in West Ham’s case, being still in the relegation fight in May). Forget the Wayne Rooneys, or even the Carlos Tevezes of this world, these are the players that make their respective teams tick.

A fairly obvious choice, but one that nonetheless epitomises the role of “midfield powerhouse”, and is the embodiment of team spirit. Without him, I fear that the Hammers may have been relegated in February. He has scored vital (and rather special) goals, put his body on the line on countless occasions for his team’s cause, and effectively carried his teammates’ sometimes dreadful performances. The most determined and wholehearted player in the Premiership, he even made the headlines for an inspirational team talk that galvanised West Ham to come back from 3–0 down against West Brom; maybe if he’d managed all year, his team may not have been relegated (eat your heart out, Avram). All he needs now is a decent haircut.

The unsung hero of Spurs’ midfield. Whilst Gareth Bale and Rafael Van Der Vaart took the plaudits, the Croatian quietly and assuredly orchestrated the midfield; his passing quality is consistently exceptional, and his tenacious defensive game often does not get the praise it deserves with his doggedness often depriving opponents of the ball. He is a defining influence week-in week-out; if Spurs wish to have any top-four aspirations next year, they should feverishly reject any approaches for their talisman – even Bale is less important than Modric in the Londoners’ style of play.

A surprise package in many aspects – but with Everton’s hugely depleted squad, deprived of many attacking players, Osman stepped up to the plate with his persistent refusal to play by the “script”. Often carrying the burden of Everton’s entire attacking line-up, he has scored some important goals, namely his fine headed second against Manchester City in April, and put in some fantastic shifts for his team. He has almost assumed the talismanic role of Tim Cahill in his lengthy absence, and his majestic performances in the latter half of the season mean that an England call-up would not be a surprising turn of events, even at the age of 30.

With the likes of Carlos Tevez and Mario Balotelli stealing the headlines at Eastlands (the former for mostly good reasons, the latter for the wrong), it has been a tremendous season for Manchester City. Great praise though must go to Kompany, Roberto Mancini’s rock in the centre of defence, who must be recognised for his part in City being the most solid defence in the Premiership, conceding a measly 33 goals all season. The Belgian has lead by example, putting his head where it hurts and restricting some of the best strikers in the world to a pittance of service (highlighted especially in his neutralisation of Wayne Rooney in the FA Cup semi-final). Not only has he raised his individual game, but has encouraged confidence in a previously questionable defence, with Joleon Lescott and Micah Richards also having impressive seasons, and he thus thoroughly deserves his vice-captaincy (potentially even full captaincy depending on Tevez’s whereabouts after the summer), and should be the stone by which Mancini builds his ever-expanding squad.

How the Serb did not win player of the season is beyond me. Consistently reliable, powerful and committed (leading him to being awarded the United captaincy on a permanent basis), he is the fulcrum of a mean Premiership-winning defence that conceded only 37 goals all season, and only 12 at home. When you consider that this was also a defence that lacked a consistent centre-half pairing (Ferdinand, Evans, Smalling, Brown and O’Shea have all played there at different parts of the season), it merely enhances the paramount importance that the defender plays in Sir Alex Ferguson’s set-up, and thus to United’s highly successful season.