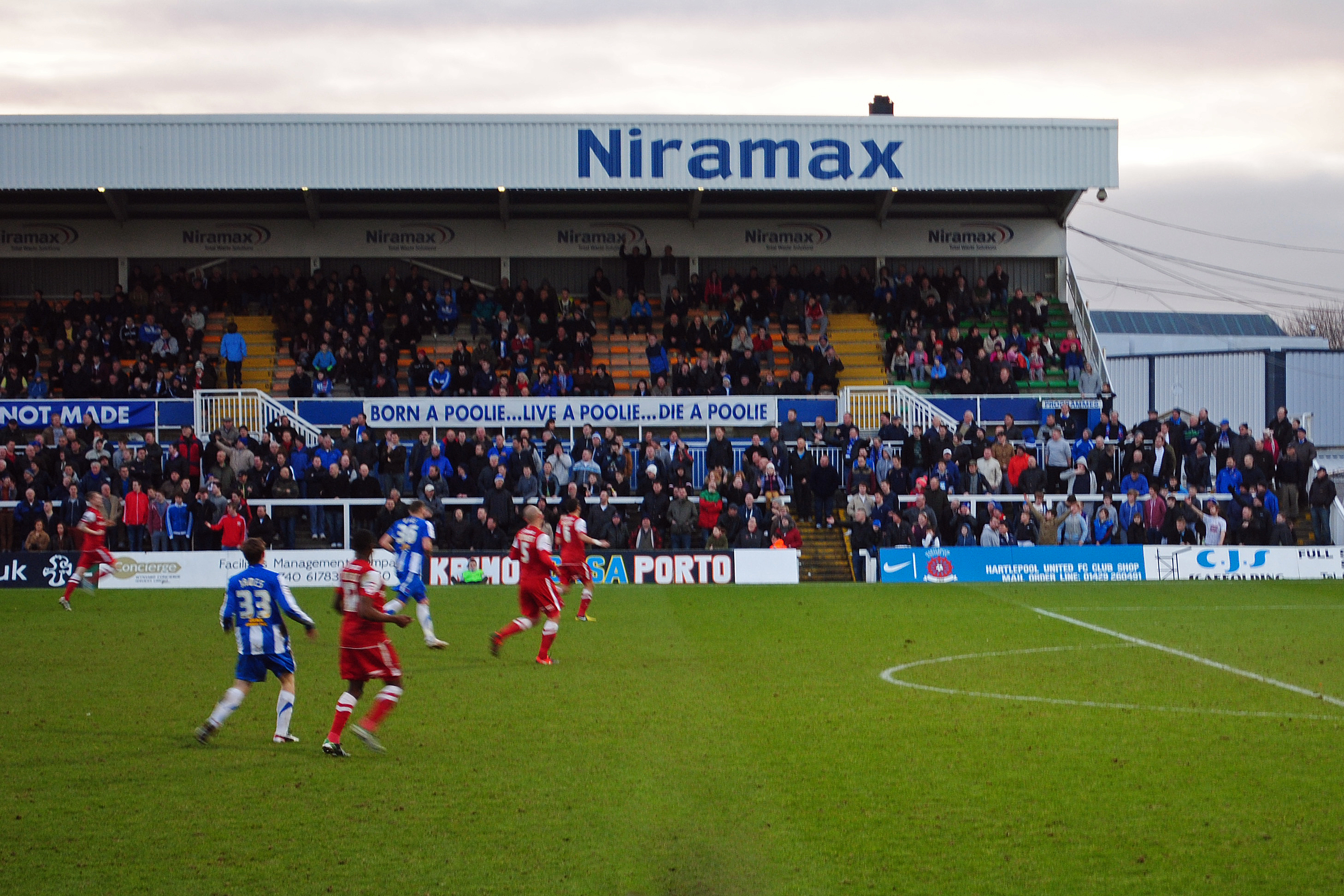 Hartlepool continuing to press, with the scores at 1–1
Photo by Dave Burin

“Football. Bloody hell.” Luke James races away from the Leyton Orient goal, his arms raised in jubilation, before flinging himself onto the floor closely followed by at least five teammates. Victoria Park, the home of Hartlepool United, is awash with noise. Leyton Orient’s fans begin to seep out of the ground in disbelief. After leading the game for 80 minutes, the O’s can only look on as “Pools” (as they’re affectionately known) celebrate that 95th minute winner from substitute James. A half hour previously, James had been substituted onto the field amidst scattered cries of “you don’t know what you’re doing”, aimed at Pools manager John Hughes. As so often in football, all is forgiven, and much is forgotten.

As North-Eastern football trips go, Hartlepool may not have the glamour of Newcastle or the, erm… varied takeaway options of Middlesbrough, but that is not to say that a visit to see County Durham’s only football league club is not worthwhile. It is fair to say that Hartlepool (or at least its town centre) is not particularly beautiful, but nor is it all that bad – a smart-but-dull red-brick civic centre advertising a talk by one of Hartlepool’s sons, ‘Soccer Saturday’ legend Jeff Stelling, an impressively tall war memorial and a giant ‘Wilkinsons’ store are the first things to catch the eye. After a stroll down to the ground to pick up a ticket and a program, I headed into the nearest pub, the ‘Best Western Grand Hotel’, a smart, roomy pub whose late-morning crowd seemed to be mostly older gents in for a pint or three of ale. Coming back after grabbing a quick lunch, the place had filled up, with a strong proportion of the crowd decked-out in Pools’ smart navy-blue away kit; evidence that supporting the league’s bottom side was still more a badge of pride than of shame. Flicking through the club’s matchday program ‘Never Say Die’ (fittingly titled on the evidence of this game!), I was surprised by the frankness of some of the articles, namely that of the club’s Chief Executive, Russ Green, who complained of “unbelievable penalties” given against Pools in two recent fixtures – this program, proving prophetic, preceded another similarly contentious penalty against Pools, within the first 10 minutes of the game. 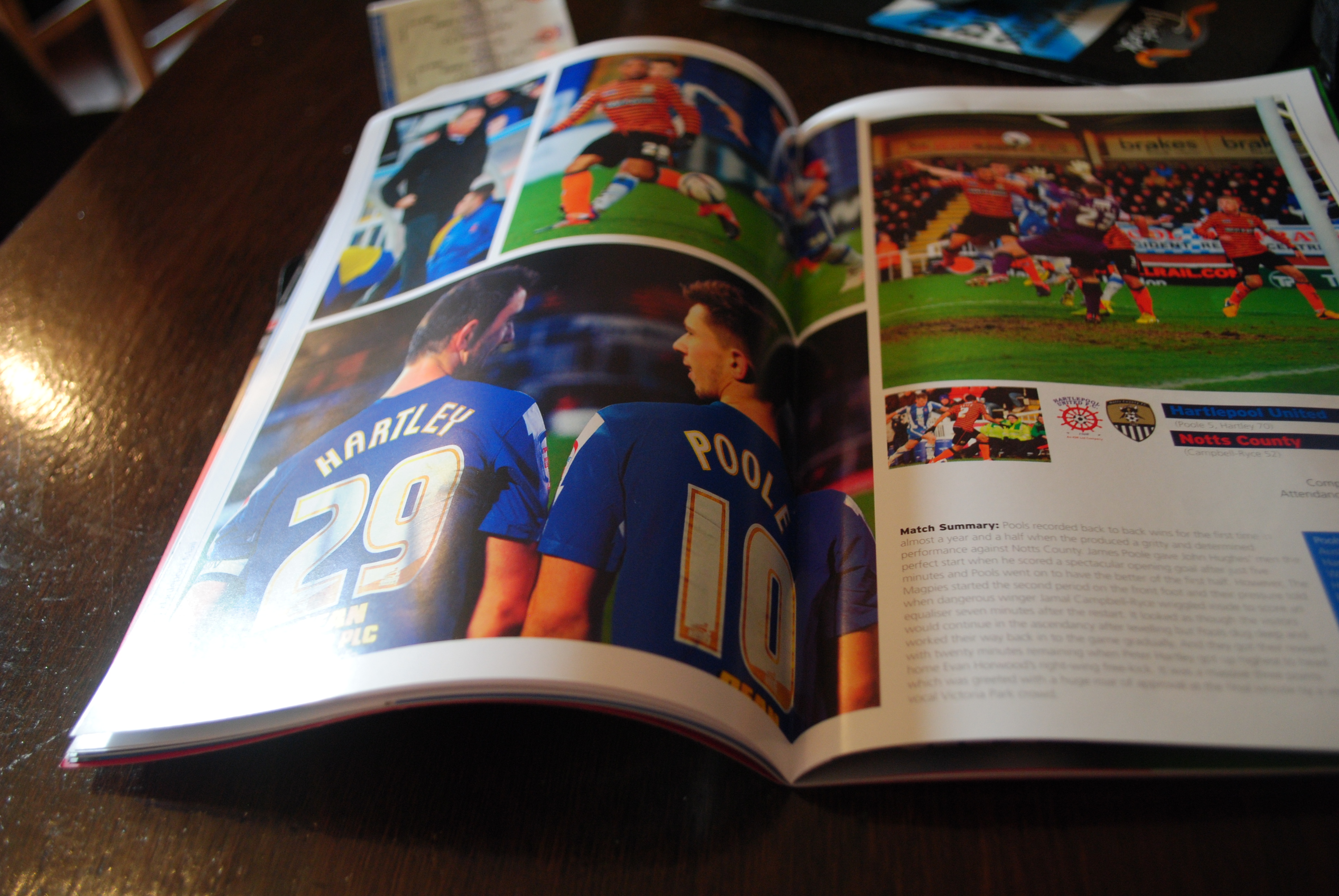 The walk down to Clarence Road, where Pools’ ground is situated was a pleasant one, amidst the sunshine of a very rare warm day in the North East. Having already picked up my ticket from the ticket office by the far corner of the Cyril Knowles Stand (named after the Tottenham Hotspur legend who managed Pools from 1988–91), the ticket itself printed with the hilarious moniker of “Mr. Home Fan” as my name, I headed into that stand to await my first game at the “Vic”.

Perhaps the most overused cliché about football support is that it is “tribal”. That should be enough reason for an English Literature student like myself not to use it – however, it is not. Unlike certain more illustrious clubs in the English football pyramid, the vast majority of Pools’ support is local, and banners upon the ground’s Niramax Stand provided slogans like “One Town…One Passion…One Pools”. The use of the three dots on more than one banner suggested that the exclamation mark has not yet reached this part of the world. The match began with Orient on the front foot, and with the game only six minutes young, a contentious handball decision gave the O’s a penalty, in front of their hardy away support. The evergreen Martin Rowlands slotted it in the right hand corner, and after a four-match unbeaten run, things were looking bleak for the home side. A bitty first-half followed, with both sides enjoying decent possession without properly threatening, though Orient looked the more likely to score, with Hartlepool keeper Scott “Ned” Flinders having to tip over from Sean Batt’s header. Pools looked unsurprisingly lackluster, considering their bottom-placing in League One, with tough-tackling defender Evan Horwood the only notable bright light amongst the outfield players. Orient were unable to add another, despite playing the more promising and more attractive football, with Irishman Dave Mooney at the heart of much of their attacking endeavor.

During a lengthy break in play, due to an injury to Orient defender Gary Sawyer, Hartlepool brought on the experienced duo of Andy Monkhouse and Steve Howard to try to tilt the balance of the game, and little by little, they managed. Still, with twenty minutes left, a couple, who sat just along from me, got up and left. I felt slightly disheartened – if they did not think there was any point in watching the team they clearly knew well, through the final 20 minutes of the game, then it was probably a fairly bad omen for an exciting finale. And, as Pools’ best chance of the game was superbly clawed away by Orient’s keeper, I faintly wondered if the ground’s bar was still open, and what adjectives I would use in this piece to describe the game. Despite having enjoyed the matchday experience, “slightly stale” seemed the most fitting description of the football itself. Then, with less than three minutes left on the clock, Evan Horwood’s pacy corner was directed into the net by a bullet header from Peter Hartley, and the man beside me, who had laughed with frustration at that first-half penalty decision, and sighed his way through more than a few misplaced Hartlepool passes, finally had something to cheer and smile about. The board went up for five minutes of injury time, and suddenly there was a roar about the place. Pools played the ball about with sudden precision and intensity, midfielders bombed forward, and the aging Steve Howard raced forward with a passion and pace I could only replicate in the event of running towards an “Open Bar” before it shut. Finally, Horwood and Monkhouse combined well on the left, to get a ball into the box, in the closing seconds of stoppage time. The ball broke to the feet of Luke James, whose lashed shot deflected low into the net – almost into exact spot where Rowlands’ penalty had glided in – before wheeling away in delight. And in that moment, all 3,500 fans in the home section of Victoria Park were one blur of noise and excitement.

It is moments like this which make football so breathtaking, so wonderful and also so cruel. Such moments are defined by the contrast between the stunned Orient support filing out of the (functional but fairly smart) Victoria Park, and the delight of the Pools fans, chanting, clapping and phoning home in excitement whilst mascot H’Angus the Monkey – the very same mascot voted Hartlepool Town Mayor in 2002 – strolled down the touchline. I have no personal affiliation with Hartlepool United and whether I will ever see them play again in person, remains to be seen, but I can say “I was there” when they rose from the bottom of the League One table, with the most dramatic of winning goals. And all that for a 55 minute bus ride from Durham? I reckon that is worthwhile.

Ground Location: Clarence Road, Hartlepool, TS24 0NQ – [5 minute walk from Victoria Road Bus Stop, which is the terminus for the 57/57(A) service]