Party of Five: Footballing Villains in the Modern Game 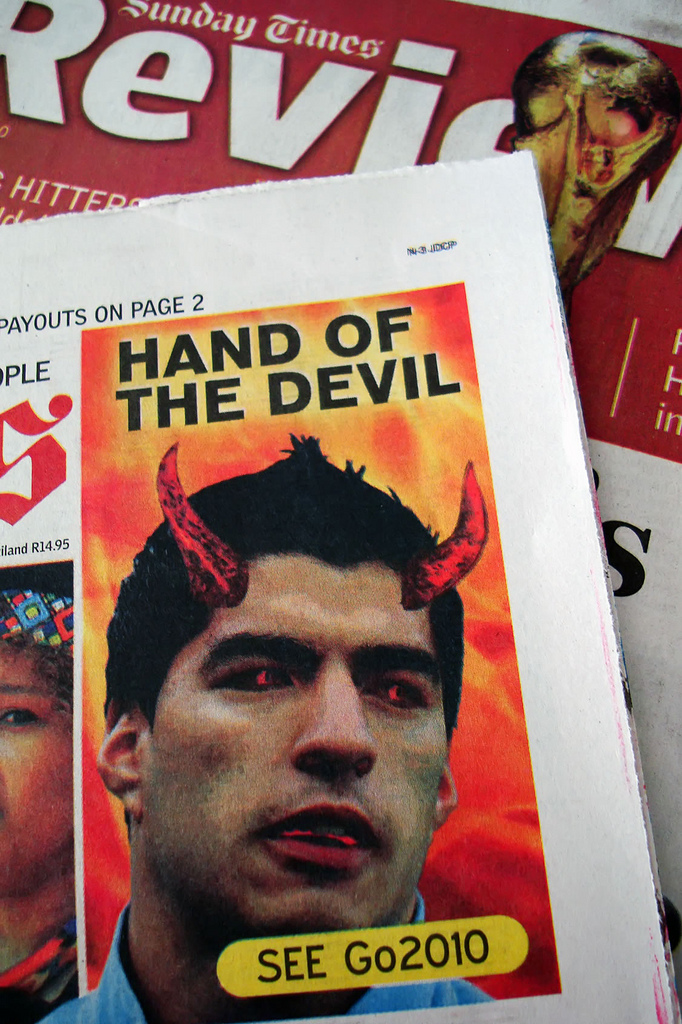 Football transcends mere sporting contest: The drama involved, on and off the pitch, often makes the world of football feel like a massive set for a soap opera; and to fulfil the stereotype, there are regulation villains. The following players have had this status thrust on them for varying reasons.

At the moment, Luis Alberto Suarez Diaz has a decent claim to be the most despised person in the football universe – that is, by everyone but Liverpool fans, to whom he is a hero. For most of the ongoing season, he has been carrying the team on his back. His skill, clinical finishing and win-a- all-costs-mentality has made him a menace to many a defence. Yet it is also this mentality which has contributed to his terrible reputation. Dives, handballs, bites, late tackles, arguing with officials and that one Patrice-Evra-racial-abuse-incident mean Suarez’ name will never be totally cleared. Nevertheless he will remain a hero to Liverpool supporters, who will stand by him as long as he keeps delivering. If he doesn’t, it would be no surprise if they turn on him for bringing the club’s name into disrepute. That’s the hypocrisy in football fans.

To be honest, most of the controversial things Suarez does on the pitch are fairly harmless, if we leave aside the inexcusable Evra episode. In fact they serve the drama: People just love to hate Suarez. Few watchers of the Premier League could sincerely claim to wish Suarez was not playing in it, regardless of their allegiances. He dazzles, he enrages and he gets you out of your seat. The league would be less of a spectacle if he was to leave.

Whereas Luis Suarez has found himself the object of extreme adulation by most Liverpool fans, Barton has found it harder to be accepted at most of his clubs. Now playing in France, he has not been entirely forgotten in his home country, but there is a general sense of Joey-Barton-apathy. When he got sent off in the last game of last season and subsequently kicked, kneed and head-butted his way off the pitch it did not feel like an explosive ending to his English career, but rather a pathetic self-parodying . It was almost as if he was trying to play up to his villain status, whilst he spends most of his time claiming it is undeserved.

In the end, he has just turned into a bit of a joke that no one really seems to care about. Faux intellectual tweets citing deep Smiths lyrics and copy and paste Nietzsche quotes give the impression of a desperate attempt to be relevant. Claims that he has been one of England’s best midfielders of the last 10 years and disparaging remarks about the likes of Gerrard and Lampard further add to the sense that he is just a little bit deluded about his place in the scheme of things.

Balotelli is a tricky case treading the fine line between hero and villain. On the pitch, he fluctuates between match winning performances (think Italy vs. Germany in Euro 2012), and petulance to the degree of letting his side down (think Man City vs. Arsenal at the Emirates, when his sending-off seemingly conceded the title to United). However, it is not really what happens when he is playing that defines Balotelli. Sometimes it is difficult to decipher which of the many crazy stories are actually true, but from crashing his sports car within days of signing for City, setting fire to his house and driving around giving money to the homeless, he is certainly a ‘different’ type of player.

Many find his eccentric behaviour refreshing, but there is a frustration that his actions are a little childlike and this can sometimes come out on the pitch. The accusation most levelled at Balotelli is that he is not a team player, but it always seems to be about him as he has proclaimed himself. To draw a parallel with one of his least appreciated off-field episodes, when he absent-mindedly threw darts at youth team players, he can have a flagrant disregard for others around him. Some may consider Balotelli a hero in the “Ha! What a legend!”-mould but when it comes to the serious side of actually playing football and being a part of a club, he can be the rotten apple which has a negative impact on the whole squad.

Cristiano Ronaldo is one the all-time greats. However, his popularity has never matched this standing. Ballistic scoring records for Man United and Real Madrid have earned him righteous acclaim, yet he seems doomed to suffer the torment of the fact that, being as brilliant as he is, there is always a player a little better than him, and he does not enjoy sharing the world stage. Lionel Messi is the perfect player- clean living, never diving or arguing with officials and getting on with all his team mates. Ronaldo is the antithesis of this, although he has admittedly matured in recent years. English audiences will remember him as the audacious winger who arrived on our shores and proceeded to flop to the floor at the slightest hint of contact and as the player who got his club team mate, Wayne Rooney, sent off in ‘Winkergate’ at the World Cup in 2006.

Now Ronaldo is one of the best paid sportsmen in the world, and recently scored a PR own goal by complaining about life at Real Madrid. ‘Footballer Lacks Perspective’ is by no means a great revelation, but it adds to the negative image of a player who always seems to feel underappreciated. His sense of a ‘divine’ right is too apparent for a lot of people to stomach, especially when you have got Lionel Messi, a picture of humility in spite of his mammoth achievements, as a comparison.

Every team needs a player to do the dirty work. For Barcelona, a team so perfect it is difficult to find fault in them, that man is Sergio Busquets. Shielding the defence, breaking up play and keeping possession are his functions and he sometimes turns to the darker arts. The most detestable thing he has done undoubtedly came in the Champions League 2010 semi-final versus Inter, when his play acting got Thiago Motta sent off. The whole world saw as he writhed on the floor clasping his face, before taking a little peak to see that Motta had indeed seen red. As one of Barca’s stronger players, it is also suspicious that he appears to be the easiest to knock over when his side could do with a free-kick.

It would probably be fair to say that Busquet’s gets a lot of unjust flack based on bitterness and jealousy at just how good Barcelona are. He is an easy target compared to Messi, Xavi and Iniesta, yet this seems to suit him fine. He accepts he is not one of the glory players but he, along with the rest of the team and coaching staff, understands how important his role is. He does not mind being singled out as Barca’s spoiler in chief, as it means he is doing his job properly. In a lot of ways this seems like annoying arrogance but if we look past that, it appears hating Busquets is a thing every party benefits from.