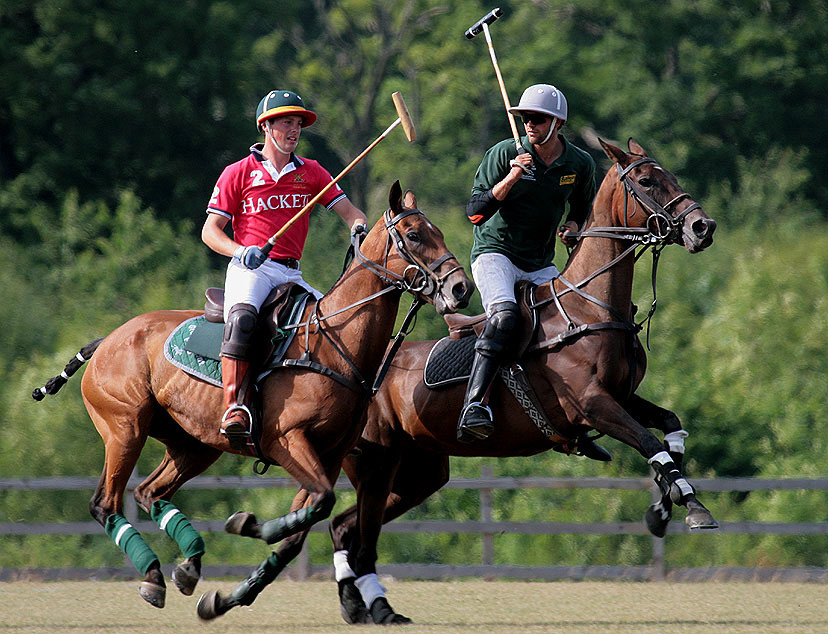 Prince Charles used to play, Harry and Wills still do – along with multiple other members of the British elite. Polo is a complete anomaly in the sporting world in this aspect: being a player is part of your self-identity, a badge that marks you as a member of the upper- super rich. The quality and quantity of your string sorts the men from the boys, or those whose cash is with Coutts from those whose is with Co-op. But don’t bank on this being polo’s first purpose, nor, for once, did the British invent this sport only to be overtaken by the rest of the world.

Polo actually originated in central Asia, in a form similar to the games bangai and buzkashi, which are still played in Afghanistan and Turkestan. The term ‘Polo’ derives from pulu, the Tibetan word for ball. The game, in recognizable form, was popular as early as the sixth century B.C. in Persia, where it was played at major festivals as part of a fertility rite with the ball itself serving as a symbol of fertility. It is impossible to imagine quite what went on during the course of matches, as there could be as many as one thousand men on each team. From Tibet the game came to India, which is where it was learnt by British Colonists in the nineteenth century who then had the nonce to bring it back to Europe, along with various spices and jewels, and, perhaps more usefully, jodhpurs.

Most sports have rather unexpected, peculiar and therefore fascinating origins which aren’t widely known. Badminton was another one to come via colonists stationed in India, where British officers had amalgamated the superbly named ‘Battledore and Shuttlecock’ with a net. It is uncertain at what point the Duke of Beaufort thought he would coin the sport ‘Badminton,’ but it seems likely that one of the first clubs in Britain was perhaps at Badminton House, Gloucestershire.

Another one we bagsied was lacrosse, which travelled our way from North America. The game in its present format stems from a variety of different tribal games, (my favourite being ‘Ojibwe’ or ‘bump hips’) which were usually played between villages, meaning the pitches could range from a few hundred metres to several miles apart. The exact rules were usually determined the night before the game by the leaders of the tribes. This probably explains why the rules today are relatively confusing for spectators. Pre-game prep was treated like war preparation, with players covering themselves in paint and charcoal and Lacrosse matches were indeed sometimes used to settle disputes between tribes. There were many rituals before the game began, including rules about what the players were allowed to consume – definitely the parent of Durham Womens’ Lacrosse Club’s Tuesday night ‘pasta bonding.’ Unfortunately, the women of the tribe weren’t allowed to play the games with the men, but were allowed the privilege of serving the refreshments. They, however, had their own special version, with shorter sticks and bigger heads.

One sport that it seems we can definitely claim as our own is racquetball, a sport with a rather dubious history. It seems that in the 1880s it was particularly popular for men to run up debts they could not pay, resulting in their deportation to a prison designed especially for debtors and their families. Debtors were allowed to take their possessions with them, and often these possessions included tennis rackets. In their boredom, prisoners began to hit a ball against the room’s walls more and more often (perhaps the inspiration for ‘Turley,’ played by Darlip Singh Rana in The Longest Yard…?) with their tennis rackets. Eventually the game grew out of prison and spread to its brother institution: the school. Unfortunately, there weren’t enough racquetball courts to keep up with the demand from players, and so people began to play in much smaller spaces that were designed for handball. The ball properly used for racquets was too hard for a proper game in this confined space, and so one ingeniously came with the idea of, instead of designing a new kind of ball, to poke holes in the one designed for racquets. This had the result that the ball would condense when it came into contact with the racquet before expanding again- the ball would be squashed. And there you have the game Squash Rackets, nothing to do with the refreshing drink at all.

Scoring systems in squash and tennis also have a fascinating etymological story, and also a very British one. Have you ever wondered why in tennis you score against love as opposed to nothing? There has always been a history, in Britain particularly, of doing something either ‘for love or money.’ The theory behind this is that if you do something for love as opposed to money, then you are not very good at it, but play regardless. If you are not very good then you will score nothing: if you play for nothing, then you play for love. It then follows that because you score love (or ‘nothing’), you are a lover, or from the Latin, an ‘amator.’ This somewhere along the line got warped into ‘amateur,’ which is why someone plays sport for the love not the money.