NFL in London: teaser or taster? 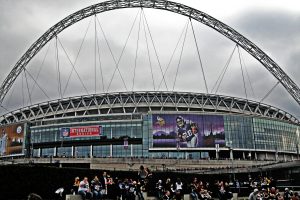 Last Sunday the New York Giants won in London for the second time in franchise history against the newly relocated Los Angeles Rams. The last time they played in London they went on to win the Super Bowl, but they are the only team to play in London and even make the Super Bowl since. This Sunday, the Cincinnati Bengals will “host” Washington Redskins at Wembley, meaning this is the second year in a row with back to back international games. The Jacksonville Jaguars have agreed to play one of their home games in London every year, and the attendance has been better than any of their games in Jacksonville. Every week the National Football League (NFL) on Sky Sports has great viewership. The English-born running back Jay Ajayi, plying his trade down in Miami with the Dolphins, is quickly rising to star status in the league. All this begs the question: is London going to have their own NFL franchise in the not so distant future?

In 2012 the St. Louis Rams, who’s fan base was dwindling, agreed to have a continuous partnership with Wembley to guarantee that they would play one home game a year for the upcoming three seasons. They pulled out of the deal and only played one game at Wembley. Jacksonville, who’s fan base can be described as middling at best, took up the mantle and filled the vacant spot, leading the NFL’s international series into a multi-game era. The Jaguar tickets sell quicker than any tickets do back in Florida, a state with three separate NFL franchises. They are slowly but surely developing a solid fan base in London and all over England, which is more than can be said of the same franchise back home in America.

But why should London get a team over other international cities? Mexico City is the biggest city in North America, with an urban population of over 20 million, compared to London’s eight. Mexico City is also in the same time zone as many American cities, and are hosting an international NFL game this season. Mexico City isn’t even the most viable non-American city for a franchise. If anything, Toronto should be the first team outside the US to have a team. Canada is the largest market without a team, as a much higher portion of the Canadian population watches NFL than the English, despite the existence of the Canadian Football League. Although Toronto’s urban population only reaches just over half that of England’s capital, a Toronto-based team would be the franchise that Canada, and perhaps even the NFL, is so desperately calling out for. Furthermore, in Canada, you do not have the general confusion between gridiron football (NFL and CFL) and association football (pretty much every other football league in the world).

Another issue is the viability of a London team. What effect will the travel time have? How will the players react? The obvious answer is the players won’t be happy. Players in the NFL have a higher degree of control over their fate than they do in European Football leagues, and it is unlikely players will sign in London unless it is for a substantial pay rise. A London team will also have to spend more on travel, more on coaching, and on advertising. They will have to spend to build up a team and a market from scratch. American football is gaining traction in the UK and Europe as a whole. A European team has more potential fans than any American team.

In the end though it will come down to how it affects the TV ratings. Viewership is suffering this year, for no one reason anyone can nail down. A consistent mishandling of player misconduct, a negative public view towards player safety, poor and over officiating, mixed with a polarization of which teams are good and which aren’t have led to a 10% decline in TV ratings just this year. Advertisements are the bread and butter of the NFL, accounting for more revenue than ticket sales or merchandise, and they will not let their precious ratings slip away without a fight. If a London team can help to bring ratings back to where they were, then there is most certainly potential. If they cannot, then we should expect no more than the current two or three International Series games to be played on our shores, and that I am afraid will be it.