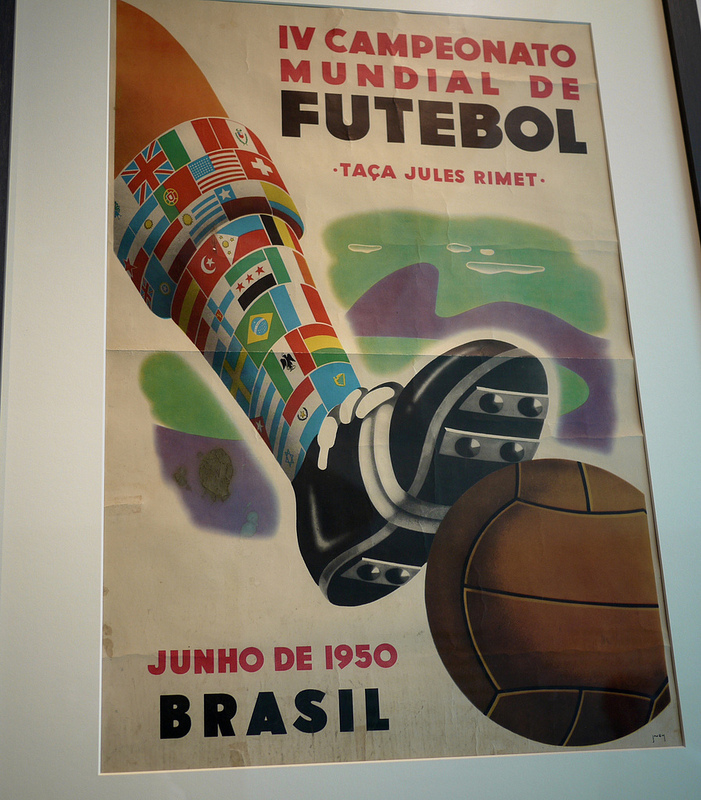 The World Cup’s only previous sojourn to Brazil is remembered in this country mainly for England’s debacle against the USA in the course of their first ever finals campaign. Yet the first post-war World Cup was remarkable in many ways, from the hectic qualification and distinctive format to the profound shock left by its outcome.

Although by 1950 no World Cup had taken place for twelve years – the trophy had spent much of the war hidden in a shoebox – Brazil had long been hosts-in-waiting. The Brazilians had in fact placed an optimistic bid to host the World Cup in 1942, but Hitler’s invasion of Poland ensured that the World Cup would not give his country’s national team another chance to humiliate itself after elimination by Switzerland in 1938 and defeat to Norway at the Berlin Olympics two years earlier. When FIFA convened in 1946 to decide the location of the next World Cup, Brazil was the only country to bid, and­ ordered that the tournament be postponed from 1949 to 1950.

On the same day, Switzerland was elected unopposed as host for 1954. If that is a little hard to imagine today, what seems inconceivable is the immense difficulty which FIFA had in assembling enough teams to make a tournament. With Brazil qualifying automatically along with champions Italy, FIFA made fourteen places available for qualifiers, of which seven would be European, six American and one Asian.

So much for the theory. Of thirty-two teams who entered, only nineteen played a single qualifier. The British teams, who had sidestepped the pre-war tournaments, all entered for the first time, with the top two teams in the 1949/50 Home International Championship slated for Brazil. Scotland, however, grandly declared that they would travel only as group winners, and when Chelsea’s Roy Bentley scored the winner against the Scots to give England victory in the group, the SFA kept its word and Scotland, incredibly, withdrew.

Yugoslavia, Switzerland, Sweden and Spain all qualified, but with Turkey joining Scotland in forfeiting a place, two European places had still to be filled. France were handed one berth but Portugal turned down a similar offer. Try as FIFA might, they could not find another European side able or willing to participate. Across the Atlantic, Argentina, Uruguay and Paraguay were unopposed, while Mexico and the United States both progressed by dispensing with Cuba in a three-team group held entirely in Mexico City. India found their passage to Brazil vacant as every other Asian side withdrew.

That left fifteen teams in the draw, which was carried out just weeks before kick-off. But even with fixtures scheduled FIFA could not keep teams tied down, as both France and India withdrew at the last moment, the latter – according to legend – because FIFA refused to let them play barefoot. With no time to re-draw, the World Cup opened with a decidedly lopsided appearance, featuring two groups of four, one of three and one of just two, Uruguay and Bolivia. Of fourteen qualifying teams, only eleven could be persuaded to line up alongside Brazil and Italy. In contrast, 207 teams entered qualification for 2014, competing for 31 places alongside the hosts.

Never content to leave the format unchanged, FIFA achieved a unique feat in 1950 by arranging a World Cup without a final, favouring a deciding round-robin contested by the ‘group’ winners. Yet despite all this chaos there was undeniable relief when the World Cup finally resumed on 24 June, as Brazil defeated Mexico. Most expected Brazil to win the tournament, although they found themselves in danger of a humiliating exit as a late Swiss equaliser cost them a point in their second game, allowing Yugoslavia to go top. The hosts however rallied to beat the Yugoslavs 2–0 at a relieved Maracana in their final game and reach the deciding group.

Walter Winterbottom’s England was also expected to ease through and began comfortably enough with a 2–0 victory over Chile. That same day the USA came close to a famous victory over Spain, leading for 64 minutes before conceding three near the end. The Americans however completed the job in the following match in Belo Horizonte, one of the most infamous games in England’s World Cup history: a scruffy goal from Joe Gaetjens (who won just three caps for the USA, plus one for Haiti) was enough to beat an England side featuring Stanley Matthews, Tom Finney and future manager Alf Ramsey.

England could still have qualified – the US returned to usual form with a 5–2 reverse against Chile – but instead suffered a second consecutive 1–0 defeat, this time to Spain, sending the World Cup’s only newcomers packing. In the third group, Italy were beaten by Sweden, their first ever defeat at a World Cup finals. A point for the Swedes against Paraguay secured them a place in the final group, while Uruguay, placed in a two-team ‘group’, joined Brazil, Sweden and Spain in the deciding round by pummelling Bolivia 8–0.

Uruguay though could only draw their first game in the deciding group, coming from behind to earn a point against Spain. On the same day four goals from Ademir, one of them a breath-taking bicycle kick, helped the hosts put seven past Sweden. Four days later Brazil scored another six to thrash Spain, while Sweden recovered to lead Uruguay 2–1 with quarter of an hour left. That would have made Brazil’s position almost impregnable, needing just a draw against Uruguay with even defeat leading merely to a playoff against the recently demolished Swedes. Ominously for Brazil, however, Uruguay staged a late comeback, as Oscar Miguez equalised before exploiting an error by goalkeeper Svensson to score the winner. The result meant that the winner of Brazil v Uruguay at the Maracana would lift the Cup. A draw would do for Brazil, but in essence the World Cup would have a final after all.

Brazil lined up for the game in their traditional kit – white shirts and blue collars, worn since their international debut in 1914. Watched by English referee George Reader, the hosts dominated as expected and scored soon after half time through Friaca, like Gaetjens timing his only international goal to perfection. Yet once again Uruguay would not buckle, and Schiaffino converted Gigghia’s cross on 66 minutes to restore parity. Then the provider of Uruguay’s first goal sent more than 200,000 spectators into horrified silence by beating Barbosa at his near post with eleven minutes remaining, to give Uruguay their second title.

Brazil’s defeat ranks among the all-time great international upsets: the hosts were in fact so traumatised that they abandoned their trademark kit in favour of the now iconic yellow and green of their national flag. England too had learnt lessons. It would take the 6–3 stuffing by Hungary in 1953 to prove the point, but the 1950 fiasco first opened England’s eyes to the fact it was no longer a first-rank footballing power. Nonetheless the tournament, for all its frailties, had re-established the still embryonic World Cup. By 1954 the newly divided Germany had resumed internationals and the brilliant Hungarians were at their peak. With domestic leagues resuming everywhere and the World Cup restored, football had made it out of the war alive.