Luis Suárez – The clown of the media circus? 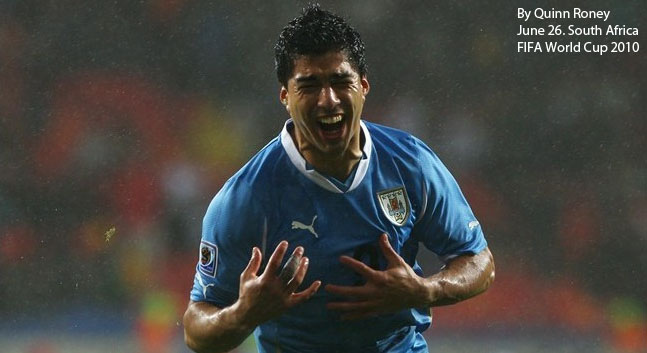 You’d have been forgiven for thinking that any football was actually played at Old Trafford last weekend.

Even with Manchester United keeping the pressure on their noisy neighbours by beating one of their fiercest rivals, even with Wayne Rooney finding his scoring boots again, there was only ever going to be one back page on the Sunday papers: ‘handshake-gate’. In refusing to shake Patrice Evra’s hand during the pre-match formalities, Luis Suárez has ensured that the racism-in-football debate rumbles on and on, and that his own reputation now lies in tatters. Suárez has been no stranger to controversy in recent years. His handball off the line for Uruguay in the 2010 World Cup, resulted in his sending off but meant that Uruguay progressed to a world cup semi final in the place of the people’s favourites Ghana. Previously to this he had been involved in a rather unsavoury biting incident in the Dutch Eredivisie on a PSV player, and as if to confirm this reputation In the UK, Suárez has also received FA charges after some allegedly provocative gestures to Fulham fans. However, the incident with Evra in October has received the most intense media scrutiny – the ins and outs of which have been thoroughly well-documented in recent months. And so onto Saturday’s development.

Much had been made about the Suárez-Evra confrontation before the game, but I doubt that anybody seriously suspected what was to come. Despite agreeing before the game to shake Evra’s hand, Suárez, with a nonchalant lift of his arm, chose not to accept the United player’s hand. Acrimony, always a given in Liverpool-United encounters, threatened to spill over before a ball had even been kicked, as Evra had to be restrained from squaring up to the Uruguayan. Whilst Evra’s over-zealous celebrations at the end of the game (which coincidentally happened to be right next to Suárez) hardly crowned him in glory, it appears a more understandable reaction than Suárez’s spurning of the cordiality of a handshake before the inevitable hostilities of a football game. Not only was it a choice which has incensed many opposing supporters and managers – Ferguson labelled him a “disgrace to Liverpool Football Club” that “should not be allowed to play for [Liverpool] again” – but has also shown incredible disloyalty to his own manager and team.

Liverpool’s players and Dalglish himself have received much criticism for their continued support for their striker, stemming from the infamous Luis Suárez T-shirts worn during their warm-up at the DW Stadium against Wigan. Dalglish also risked incurring the FA’s wrath by claiming in the wake of the draw with Tottenham on Monday, Suárez’s return to Premier League action, that he “should never have been away” in the first place. For the faith that Liverpool have shown in their £20million striker, Suárez, in pulling such a petulant stunt shows them that their unflinching support was unfounded.

Even in the post-match interview, Dalglish maintained his stance, blaming the “24-hour news channel” which the match had become for his striker’s behaviour, exonerating him from any blame. In a spiky confrontation with a Sky reporter, the Liverpool manager angrily retorted “I think you are very severe and bang out of order to blame Luis Suárez for anything that happened here today”.

True, there is an increased media presence – and consequently pressure – around these sorts of cases at the present, with the John Terry/Anton Ferdinand debacle and the racist chants that a Liverpool fan hurled at Oldham’s Tom Adeyumi, but such an act as Suárez’s does nothing to quell this media frenzy. If anything, it prolongs and intensifies the media coverage, with social networking websites and newspapers alike exploding with indignation at the striker’s actions.

Both parties (Dalglish and Suárez himself), and the club themselves have since issued swift apologies for the events on Saturday, for which they should be highly commended, but by that point, the damage had been done. Even as far afield as the United States, the New York Times criticised the treatment of the affair, and urged Liverpool’s Boston-based owners, John Henry and Tom Werner of the Fenway Sports Group, to intervene and repair the club’s global image.

So, where do Liverpool and their owners go from here? Obviously, the apologies from player, manager and club were the first step, but there has now been potentially-irreparable damage done to both national and global views on the player himself and the club as a whole. Shipping Suárez off in the next transfer window, as many have suggested may happen, will hardly solve Liverpool’s problem in the long run. They can ill-afford to let go of one of their best players on what will inevitably be ‘the cheap’, given the vast amounts that they have spent in the last year or so. And also, bluntly put, Dalglish’s team looks a whole lot weaker without him in it.

The solution seems to me to be to take a leaf out of Manchester City’s book in their dealing of the Carlos Tevez affair, in letting the striker go back to South America for a couple of weeks. Out of the British media limelight, there will be less heat on him; he would be able to recover his thoughts before returning for the latter stages of the season refreshed and minus much of the media circus that has characterised the last four months of his Liverpool career.

A lot of Liverpool fans will argue that Suárez needs to, and deserves, to be thrown back into the limelight as soon as possible – but as his temperament thus far has established, this may not be the greatest solution. Taking him out of the media spotlight looks to be the only thing with which Suárez can recover his calm and his dignity. King Kenny, the Anfield faithful, and Liverpool Football Club can only do so much for their prized asset; the rest he has to do himself.