Koeman’s Everton project unravelling – what next? 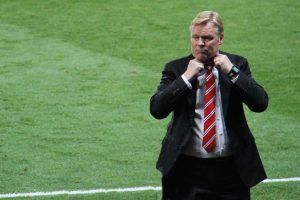 After investing just under £160 million in the summer transfer window, Everton find themselves lost in the deep depths of wilderness, hovering just above the relegation zone. They are struggling for goals, confused at the back and simply lacklustre in all departments. What has happened at Goodison Park?

The mass spending over the summer gave a clear signal of intent from the higher-ups in the club that Everton were now firmly set to join what has become the ‘Top Six’ of the Premier League. There emerged a wave of optimism for the club’s fortunes among media and fans alike, with the Goodison Park faithful dreaming of battling for Champions League qualification and the club being put back up the league to where it’s rich history belongs. These feelings of optimism from within the club, from the media, and from fans naturally meant that there was immense pressure hanging over both the squad and the manager Ronald Koeman.

Based on Everton’s current league position – 16th place with eight points after eight games, and an abysmal start to the Europa League campaign – a 3-0 thrashing away at Atalanta where the Toffees were completely outclassed, and a 2-2 draw with Appolon Limassol (who came third in the Cyprian League last season), Koeman has failed to live up to expectations for the season and now finds his job under pressure. Is there anything that Koeman can do to change the club’s fortunes, or is it time for him to go?

The way to address whether Koeman should be sacked or not is to examine the problems at the club and whether he can influence a change in these. Poor performances from the team are the main issue, and I believe this is Koeman’s fault and it seems like he will not bring about the necessary actions to turn around Everton’s poor form.

Everton’s side at the moment lacks both pace and energy in attack and is defensively shaky at best. The lack of pace and energy is mainly down to Koeman’s insistence on playing the 4-2-3-1 or 5-3-2 formations. In Koeman’s team, this relies on having two midfielders who break up the play. Both Idrissa Gana Gueye and Morgan Schneiderlin do a solid job when it comes to tackling and interceptions, but they are limited going forward and often play simple passes sideways or backwards, which slows down attacks and allows the opposition to regroup into their defensive shape. With this regrouping taking place it is necessary to attack with pace and energy to create problems and situations that a well-drilled back-line cannot simply anticipate.

Everton however lack pace in Koeman’s preferred starting line-up, with players such as Gylfi Sigurdsson, Wayne Rooney, and Dominc Calvert-Lewin not possessing the sort of speed which scares an opposition back line. Koeman often goes with one winger to take up the last attacking spot, whether it be Nikola Vlasic or Kevin Mirallas, but they often find that they have to look to play backwards and not into the channels as the other members of the attacking quadrant prefer the ball into feet. The problem with having similar players like Sigurdsson and Rooney in the line-up is that teams know what is coming – the ball will be passed around the edge of the area at no real speed and there will always be time to reset into a basic defensive shape.

Part of the reason Manchester City are so free scoring at the moment is the raw pace of players like Raheem Sterling, Leroy Sane and Gabriel Jesus, meaning that an opposition defence never has the time to think and reset and so gaps to play into naturally appear. Koeman’s stubborn refusal to play with two pacey wide men, and in particular his under-usage of the rapid, exciting, prospect Ademola Lookman means that the Everton attack is one-dimensional and so clear-cut chances are at a premium. It has been clear since the first game of the season that Everton are very easy to read in attacking play, and the reason that Koeman is to blame for this  is that he refuses to give exciting players like Lookman a go, and so Everton’s attack suffers.

Everton’s defence has also alarmingly dropped in form this season. After big spending on Jordan Pickford and Michael Keane, one would expect Everton’s defence to be far more impressive than being the equal 4th worst (which it currently is) in the league. There is a lack of basic organisation at times and Koeman certainly did not address the problem caused by Seamus Coleman’s horrific injury earlier in the year. Koeman has rotated between Mason Holgate and Cuco Martina in the right back position. Holgate is a young man with a lot to learn who is a natural centre-back from his youth team days, while the fact that Koeman did not consistently start Martina at Southampton surely suggests that he was not good enough for a team that was aiming to break into regular European Competition.

It may be hard to blame Koeman for individual errors, but the fact that every match there is a constant threat of conceding due to a shaky defence means that surely he must find a way to sort this out on the training ground, and yet it seems that this is not happening. Koeman seems to refuse to change and adapt his personal plan for how the team should play, and so over and over again this season, Everton have struggled in the attack and always looked liable to conceding. This has resulted in Everton being winless in their past 12 Premier League away games – their longest run for 15 years.

There is also a clear attitude problem at the club, with a negative mindset instilled into the side when battling against the top teams. It appears that three points is simply a bonus for the side when travelling away, with a respectable draw enough to please. There is little desire to challenge the big boys. For example, they have never won at the Emirates in the league, haven’t picked up three points at Stamford Bridge since 1994/95, and have failed to beat Liverpool at Anfield since the 1999/2000 season. The team gains motivation from the manager, and as Koeman hasn’t addressed this historical psychological problem against the ‘bigger’ sides, Everton’s stagnation looks set to continue. Nevertheless, at this point in time, Koeman will be hopeful that his side can address their psychological woes against any team.

If Koeman does not address obvious problems in the team’s performances and get back to basics on the training ground, on top of the obvious psychological problem in the team (two things which he does have control over), then it may be time for a change to save Everton’s season.