James Haskell – the end of the road? 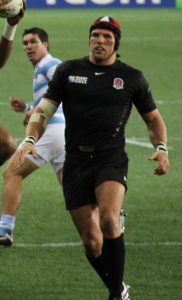 As England beat a poor Argentina side in underwhelming fashion last Saturday, they entered the game without one of England rugby’s most prominent figures – James Haskell – who has suffered from the frightening strength in depth that England currently possess.

Tom Curry has headed back to Sale for a lengthy layoff after sustaining a wrist injury that will keep him out for twelve weeks. His replacement was the abrasive Sam Underhill (Bath) who had a fine game against the Pumas, while the dynamic Sam Simmonds (Exeter) made his debut off the bench on Saturday, having arguably been the Premiership’s most exciting player to watch this season. The emerging Zach Mercer looks a promising talent in reserve in the back row ahead of the 2019 Rugby World Cup in Japan.

Haskell has arguably played some of the best rugby of his life in the last two years, since the appointment of Eddie Jones. He flourished when England were crying out for aggression in the back row after the abysmal showing of the 2015 World Cup Campaign.

But England now have that fierce pack and are now looking for that genuine openside, especially if Jones continues the deployment of Maro Itoje on the blindside to accommodate his three other world class locks – Courtney Lawes, George Kruis and Joe Launchbury. Haskell is not the flanker for whom Jones is looking.

Whilst perhaps unfortunate, given the current strength of English rugby, most would agree that his exclusion was by no means unfair. The simple truth is that the Wasps man has not been playing well enough to merit continued selection in a side that poses a real threat to the All Blacks ahead of the 2019 Rugby World Cup in Japan.

Haskell has not been at the top of his game on the international stage since the summer of 2016 and his stellar performances in the 3-0 whitewash of the Wallabies. His 2017 Six Nations was affected by a foot injury and his performances in a Lions shirt were underwhelming at best in the second-string midweek team.

Whilst Haskell looked blunt and laborious in the harshest of rugby environments, his England rivals managed to cement their place going forward against a poor Argentina side.

Nathan Hughes stood up as powerful ball carrier, whilst Chris Robshaw underlined his calm leadership abilities in the Hartley era and his value to the side. After a frustrating year, a tour to South America might have done Haskell’s England prospects a world of good.

George Ford relished his opportunity to lead the back line in South America and his goal kicking was immaculate seizing chance to be England’s main man in Owen Farrell’s absence. The Leicester fly-half now seems undroppable in an England shirt, where his value in the team was in serious doubt, given the exciting options outside him who are all pushing for a starting berth.

Instead, Haskell found himself as Billy Vunipola’s replacement down under and played a minimal role on the tour – other than some well-executed humour directed at his roommate Sean O’Brien – and now finds himself frozen out of Eddie Jones’s plans this season.

Touring New Zealand as a British and Irish Lion is undoubtedly the pinnacle for a player from these shores, but was the late inclusion something of a poisoned chalice that signals the end of Haskell’s international career?

‘Test footie’ – as our antipodean cousins would say – is a cruel mistress. Just over a year ago, James Haskell seemed an integral part of England’s side ahead of the World Cup. He and Chris Robshaw were England’s erstwhile role models for the group, according to Eddie Jones. Jones maintains that ‘the door isn’t shut’, but at 32, it looks like a tough ask for Haskell to re-establish his name in the squad.

Furthermore, what is abundantly clear is that few are untouchable in this England squad. It is not to say that Jones has by any means made an example of Haskell, but it signifies that unless the elite crop of players remain at the top of their game, there are a number of players in each position waiting in the wings who can step in.

Henry Slade would currently walk into any Northern Hemisphere team, and deservedly started against the Pumas as a result of his impressive Premiership form this term, but finds himself behind a host of midfield options England have at full strength, namely Ford, Farrell, Joseph, Daly, Tuilagi and possibly Ben Te’o.

The case of Alex Goode is a similar one, who has consistently been the best fullback in the Premiership for a number of years. He finds himself frozen out of the setup because he doesn’t offer exactly what Eddie Jones is looking for at 15 in this exact moment in time and loses out to the inferior Mike Brown, who supposedly offers a more solid defensive option. On a side note, Brown thankfully appears to be in good health after his horrific fall under the challenge of Joaquin Tuculet.

England displayed an underwhelming performance in the opening Test of the month but Underhill and Hughes stood out in the back row, beside the dependable Robshaw. If England’s loose forwards continue to perform in the remaining tests against Australia and Samoa, Haskell may find himself permanently jettisoned, especially when contending with the rehabilitation of Billy Vunipola from injury.

If this is the end for Haskell, we should reflect on a mercurial England career, spanning 75 caps, two disastrous World Cups, and a triumphant Grand Slam in 2016. Given his popularity and prolific presence on social media, I’m convinced fans will continue to see plenty of Haskell, even if he no longer sports an England shirt.

James, it’s been a pleasure.