Is the search for humanity in football a lost cause? 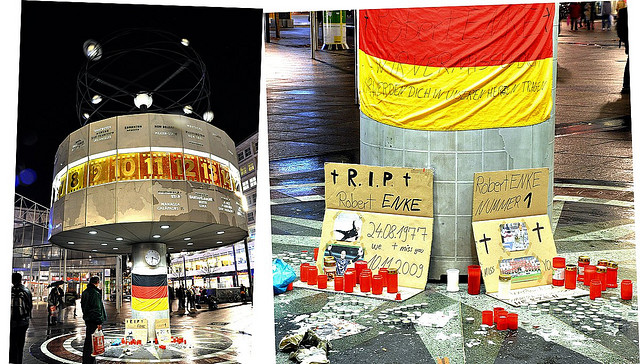 According to statistics roughly one in ten Britons experience depression throughout their lives. But is this reflected in the numbers who become professional footballers?

In a sport rooted in working-class tradition, there seems to be little room for the issue. Footballers are expected to be perfect professionals and mentally strong, but every once in a while we are reminded that they too can be just as vulnerable as everyone else. For Robert Enke and Gary Speed this is particularly relevant. At the memorial service held for Enke the head of the German Football Association, Theo Zwanziger, asked to break the existing taboos and stigmata to bring “a bit more humanity, a bit more moral courage, a bit more commitment to human dignity” into the world of football. Experts, professionals, the media and the fans commonly agree. If a successful and widely celebrated man like Enke is pushed to such drastic actions, then surely there is more that can be done to help and support these people from within football.

Two years on since the Enke incident and there is no evident change. The problem is more imminent in football than ever – it affects officials, players and referees working in the sport alike: Ralf Rangnick resigned from his managing position with Schalke due to burn-out syndrome, Gary Speed has taken his own life, and Babak Rafati, a referee, has narrowly escaped the same fate. It is difficult to understand, why rich and successful men are so mentally strained that they see suicide as the only solution. While other sports are affected as well, as two depression related deaths in the Canadian hockey scene have recently shown, football seems to be especially prone to mental illnesses. No other sport is as widely broadcast, and despite the huge financial rewards, the pressure on the individual is immense. The environment of football seems though to be far better at ignoring sensitive issues than addressing them. This is is demonstrated in the failure of the footballing world to accept gay players, and the modest fines given out to clubs whose fans give out racist abuse.

Naturally in such an environment it is very difficult to be a lone pioneer who comes out with depression, especially with the knowledge that those who tried, such as the German Sebastian Deisler, have struggled to continue their football career. A close friend of his confided that Enke had “these two great dreams: to play the World Cup and out himself as a depressive”. However they did not seem compatible, so he chose to pursue one of them – to play in South Africa – but eventually paid a very high price.

While it may seem inhumane not to nominate a player for a team, simply because he is depressed, it is obvious why managers prefer to sign both physically and mentally healthy athletes. The risks attached to ‘unhealthy’ players are deemed simply too high, with millions of Euros simply too much money to gamble on for most clubs.

The media can surely not go entirely without blame. Their coverage of this particular topic remains ambiguous. Footballers with depression and suicide cases are stories that sell, and the media will willingly discuss them in detail. Sympathy for the families of Enke and Speed is expressed and the call for a change and more humanity is echoed. Looking retrospectively at an interview that Enke gave to the football magazine 11 FREUNDE less than a year prior to his death, it is shocking how openly he spoke about his depression without anyone noticing. Instead the interviewer seems to try to dig even deeper.

As well as a certain level of ignorance, the media may also be a cause for possible depression as it becomes obvious when looking at the attempted suicide of referee Babak Rafati. He was highly unpopular with journalists. The Kicker magazine named him as the worst referee of the year and he was often subject to negative headlines. Referees, footballers and managers consistently take the full blame their decision making, and criticism is rarely constructive. A case in point is in post-match interviews, as the journalist will ask leading questions to losing managers about the performance of a referee, enticing a headline out of them.

So is all hope lost and do we live in a sporting world where money and prestige are given president over people?

The obvious conclusion seems to be yes, but personally I would hate to think so, and other sports do seem to be light-years ahead of football when it comes to dealing with mental health problems. When cricketer Marcus Trescothick came out with depression his position at his county club Somerset was never questioned. He continued to play, tasking the time off he needed for recovery, and even wining the Cricketer of the Year Award after e was diagnosed with his illness. If this is possible for cricket, maybe there is still some hope for football. The football community is notoriously difficult to change, as displayed by the decision not to embrace technologies, meaning that anything that is done will inevitably take time. Not everyone will have the same desire as Stan Collymore to come out to the public with their problems, but the anonymous support networks are definitely improving. Former footballer Tony Adams, who has set up the “Sporting Chance Clinic” for athletes who suffer from any form of mental illness or addiction, reports that after Gary Speed’s suicide there was an increase of players seeking counseling or treatment for depression. For Enke and Speed it might be too late and there will undoubtedly be high profile cases in the future, but maybe these cases can encourage others to take more immediate action. Above all we need to be patient. Nothing will change over night.

It seems that for attitudes to change everyone within the sport must reevaluate their own views, before blaming it on ‘the system’. If sympathy, awareness, humanity and attentiveness are what Theo Zwanziger asked for, then these things have to start with everybody else.