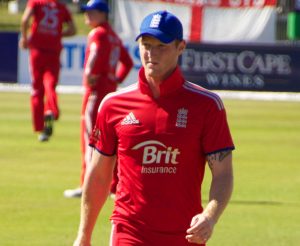 A man of the match performance from all-rounder Ben Stokes, which included a contribution of 103 runs with the bat, and match figures of 6-46 with the ball, led England to a thrilling 22-run victory in the first Test against Bangladesh in Chittagong.

The build-up to England’s first Test match of the winter was dominated by the fact that captain Alastair Cook would become the country’s most capped Test player of all time, surpassing previous record holder Alec Stewart with 134 appearances. A side note was that it was Bangladesh’s first Test match in 15 months, and given their recent strong performances in white-ball cricket, expectations were unusually high for a nation ranked a lowly 9th in the world.

Alongside Captain Cook’s 134th test appearance, came the debuts of four fresh faces in the Test arena – Ben Duckett of England, as well as Kamrul Rabbi, Mehedi Hasan Miraz, and Sabbir Rahman for the hosts. A surprise call-up for Gareth Batty meant that he played his first Test match for England since 2005.

At the start of day one, Cook’s first job was to win the toss, which he duly did and elected to bat – as is expected in sub-continental conditions. However, England were off to a more than shaky start. The debutant Miraz picked up the wickets of Duckett and Gary Ballance, either side of Cook’s dismissal at the hands of the experienced left-arm spinner Shakib Al Hasan. This left England wobbling at 21-3, before Joe Root came together with Moeen Ali to take England up to 83, only for Root to then be caught by Rahman from the bowling of Miraz.

Stokes, leaving his best performances to the later periods of the game, chipped in with just 18, before being bowled by Shakib. It was once again down to Jonny Bairstow – who claimed the record for most Test match runs in a calendar year by a wicket keeper – and Ali, to combine for a partnership of 88, before Ali fell for a hard fought 68. Despite leaving England in a stronger position, Ali departed with the side still at a below par score of 194.

Ali’s innings also included a bizarre period of play when he was given out by umpire Kumar Dharmasena three times in the space of six balls, only for the Decision Review System to save Ali on each occasion. This was in a match which saw a record 26 DRS referrals across the five days.

England were eventually bowled out for an average score of 293. The superb off-spin of 18-year-old Miraz – on debut remember – led him to remarkable figures of 6-80, as Shakib and Taijul Islam both contributed two wickets to the cause.

An England lead looked unlikely with Bangladesh at 119-2, with only Imrul Kayes and Mominul Haque departing, both to Moeen Ali, but the tourists kept plugging away at the host’s middle order.

The turning point of the innings came with the dismissals of Shakib, and captain Mushfiqur Rahim on the score of 221, with Stokes finding reverse swing towards the end of the innings. He finished with figures of 4-26 as Bangladesh ended on 248, with a lead of 45 for England.

Once again, England got off to a poor start, with the top five batsmen all being removed by the time the score had ticked on to just 62. Nevertheless, a masterclass in how to combine patience with positive stroke play saw Ben Stokes once again step up for his country, hitting 85 from 151 balls to leave England in a solid position.

Bairstow continued his unprecedented form with another valuable contribution of 47, which helped see England to 240. This set Bangladesh with a target of 286 runs to win, with plenty of time left in the game.

Neither side really seemed to take the initiative in the final innings, with the game remaining in the balance till the very end. One side looked to be coming out on top, before the other responded. England’s trio of spinners – Batty, Ali, and leg-spinner Adil Rashid – removed the top five of Bangladesh for 140 runs, which seemed to give England the advantage.

However, Mushfiqur and another shining debutant, Sabbir Rahman, came together to make England wait, and even turn the tide in Bangladesh’s favour.

Once again, the turning point of the innings was the dismissal of Mushfiqur, which came from an unplayable delivery from the veteran Batty, when he produced a lethal ball which pitched, turned and spat to claim the batsman’s glove, presenting a catch to Ballance at short-leg.

Rahman kept fighting despite two quick wickets from seamer Stuart Broad, and he took his side to within just 33 runs of victory, as bad light put a premature end to day 4.

With the possibility of the game going either way on that final morning, England’s hero Ben Stokes produced what was needed, as he found reverse swing like he did in the first innings to take the final two wickets, producing an enthralling win for England, with Rahman stranded on 64.

If Bangladesh had pulled off the win, it would have been their first against England in red-ball cricket since their formation as a Test side in 2000. But England arguably ran out deserved winners, thanks in large part to a sensational all-round performance from a distinctly more responsible and mature Ben Stokes.

Both sides will now turn their attention to the second and final Test in Dhaka, which begins on October 28th.

England still have questions persisting over their top order, with Duckett under-performing and Ballance struggling once again. Uncapped 19-year-old Haseeb Hameed and spinner Zafar Ansari could feature in Dhaka, particularly if the selectors decide rotation is key considering the looming five-match Test-series against India next month.

Bangladesh should take much heart from their performance. They have clearly grown as a side in these last few years, and they will give everything to prevent England taking the series win with them. It looks like they have found something special in off-spinner Miraz, and accompanied by the proven quality of Shakib, it is clear that England have not won this series yet.