Harry Kane: The best striker in the world? 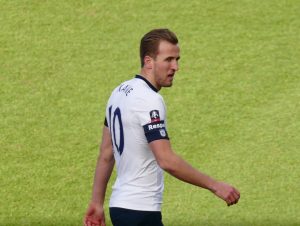 Across the Premier League this season there is an extensive range of incredible strikers, and it is almost a question of personal preference as to who you would rather have leading the line. There is the raw pace and power of Romelu Lukaku and the silky dribbling of Gabriel Jesus. I personally believe that Harry Kane is the best of the lot, possessing all of the attributes a team could want.

A striker’s main role in the team is to score goals. For Tottenham, Kane has scored 86 goals in 125 Premier League games (a 0.69 goals per game ratio) and for England the stats aren’t too bad either  – 12 goals in 23 games. Kane, at the age of 24, is only one goal away from Dennis Bergkamp’s total Premier League goals scored and it seems that Alan Shearer’s record of 260 goals is a realistic target for Kane in the years to come. Shearer even tweeted during Spurs vs Liverpool (where Kane scored twice and got an assist) – “He’s coming for me, he’s coming for meeeeeee, @HKane he’s coming for me! #260.”

Kane has an incredible work-ethic, demonstrated by his capacity to come back from injury stronger and his four-handicap at golf. If these stats don’t convince you of Kane’s scoring ability, his two consecutive Golden Boots are a further indicator of his unbelievable ability.

Kane has the all-round game to be a constant threat to an opposition defence. He has scored 11 headers, 55 league goals with his right foot, and 20 with his left. He is reliable from 12 yards, having scored 12 league penalties for Spurs so far. He is known for shooting on sight, and always aims low and to the side of the goal, engineering shots that are therefore difficult for goalkeepers to save. It can be argued that Kane shoots too much, resulting in a shooting accuracy that is not the highest in the league. However, the fact that he will always shoot when he can means that defenders always need to stick close and can’t allow him any space, which in turn allows players like Son Heung-Min and Dele Alli more space, resulting in Spurs often over-running defences and scoring for fun. Therefore, Kane’s constant shooting is actually a key part of Mauricio Pochettino’s attacking play, as it gives his other attackers the ability to express themselves. Kane’s 13 assists also show he can link up with his team-mates, though to be called the complete striker this is a number that must go up, and so when looking for weaknesses it is possible to cite assists as one.

Kane is actually fairy impressive at dribbling as well, which is mainly down to his strength. Wembley and White Hart Lane have become accustomed to seeing Kane in the channels, using strength to barge away a defender, all while keeping the ball under control. His first touch rarely fails him, allowing him to set and shoot quickly.  I recall Kane’s goal in the North London derby in 2016, where he received the ball in the left-hand channel, outmuscled Mertesacker, took a touch and curled the ball into the far corner, a goal which perfectly exemplifies how his shoot on sight habit is so deadly. In defence, Kane can be relied upon to press a back line and challenge an opposition trying to escape Spurs’ press-heavy style.

It is clear to see that Kane is an exceptional striker, and therefore the question is now what the future holds for him and how he can truly confirm himself as a name to be mentioned alongside the truly world-class players like Neymar and Cristiano Ronaldo. One of the things he must do is start to win trophies. Personally, he has 5 Player of the Month trophies and 1 Young Player of the Year award.

Spurs with Kane are yet to win a trophy and for the goalscorer to be up there with Lionel Messi, he must start to win trophies with the club, or even move on. In the last few months there have been links to Real Madrid, and I believe this move would make good sense for the Englishman. Tottenham seem to be serial bottlers, struggling with mentality when it gets to crunch time. It can be said that they are improving, climbing from 3rd in 2015/16 to 2nd in 2016/17. However, the cup game against West Ham this week (in which Kane didn’t play), saw Tottenham lose a 2-0 half time lead to a team struggling in all departments this season, to eventually lose the match 3-2. Alas, a chance to move into the quarter-finals of a cup competition was lost. If Kane is brave enough to move to a different league and to a club with a win-or -nothing mentality, he will have the chance to win the trophies that his career is lacking, and the chance to prove himself in another league (another thing that will help him when the discussion of best in the world is brought up). Success at the international level also matters, and so if Kane can take England far at Russia 2018, it will be difficult to doubt both his ability and his pedigree as a striker.

It seems that Kane will not stop scoring any time soon and if he can guide his teams to success or challenge himself personally, potentially away from Tottenham, he can be considered without doubt as one of the best players in the world.