Gatland’s Wales: On the path to World Cup glory? 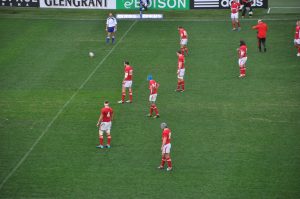 As the South African replacement back Lukhanyo Am was held up by the Welsh defence to bring an end to a hard-fought 24-22 victory over the Springboks on Saturday, a collective sigh of relief spread around the Millenium Stadium in Cardiff.

This stage in the four-year cycle heading towards the 2019 Rugby World Cup in Japan is not really about winning, but rather finding the combinations that will prosper in two years’ time.

And yet for Wales, it really was about winning.

With a dire record of just three wins in 34 tests before Saturday for Gatland’s Wales against the ‘big three’ of the Southern Hemisphere – South Africa, Australia and New Zealand – and defeats against the latter two already this Autumn, Saturday’s win quieted some outspoken critics.

Gatland has quite-rightly experimented in their four tests this autumn – with varying degrees of success – but beating the South Africans was arguably more important. Some have criticised Gatland’s side – arguing that their aging squad plays a predictable brand of rugby and that Scotland have overtaken them in the rugby hierarchy.

Readers of my previous article will be unsurprised to hear that I disagree with this perspective. The opening game of the 2018 Six Nations sees the Scots travel to Cardiff on 3rd February, which promises to be fascinating viewing and may go a long way in settling this debate.

Wales are in a good position two years out from Japan. They have experience and quality all over the field, with a functioning lineout and quality half-backs who control games.

Ken Owens is an outstanding hooker and led a wonderful Scarlets team to the 2017 Pro12 Title. Lock Alun Wyn Jones is not at the standard of his English counterparts – Maro Itoje, Courtney Lawes and Joe Launchbury – but he guides his pack with leadership, skill and ageless enthusiasm.

Wales possess an abundance of talent in the back row that other Northern Hemisphere teams can only envy. Taulupe Faletau was a stalwart for the British and Irish Lions in the summer; joined in New Zealand by Messrs Tipuric, Ross Moriarty and Captain Sam Warburton. Josh Navidi and his hair have looked every bit the part as an international openside and the Cardiff Blues man is set to challenge club-colleague Warburton for the number 7 jersey come February.

The return of Rhys Priestland to international rugby is refreshing and fully merited after consistently impressive performances in a Bath shirt. Priestland possesses a greater skillset than the dependable Dan Biggar and must be in contention for selection at stand-off going forward. I’m not advocating dropping Biggar – who has been talismanic for his country – but Priestland can get more out of the three-quarter line than Biggar when playing flat to the line on the front foot, and can inject greater pace and width in attack.

Jonathan Davies – winner of the BBC Wales Sports Personality of the Year 2017 – is a world-class footballer at 13 who will be sorely missed in the Six Nations due to a foot injury sustained against Australia.

Liam Williams should be starting at fullback, where he can exert greater influence on a game. He has too much quality and intelligence to be shunted out on the wing in order to accommodate Leigh Halfpenny, who for too long has relied on his goal kicking for international selection. It was at fullback that Williams stepped Kieran Read and Sonny Bill Williams before offloading in the tack to unleash Davies to create the extraordinary Sean O’Brien try in the First Lions Test in June. He is one of the primary exponents of the counterattack in world rugby and ought to be played in his best position.

It was encouraging to see Scarlets wing Steff Evans be given a run of games on the back of scintillating club form this season and last. Whilst he failed to display his best rugby this autumn, he exhibited encouraging flashes and offers creativity with ball in hand, unlike the lacklustre pair of George North and Alex Cuthbert – who have not performed in a Wales shirt since the World Cup two years ago.

Gloucester’s Owen Williams impressed as a second five-eighth against Australia and New Zealand and represents a shift in mentality for Welsh Rugby.

While many of Gatland’s decisions can often be puzzling to say the least, his decision to deploy a second playmaker at 12 (Williams plays fly half for Gloucester) is to his great credit. He has demonstrated that he is a flexible coach and has not dogmatically maintained his pejoratively-named ‘Warrenball’ philosophy – which relied on an arm wrestle up front and Leigh Halfpenny’s right boot.

Even though it appears Rhys Webb won’t be available for selection after his move to Toulon at the end of the season, Gareth Davies remains a quality option at scrum half. He demonstrated at the 2015 World Cup that Wales lose little quality in Webb’s absence.

Two years out from the World Cup, Wales are by no means the finished article, with a number of selection dilemmas for Gatland to contemplate and the continuation of their perennial defeats to Australia and New Zealand.

But with a potentially exciting backline and a dominant back row, Wales will continue to perform on the international stage and with two years to resolve any selection dilemmas and to form functional combinations, Welsh Rugby is in a good place.

In the quarter finals of the 2015 Rugby World Cup, I witnessed a brave and spirited Welsh performance in the flesh at Twickenham against a quality South African side. Wales came within minutes of reaching a second successive World Cup semi-final before a cruel Fourie du Preez try.

For a country with a population of just three million, this is a team that – unlike Ireland and England – has stepped up and fulfilled their potential when it counted and the collective experience of their quality group of players through two World Cups and two Lions tours gives them cause for great optimism at the half way point on the road to Japan.