Federer vs Nadal: The Endless Debate 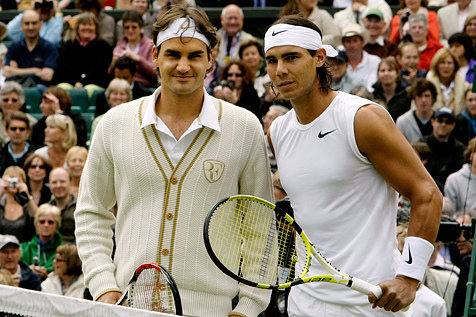 Two champions of the modern game – but who’s the greatest?

It is a subject which has enthralled tennis fans for the better part of the last decade, yet even with the apparent decline of Roger Federer from tennis’ Olympus of the Top 4, this subjective debate continues to entice pundits, professionals, and casual observers to offer their opinion on which, if either, of these competitors is worthy of inheriting the title of ‘the greatest’.

Nadal supporters, when engaged with this particular debate, are particularly vocal of his head to head record against Federer, with the current statistics showing a 21–10 advantage in favour of the Spaniard, who has won all three of their encounters in 2013. Nadal in fact holds a positive head to head record against all current members of the top hundred players in the world; in addition, he has completed not only the coveted career grand slam (winning all four major titles; the Australian Open, French Open, Wimbledon and the US Open), but experienced numerous victories representing Spain in the Davis Cup, the largest annual international team competition in the world, and holds the 2008 men’s singles Olympic gold medal. The current world number one also holds the record for the most majors won at a single event, with his French Open tally reaching an unprecedented eight this spring. These are all without doubt convincing statistics, however arguably the most impressive feat is his thirteen major titles at the age of twenty-seven. Following his current trajectory, he has a legitimate chance of overtaking the current record holder, Federer, with seventeen career wins.

The most distinctive aspect of Nadal from his closest rivals is his incredibly physical style of play; at the age of nineteen he broke through onto the tennis landscape with a French Open title at the first attempt, and since then has muscled his way onto just about every surface in tennis, though the red clay of Paris remains by far his most successful hunting ground. Nadal’s characteristic game style has always been to relentlessly chase down every ball possible, causing his opponents to misfire eventually due to frustration or sheer exhaustion. One only needs to look at his overwhelmingly positive record in five set matches to understand just how focused he can be after five hours of grinding down his unfortunate victim on the other side of the net. Federer himself has been the victim of this style of play, most notably at the 2009 Australian Open, when Nadal recovered from a five hour semi-final to outlast his great rival in an epic five set final which ended deep into the night. While Nadal has not been unchallenged in recent years – for example his seven match-losing streak to Novak Djokovic in 2011–12, which covered three consecutive major finals – he has always seemed to find a solution. In 2013, he took down Djokovic at the US Open, a tournament Nadal has historically found particularly challenging due to the strain of the fast, hard courts on his less than reliable knees. If the sheer volume of supporting arithmetic in Nadal’s corner wasn’t convincing enough, he has an extremely humble personality and inspirational work ethic, demonstrating a constant desire to improve his game, increase his variety of shot making, and avoid becoming one dimensional and static in his sport. The hunger, the enthusiasm, and the success of the last ten years of Nadal’s career truly show he is a multi-dimensional champion.

If there has ever been a multi-dimensional athlete however, many would agree with what Steinberger recently said: “The fact that Federer, in addition to all the winning, has been able to conjure such ethereal tennis while matching the firepower of his rivals and at a time when so many things – the rackets, the strings, the courts, the size, strength and speed of the players – conspire against the expression of beauty in tennis, is testament to his greatness.”

Before one even considers Federer’s records – a record seven Wimbledon titles, a record five US Open titles, a record four Australian Open titles, a record six World Championship titles, or a record 302 weeks atop the pedestal of the tennis rankings – it is worth pondering the five year age difference with Nadal, and how this has affected their head to head record. A Federer fan might also cite the fact that fifteen of their encounters have taken place on Nadal’s preferred surface of clay, compared to a meagre three on Federer’s hallowed ground at the All England Club, SW19. In fact it often comes as a surprise to tennis observers when they discover that, on the neutral surface of hard courts, Federer leads the current head to head record 7–6, giving him an advantage on two out of the three surfaces in tennis (hard, grass and clay). Nadal’s 2013 season will surely go down as one of his career best, with a 68–5 win record thus far, with two tournaments remaining on his worst surface. This only makes one appreciate some of Federer’s records during his prime years all the more; 2004: 74–6, 2005: 82–4, 2006: 92–5. Federer’s strength has always been in his consistency, however, and he has produced some otherworldly statistics over the last ten years. To take a handful; twenty-four overall major finals, two separate streaks of eight consecutive major finals, twenty-three consecutive grand slam semi-final appearances, thirty-six consecutive quarter finals, and at least three final appearances in each major. Indeed, Federer has emulated and exceeded Nadal’s career year in 2010, in terms of overall season record and grand slam victories, three separate times.

Jimmy Connors summarised Federer’s forehand as ‘the greatest our sport is ever likely to see, a great liquid whip’, and in terms of a varied game style remarked, ‘in an era of specialists you’re a grass court specialist, a clay court specialist or a hard court specialist. Or you’re Roger Federer.’ The remarkable public perception surrounding Federer and his vast array of unique strokes, aside from his eleven-year streak as ATP Tour’s fan favourite, was summarised in 2004, when, with only one major title to his name at the time, John McEnroe remarked, ‘This guy looks like the greatest ever’. Of course, the subjective and inconclusive debate for the true greatest player of all time cannot reach an end due to the changes in equipment, style of play, and work ethic that separates this century from the 1970s, 1950s, and 1920s. However, if such a category existed, both of these players’ names would have to enter the ballot.