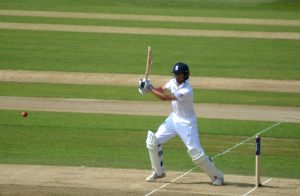 Well at least we’ll always have Rajkot. How life seemed that little bit brighter in the early days of November. Rajkot. Oh beautiful, beautiful Rajkot. Where England pushed India to the brink. Where England forgot to partake in the art of the collapse. Where Haseeb Hameed caught the eyes of every passing watch. Where Adil Rashid took more wickets than Ravichandran Ashwin and Ravindra Jadeja. Oh Rajkot, the good old days. Take me back. Please.

Alastair Cook looks calm. He always does. Whether he is lifting his helmet to celebrate a ton, or being besieged with an artillery fire of questions surrounding his captaincy, he is calm. He is however, exhausted. His side have not just lost a Test. They have been battered, bruised, and run firmly into the ground. The Chennai soil is the only thing they can taste. They have had to bear witness to a triple-hundred by a man batting in his third Test innings. India have racked up a first-innings total of 759. All England had to do was tough it out. Bat for a day, shake hands, get to the airport and smile and wave. That was it.

Three months in the subcontinent and the jet lag doesn’t seem to have gone. The exhaustion is in the shots. The weariness is seen with Jonny Bairstow, having just kept wicket for two days, skying the ball to mid-wicket. The fatigue is seen with Moeen Ali, having just bowled 41 overs, delivering a Jadeja delivery safely into the hands of Ashwin. It is a tired, tired England side. It is a side who should stay in bed, sip on some warm tomato soup, and waste their day watching episodes of Countdown. From 192-4, England finish their tour with a total of 207. They have fallen, fallen, and then fallen some more. They can shake hands and get to the airport. The smiles may be a little hard to come by.

It has been a tour of scrambled minds and confusion. The balance of the bowling attack was a topic of discussion that seemed to stir up a number of different answers, none proving effective. Regardless of this debate, England were consistently out-bowled by an Indian attack that not only possesses a world-class spin partnership in Ashwin and Jadeja, but a steady stream of valiant contributors in the shape of Mohammed Shami, and the new kid on the block, Jayant Yadav. While Virat Kohli has chopped and change with his line-up, those that have come in for the odd match have bowled with discipline, with England’s gung-ho batting playing right into their hands.

England’s bowling has lacked that discipline and the question over English spin stocks continues to loom. Adil Rashid picked up an impressive 23 wickets and still questions remains over his ability at this level. He is bound to not have the same consistency as that of a finger-spinner, but even so, his struggles with length mean that he may not be trusted to feature at the start of the home summer. It appears that the guidance of Saqlain Mushtaq was a key factor in Rashid’s more positive performances during the tour, which opens up questions as to why England do not use his services on a more permanent basis. If England expect to improve their performances on the subcontinent, surely they must pay the same level of attention to their spinners as they do to their seamers.

While England’s failings with the bat came in short doses of sheer madness, they have encountered some key discoveries. With the arrival of Keaton Jennings and Haseeb Hameed, it appears that England’s top order woes may have found some long-term solutions. Both showed the grit and determination that has been missed at the start of the batting line-up for some years now. While runs were not in short supply over the course of the series, where England’s batsmen fell short was in their approach. Does it truly make sense to play with the same attacking approach regardless of the match situation? Surely, at this level, there needs to be a recognition that batsmen must sometimes go against their natural instinct. Jos Buttler demonstrated that with his 6 not out in Chennai. Unfortunately, no-one else was willing to hang around with him.

With such humiliation, questions have now naturally turned towards the captaincy of Cook. While Cook’s captaincy may not have lost this series for England, it has not inspired to the heights as which it did in the tour to India four years ago. That was a fresh and determined Cook. While that determination has never waned, that energy does not seem to be at the level it once was. It has been a long and arduous winter. Perhaps he simply needs a break to put his feet up and reflect. He has come back from worse, and he may do so again.