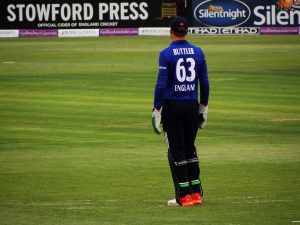 Perhaps it would’ve been a little too good to be true. As poor as the current state of Pakistani limited-overs cricket is, a 5-0 whitewash in any international series is not an achievement to be frowned at. Nevertheless, it was Pakistan who emerged as victors in the final match of the ODI series with England, a bittersweet moment of joy for them after two weeks of sub-par totals and shoddy fielding.

While questions now turn towards the tour to Bangladesh, this may serve as a time of reflection on how far England’s one-day fortunes have changed over the course of a year. Such has been the turnaround, that one could argue that they now stand as favourites for next year’s ICC Champions Trophy.

An indicator of how far England have come in a short span can perhaps be shown through the resemblance the current Pakistan side shares with the England of old. It wasn’t so long ago that a total of 300 was seen as a Herculean effort from an England side unable to come out of their shell. However, the class of 2016 has thrown away any sense of sensibility, as was demonstrated with the record score of 444 at Trent Bridge. The dot ball has become a pariah in the world of big bats and bulky batsmen, and this England side has no shortage of brute strength.

While Alex Hales has enjoyed a mixed summer in whites, him and Jason Roy have become a solid platform for the rest of the line-up to build upon. Joe Root continues to exhibit an aura of flawlessness at the crease. He is now competing with Virat Kohli and AB de Villiers for the title of the best multi-format batsman in international cricket. While he can exhibit the orthodox stroke play that is a regular feature of his Test performances, he also has the modern ability of upping gears to maneuver the ball around all parts of the ground.

While questions are constantly asked about Eoin Morgan after a run of failures, he continues to cut and reverse-sweep to substantial scores that silence any remaining doubters. In the aftermath of last year’s World Cup, he responded with strong performances against New Zealand and Australia. After another lean run this year, he managed to find some groove against Pakistan, with his 179 runs coming at an average of just under 60.

With the power and flair of Stokes and Buttler to follow, there is little wonder that scores over 350 have become part and parcel for this side. While Stokes is still to deliver a major score in coloured clothing, Buttler continues to demonstrate his superhuman qualities in the later overs. In the assault at Trent Bridge, he remained expressionless after clearing the ropes ball after ball. Hoisting the ball into the stands has simply become a part of his daily routine. His ability to swat the ball with such low hands means that to bowl at him at the death requires robotic precision.

The long line of all-rounders and natural ball-strikers continues down the order. A top-order batting collapse no longer breathes panic into the England dressing room. This was evident when Liam Plunkett smashed a last-ball six to tie the first ODI of the summer against Sri Lanka.

The bowling line-up does lack a world-class name. While England may not have a guaranteed match-winner in the mould of a Mitchell Starc or Sunil Narine, their attack has gained success through variation. They possess an array of seamers who all bring something different to the table. In Mark Wood and Liam Plunkett, they have outright pace that can exceed 90mph. In Chris Woakes, there is not only swing but a nagging line and length. David Willey provides a reliable left-arm option, and while Chris Jordan often struggles in his opening spell, he boasts an excellent yorker that makes him a serious threat in later overs.

Amidst the constant debate over England’s depleting spin stocks, Moeen Ali and Adil Rashid are proving to be canny operators, as they demonstrated during the 4th ODI at Headingley. Rashid constantly invited mistakes from the Pakistani batsmen with his flight, claiming key wickets in the middle-overs. While Ali has had his fair share of critics, he is certainly capable of performing a holding role in limited-overs cricket, with his career economy rate just below 5. When both were rested for the final match of the series, debutant Liam Dawson came in to record the most expensive bowling figures for an England ODI debutant. Dawson bravely offered flight and turn that rewarded him with two wickets, but the Pakistani batsmen feasted upon his leg-stump line. It served a reminder of Ali and Rashid’s qualities in home conditions.

It is not only the players that deserve praise. What represents a stark change in this side is the fearlessness in which they approach the game. Much credit must therefore be attributed to the selectors and coaching staff, entrusting players such as Hales and Roy to play with a risk-laden approach from ball one. No longer does there seem to be a string of indecision regarding selection that was so evident in the previous World Cup.

With the Champions Trophy a home affair, it is proving difficult to look past an England side that seems to have all bases covered. Whether or not they finally break England’s long-lasting duck in major ICC 50-over tournaments, they will be sure to provide some fireworks.