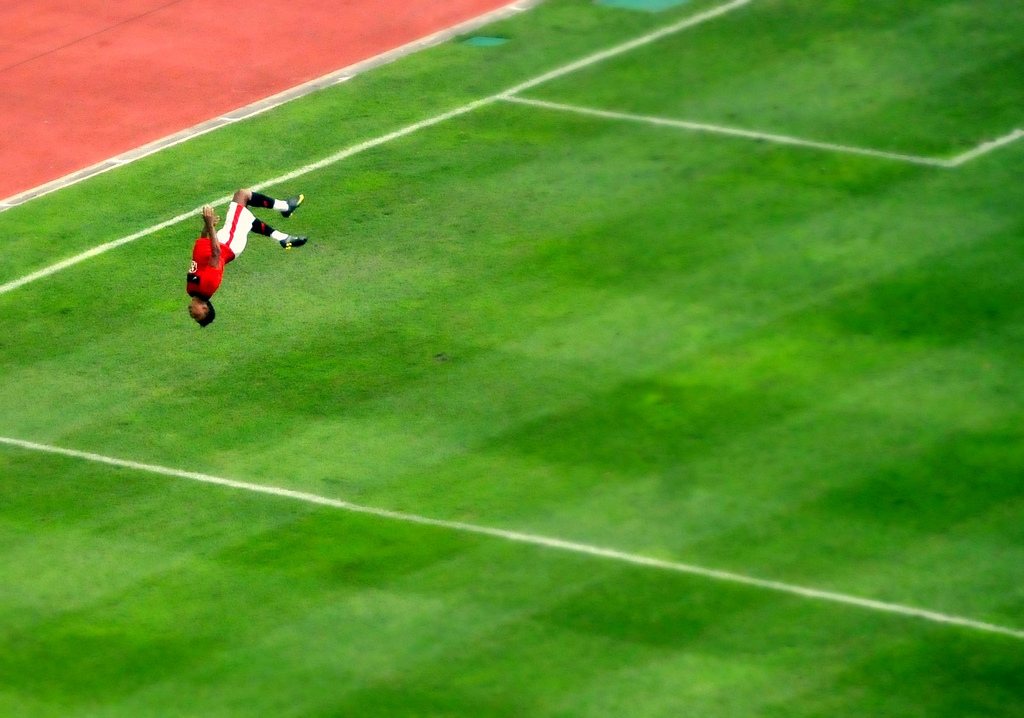 The Manchester United player Nani celebrates a goal with his trademark gymnastics.

The general trend in sport is against blatant displays of emotion. There are an ever-increasing number of rules prohibiting various forms of celebration in football. You now can’t take off your shirt or touch any part of a fan, let alone celebrate with them. While I accept nobody wants to see the pale, unkempt shrubbery that is Rooney’s torso, knowing a player cares is important, and if that’s how they want to show it then so be it.

Recently the West Ham striker Frederic Piquionne received a second yellow card and was sent off for walking into the jubilant fans after scoring what he thought was the winner in a vital league game.

This quashing of sporting passion is not only present in football. In the NFL, all the way across the water, referees penalise over-celebration, which includes everything from bringing on your own choir to serenade your walk back, to simply kneeling down. The former I can understand, the latter not so much. In the NBA they have started to give technical fouls (two of them in one game and you’re thrown out) for what they call, and you have say this in that American film announcer voice, “disrespecting the game”.

This is to dramatically misinterpret what “the game” is. Whilst I’m as prone to arbitrary worship of sporting idols as the next (slightly sad) person, this is taking it too far. There is no such thing as some sort of semi-deified ethereal “game”, let alone one that deserves such an assertive definitive article. We (humans) created these games we play with balls, and without us playing and watching there is no game. “Ah!” I hear you cry, “You are applying some sort of derivative of Descartes oft used and even more frequently over-used ‘I think therefore I am’, something like ‘I play sport therefore it is’”.

Well, I suppose you’re right, but you need to get a life. We created sport; there is no such thing “the game”. We do not need to respect it, we need to respect the other living lumps of muscle and fat involved that are loosely termed people.

We need players to respect referees, each other, and the fans. When a player displays emotion that is not directed at anyone in particular but is purely an expression of his own commitment to his sport, this can only be respectful to the game. Supporters spend their money and their time shouting, and it’s good to see that players share that appreciation, whether it be by shouting themselves or by reminding us that they have the body of one of the more athletic Greek gods. Or, as in Rooney’s case, one of their gardens.

This is the reason I actually have a particularly squishy soft spot for Andy Murray. He is not the most popular British sportsman. Ridiculously, he is probably less popular than Henman, despite the latter’s inability to do what he was being paid to do. When Murray is happy he shouts. When he’s distressed he shouts. When he wins he clearly loves it, and when he’s losing you can see his disappointment and frustration with himself in every part of his appearance and body language. I think this is exactly what a sportsman should be like. Naturally don’t let it get to the point where it hinders your ability to actually play the game, but by all means show you care.

Emotion is why we watch and play sport, whether it be simple enjoyment or full-blown euphoria as Johnny Wilkinson wins a world cup in extra time. We should not expect those whom we watch to be any more detached than we are.