Do we really care about the FA Cup? 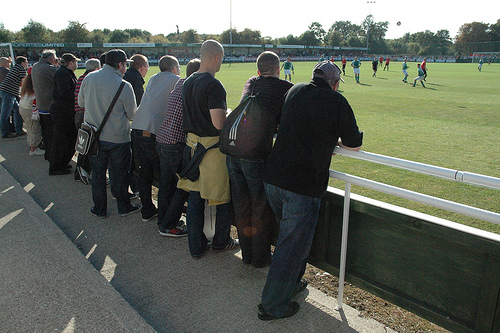 For many this is what the FA Cup values: small teams getting in the limelight

Many football fans would have scoffed had you told them that lowly Stevenage Borough could almost single-handedly rescue a waning FA Cup; but when Peter Winn slotted home past Tim Krul on the 8th of January, putting Stevenage deservedly into the pot for Round 4 of the FA Cup, many forgot that there were still 31 other teams left in the competition. Such was the magnitude of their win, I found myself eagerly anticipating the 4th round of the draw for the first time in years.

Being a Spurs fan, I have an almost instinctive love for the FA Cup, but in recent years the passion and vigour of playing in England’s premier cup competition appears to have been extinguished somewhat. What was displayed by the Hertfordshire team, in the bottom half of League 2, and 77 places below their illustrious counterparts, was therefore a proverbial breath of fresh air. With crunching tackles, fantastic goals and the sheer beauty of a Premiership team being outclassed by an overwhelming underdog, it is a result that will be remembered for a long time to come, and has done its bit to reintroduce the enchantment that has made the cup so special to the football fan.

Whilst there have been “cupsets” in recent years, with Premier League opposition being embarrassed by the likes of Barnsley (Chelsea and Liverpool) and Leeds United (Manchester United), the teams have always been under-strength and seemingly indifferent to the prospect of leaving the competition. With foreign players and foreign managers, who appear to not share in the rich legacy of the competition, it has almost entered into the blasé nature of the modern League Cup. However, Newcastle were effectively at full-strength, (minus Andy Carroll, who was injured anyway), with the midfield of Joey Barton, Kevin Nolan, Wayne Routledge and Alan Smith looking particularly formidable (and English). It was obvious that Newcastle were gunning for the win, judging from both their selection and their attacking mentality, which simply adds to the general buzz and air of triumph that surrounded Broadhall Way – very rarely have I seen an atmosphere as overtly electric as in the small 3,000-seater stadium.

The enchantment that in the FA Cup, “anything can happen”, has been very much dispelled over the last few years, with small percentages of the “big” teams monopolising the competition (in the previous fifteen seasons, there have only been five different winners). Exciting finals have been a thing of the Stanley Matthews 1953-era; I fail to remember a final which has lived up to its massive billing, with even the potentially-all-to-play-for Portsmouth vs. Cardiff City final of three seasons ago being a passionless, underwhelming affair. Even Pompey’s titanic effort to make the final last season amid such trying financial circumstances was undermined by a meek and submissive loss in the final to Chelsea, who themselves seemed content to play the game out in an uneventful 1–0 win. Whilst I am not suggesting that Stevenage will make the fifth-round, let alone the final, it will have ignited a spark into the competition that will give the players, be them Premier League or League 2, that extra bite in a challenge or an extra sense of belief that has been otherwise lacking.

Manager Graham Westley apparently ordered his players to “win 5–0” in his half-time team talk, which makes a hugely refreshing change from the usual “park the bus” mentality that seems to filter into lower clubs’ minds upon taking the lead. An attacking force from the outset, the eventual scoreline could have been much, much more. Handed another home tie in Round 4 to further illustrious opponents Reading, it will be interesting to see how far the fairy-tale will last. If the performance against Newcastle is anything to go by, we could be hearing a lot more from Graham Westley’s men in the coming weeks. You can guarantee that whatever the outcome, the atmosphere at Broadhall Way will maintain the same buzz that evidently spurred on the players against Newcastle.

However, it is not simply Stevenage that lit up Round 3; Burton Albion produced a fine last-five-minute comeback against Middlesbrough to win 2–1, Notts County of League 1 produced a monumental display to shock Premiership Sunderland at the Stadium of Light 2–1, and whilst the likes of Non-League Dover and York came a-cropper to higher-league opposition, it was not for the want of trying. In all, there were 112 goals in 32 games (not including replays), so there was definitely a fair share of entertainment on offer, and I for one cannot wait for the endeavours of Round 4. So thank you Graham Westley and Stevenage, for lighting up a competition that was fading fast in the minds of the footballing world, and restoring it to where it belongs: a plethora of teamwork, fantastic entertainment and giant-killings, and back into the hearts of the nation.