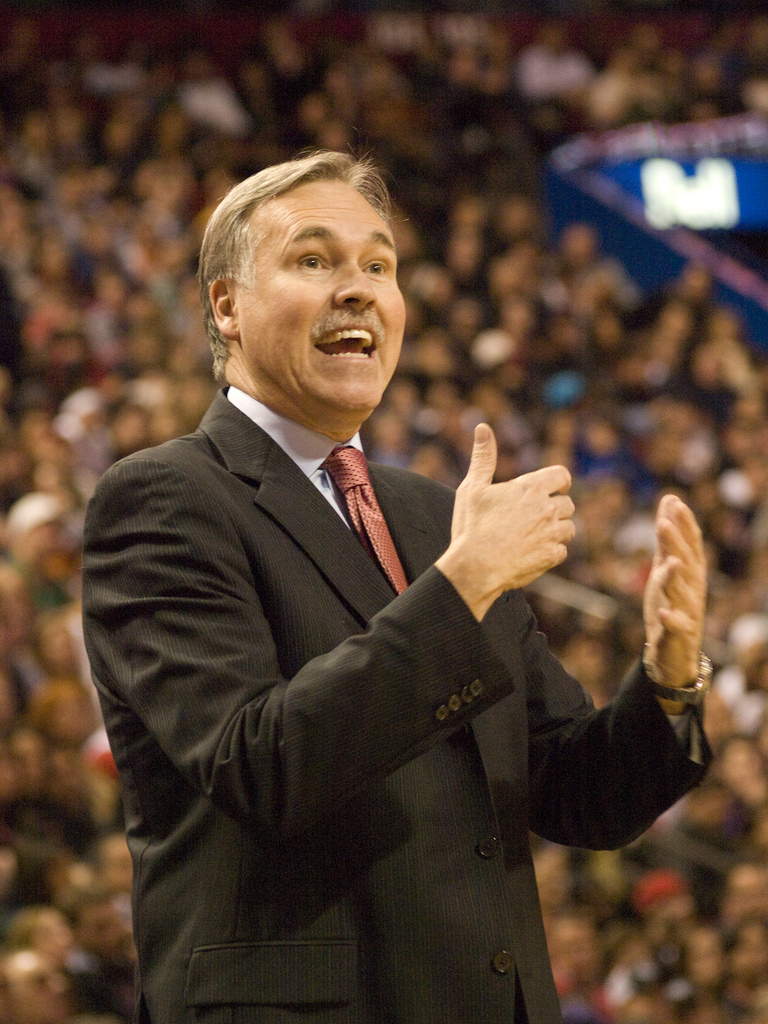 Mike D’Antoni (above) favoured in place of Phil Jackson much to the chagrin of Lakers fans.

It is clear that D’Antoni’s job is a colossal one. While the Lakers have had a minor resurgence in form, balancing their scorecard to 4–5 going into tonight’s game with the rising force that is the Harden-inspired Rockets, the numbers are pretty hollow. Ignore the fact that they had to wait for the Pistons to come to town to register their first win (a team that went on to lose its first 8 games before picking up its own first W) and you can only add wins against the Kings, Warriors and most recently, the Suns. Then take stock of the fact that the mercurial form of the Mavs, Blazers and Jazz, who dished out 3 of their 5 losses, and you realise just how un-Lakerlike this season’s beginning has been. The unmentionable even happened in a loss to local rivals the Clippers, but the absence of Steve Nash and the Clippers own sensational form easily had far more to say about that nasty reversal.

If alarm bells hadn’t already rung by then the only excuse would be that Mike Brown refused to hear them. Steve Nash’s exit midway through their trip to Portland certainly hasn’t helped things but his meagre contribution up until that point had suggested that Brown had little clue how to use the king of the dime, blessed with some terrific pieces but conspiring to misuse them. D12’s ejection in the opener highlighted his lack of form and match fitness, given his usual prowess on the defensive end of the floor and yet, his production has been only slightly less than in his career year in Orlando, suggesting that they should be moving effortlessly through their offensive gears even if in reality they are stalling. Howard seems to be quickly oiling away any rust with 3 convincing double doubles in his last 3 outings but his initial defensive worries seemed to characterize the whole team’s play. Porous at best, non-existent at worst, the defence has finally improved to the tune of limiting opposing teams to below the century mark in points per 100 possessions over the last few games. Sadly, this is little to celebrate and probably not set to last, since San Antonio aside, the Suns, the Warriors and the Kings (minus their star piece DeMarcus Cousins), hardly represented teams who can expect post-season runs at all, let alone harbouring lofty ambitions of progressing to their conference finals or beyond. With Kobe’s offensive production off the charts, it’s a major issue to see a Lakers offense only just beginning to win games when their leading scorer’s PER is taking off and he leads the team in assists too despite a reputation for playing selfish ball. Steve Nash’s return, regardless of how he is primed to fit in with this team, cannot come quickly enough. Guards Blake, Morris and Duhon are just not starters. In fact it’s hard to think of a single team in the league where they might hold down a starting role. Metta World Peace and Pau have even been adding their own solid numbers to the box score, which brings the root cause of their failures back to defence, and it’s temporary absence in Lakerland.

The offence is hardly predicted to suffer following D’Antoni’s introduction to the fold, even if it hardly seems as if Mike will hold the answers to their defensive troubles. Even his mere presence in the gym at his first training session since being named coach seemed to inspire the impressive production of their win over the Suns the next evening. Famed for his rapid, Seven seconds or less offence which demands players to pepper the basket early in the shot clock and encouraged 3 balls in great volume, D’Antoni’s critics have always pointed to defensive weakness as the reason why his Nash-led team never progressed past the Western conference finals despite all it’s collective talent. Even in L.A.’s convincing win on Friday, the omens were there since they still conceded 102 to a Phoenix team currently at 5–6 for the season and ranked equal 13th in the league in points per game. When you think of the success of Miami’s smothering defence in this year’s NBA finals, and the way that complemented their ferocious offensive play it is hard to see the Lakers having the tools to beat the Heat without getting the job done both defending and attacking the basket. Howard and Metta World Peace certainly have the capacity to influence games in a big way when defending their hoop, but Bryant and Nash have hardly ever been lauded for their defensive skills and Pau Gasol is also far more comfortable with the ball in his hands.

If D’Antoni and the Lake Project are to be taken seriously they are going to need to show the kind of hustle and defensive discipline that has characterised the spectacular early season form of the Grizzlies and the Knicks. Miami themselves have looked fallible recently with a handful of losses, albeit to title contending teams and away from their South Beach home, but this has had nothing to do with their offensive ability which is as scorching as it was the day that Mike Miller dropped seven treys to help clinch their championship win in some style in June. While there is little doubt that with a healthy Steve Nash, and a roster of elite players buying into their new philosophy, that the Lakers can deliver 110–115 points per night as promised by their new coach, the real question is whether they could expect to stop a rampaging LeBron James or Kevin Durant from laying 30 points on them when it really matters in the playoffs. While the Lakers are in turmoil right now I find it hard to believe that a team staffed with so much talent will not be able to find a solution to this issue, regardless of D’Antoni’s much malgined record. The idea that Dwight is still easing into the season and yet can post 5 blocks against a rampant Clippers side whose red hot offence has been unstoppable so far emphasises that this team can get things together on the defensive end. However, he will need all the help he can get. Pau, Kobe, Metta World Peace and the bench mob are going to have to tighten up on D if they really want that championship ring. It is time to stop panicking and start the hard work – if this side truly want to make history then it is in their capable hands but they will have to sweat their way to the top. Where better than to start against the Rockets tonight before the stern test of the red hot Grizzlies will emerge as a true barometer of their improvement early next week.