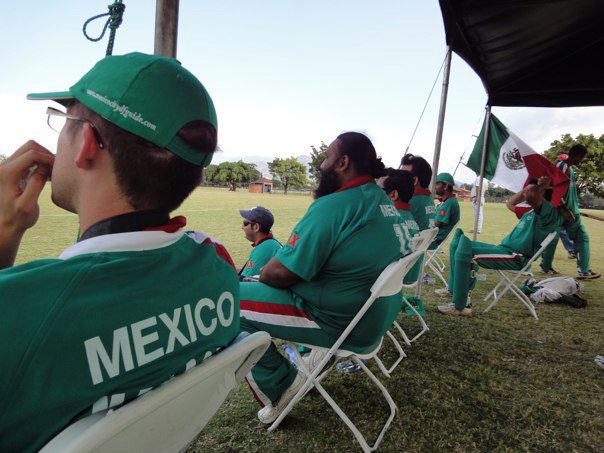 I’d never played much cricket in the UK before but when some British lads that I met on the bus one day invited me to turn out for them on a Sunday I thought to myself, “why not?” Since then I have been playing every other week in the second division for Corinthians Cricket Club; an interesting mix of high school students aged fifteen up to veterans of seventy plus. I coach junior cricket three times a week, work as secretary on the national association committee and also manage the national side at official ICC events, really quite an honour!

Cricket has apparently been played in Mexico since the 1820’s, introduced to the country by Cornish miners to the city of Pachuca in 1821 after Mexican independence. As if to prove this, at the end of my street there’s a rather tasty Cornish pasty stall! While expatriates still dominate the sport in Mexico today with players from the UK, India, Pakistan, Holland, South Africa and Australia, some things have changed dramatically since then. A rule book found recently in the Mexico City Reforma Athletic Club declares that, “The dress of uniform, shall be a flannel jacket, a straw hat, and white pantaloons”. Nothing but all whites will suffice today at the ground.

Passing through the 20th Century newspaper cuttings from the Mexican Herald, stories regarding the 1900 to 1902 seasons show that the league was composed of two teams in México City (RAC and MCC, both with their own grounds), Puebla, Orizaba and Pachuca. Today we have eight flourishing clubs in Mexico City who compete in first and second divisions with clubs also in Guadalajara (more famous for mariachis and Chicharito than cricket), Tequisquiapan a small town in Queretaro, and in the popular resort destination of Cancun.

Sadly during the revolution years of the 1920s and between the world wars we have no records of cricket being played in Mexico, probably due to many foreigners understandably leaving the country. However, in the late 1960’s the game was revived at the RAC´s new grounds in San Juan Totoltepec, just outside the Federal District of Mexico City. Many say that the Reforma Club has the best cricket ground in all of Latin America with a huge green space, nets to practice and of course a handsome pavilion complete with national and imported beer.

In April 2011 I had the fantastic opportunity to travel to Costa Rica as manager of the Mexico national team for an official ICC tournament. I had never imagined being a national team manager in my lifetime never mind by the age of 23. Having hit the dizzy heights of Collingwood ‘E’ football team, and never having played much Cricket back in the UK taking charge of a national team seemed like quite a step up, but the highlight of my career was still to come. The Sunderland Echo deemed the achievement sufficient enough to be part of the “Local Heroes” section, giving Mexican cricket some much deserved coverage in the North East. The banter in the pub is ongoing.

The job involved a little bit of coaching, a lot of paperwork and of course looking after the players. We arrived in Costa Rica as one of the pre tournament favourites but left with victories over only the Faroe Islands and Costa Rica, whilst falling to eventual winners Belize. Next stop will be Peru at the end of 2012, carrying the hope of more success.

So we have a wonderful ground and the basic infrastructure here within Mexico. But if you look at all of the the big cricketing countries, they were once British colonies which of course Mexico was not. Football dominates sporting life here and Chicharito can be seen adorned on the backs of the masses. Football is the national psychology, not cricket. In the fast moving pace of the city, people want fast moving sports and to spend a whole day to play one match is sometimes just not feasible. So what are we doing? We have changed to a twenty twenty format, and speaking more Spanish. The ground is now a more Mexican friendly environment and crucially we have been doing far more promotional work throughout the city to get more locals involved. New rules have been introduced to say that teams must play a minimum of two Mexicans per match and it’s really making a difference. We now have four young Mexicans who turn out regularly, one who looks to be a very promising bowler.

The new rules and initiatives would be nothing though without real grass roots programmes to attract young people into the game. We’ve realized that it’s not sustainable to rely upon a transient group of expats who come and go in cycles. Under the stewardship of chairman Jon Bonfiglio, cricket in Mexico is heading in the right direction. Cricket is played in several schools throughout Mexico City who compete in small sided tournaments and festivals, new investment is being made into basic cricket infrastructure and the sport is beginning to move away from expat circles. Another Durham graduate, Rob Stack, will also be starting a cricket project in Los Cabos in January 2012 which adds an extra dimension to cricket development in the country, giving more and more youngsters a taste of the “gentlemen’s game”.

There is of course a lot more to do. In the future we hope to send under 13 and under 17 teams away to official ICC competitions, open a league of ladies’ cricket and expand cricket coaching to the poorest communities.

It is very unlikely that Mexico will ever be world champions or will ever come close, but the very least we can do is to make this wonderful sport accessible to all. Hopefully this will be continued with some success next year in Peru at the ICC Americas Division 3 tournament.