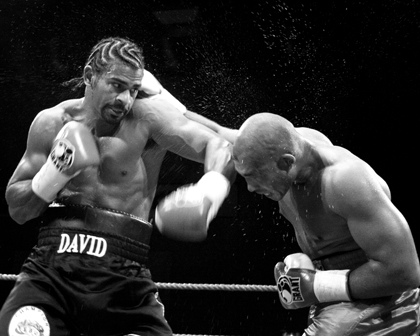 Recently David Haye destroyed friend-turned-foe Audley Harrison in just three rounds at the MEN Arena, Manchester. Though Haye won in convincing fashion it is still in doubt whether he is the man to rescue the Heavyweight Division from its years spent in the wilderness of Eastern European domination.

Haye has an abundance of confidence and swagger suggesting that perhaps he is capable of bringing back the glory days for the big boys of the boxing world but is he really capable of living up to the likes of Mohammed Ali? Perhaps it is unfair to compare anyone to the justifiable arrogance and poetic genius of Ali but in order to drag this weight division out of the doldrums surely there is no one better for Haye to aspire to. Ali is the pinnacle and Haye would do well to follow in his wondrous footsteps.

Of course Haye is far from achieving the legacy left by Ali but if what he is saying is true then his aim to unify the Heavyweight division and become a boxing great must be done within a year. His ambition to have successfully achieved this by the age of 31 is at least refreshing in a division that has for a decade been dominated by the ageing Ukrainian brothers Vitali and Wladimir Klitschko who hold the other World Heavyweight belts despite being well into their 30s. In an era of aged Heavyweights battling it out for the world titles Haye is seeking a rapid change of the guard before leaving the sport to pursue a career in the media spotlight.

Haye has alluded to following the likes of Vinnie Jones out of the professional sporting world and into films and television stating that if “Vinnie can do it then why can’t [he]?” I can’t help but feel that if Haye does indeed manage to unify the division within a year that he would be doing the sport that he loves an injustice if he were to turn his back on it having offered just a glimmer of light at the end of what has been a seemingly never ending tunnel for Heavyweight boxing. For a man with such talent and such power to throw away the opportunity of re-igniting what should be Boxing’s premier weight class with an extended stay at the top would without doubt be a huge disappointment to fans of the sport.

Haye has the talent, presence and self-belief of an Undisputed Heavyweight Champion of the World and the poster boy of British Sport and World Boxing but is he asking too much of himself? Can he honestly leave a lasting impression on the world of Boxing within a year as he so wishes? A lot of questions will remain unanswered about just how good Haye is if he leaves the sport having won the titles but not having defended them.

The Heavyweight Division has been lacking any flair or personality for what seems like an eternity and global viewing figures have dramatically leaned towards the lighter and more fast paced weight divisions in recent years. Without the “Hayemaker” the future looks bleak and Heavyweight boxing seems doomed to a continued era of tired performers defending their belts against inferior opposition.