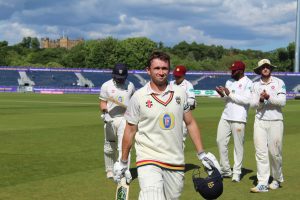 It is quite the understatement. On the 7th August, Cameron Steel walked off the Fischer County Ground in Leicester as the youngest double centurion in Durham County Cricket Club’s history. Just two weeks prior to scoring his record-breaking 224 against Leicestershire, he had extended his contract with the club to 2019.

Amidst the turmoil that Durham have endured over the last year – with the loss of key players, relegation, financial difficulties, and points deductions –  Steel has emerged as a shining star amongst the dark clouds circling Chester-le-Street. Having scored over 700 runs in Division Two of the County Championship, he has exceeded everyone’s expectations, even his own. ‘I probably didn’t expect it to go this well at the start of the season. My personal goals were to play a bit of first-team cricket really, let alone score any runs.’

It has been quite a turnaround in fortunes for a man who just a year earlier had been released from his previous club Middlesex. It came as a surprise for the California-born Steel, who had grown fond of his life in London. Bitterly disappointed, but not ready to give up on his dream of pursuing a successful cricketing career, he found himself trialling for Durham. ‘They gave me a trial straight away and it was just a godsend really.’ What many may not know is that Steel was really just coming back home.

It was as a Durham University student that Steel developed into the run-maker he is today, a participant in the famous MCCU programme. The scheme allows young budding cricketers to continue their sporting development alongside their education. Durham serves as one of six centres of the programme, alongside Oxford, Cambridge, Loughborough, Cardiff, and Leeds/Bradford. By choosing to study at Durham, Steel was allowed to balance his time in the nets of Maiden Castle with his other passion of History. More than anything however, the MCCU programme served as a great weight off of Steel’s shoulders. ‘I think more than anything, it helped me in these sense that it made me go to university really. Now I definitely feel that – having graduated and got a degree – there’s a lot of pressure off my back and in the back of my mind, if cricket doesn’t go well, I’ve got something to fall back on, which is nice.’

While Steel gained experience under a number of coaches in his three years at Durham, it was the presence of Graham “Foxy” Fowler in his first year, that seems to have had the most influence on Steel. The former England opener was not just an aid to Steel in terms of his technical expertise, but opened his eyes to all sides of the game, and the manner in which to go about life as a professional cricketer. ‘I think he was very good with his man management. He knew what made players tick and how to deal with players. I think he was perfect with me and always encouraged me to believe in myself a little bit more. Unfortunately, he was only coaching for one year – my first year – and only now have I really started believing in myself.’

While Fowler departed from his position as Durham MCCU’s coach during Steel’s time at university, the two have maintained a close relationship, aided by Steel’s relocation back to Durham. ‘I still speak to Foxy quite a lot, and go around for dinner to his house.’

It was Fowler who was the brainchild of the MCCU scheme, which despite it’s many success stories – recent England debutants Toby Roland-Jones and Tom Westley are products of the system – is under the threat of being closed down. Steel argues that this would be a grave error. ‘I think if there was more funding it might work better than it has over the last 4-5 years. I think it would be a great shame if it was taken away because I think it’s great that people can go and get a degree and develop their cricket while getting a degree. I know personally that it has helped my cricket to no end by having a degree. I think it would be a shame to take that opportunity away from others.’

With his degree in his back pocket, it is the commodity of runs that Steel is currently focussed on dealing with. To score a double-century was a thing of dreams for Steel, but he hasn’t been able to truly reflect on it just yet. ‘In all honesty it hasn’t even really hit me yet. This whole season hasn’t really hit me yet. I’ve kept doing the same things that I’ve been doing all year, just keeping the game simple and I haven’t really appreciated those landmarks as much as I would have expected just yet.’

What lies next for Steel? In a year in which he has gone beyond his own imagination, he is now aiming to reach the milestone of 1000 runs for the season. Do not be surprised if he goes well beyond that.