The Azzurri dilemma – what next for Italian football? 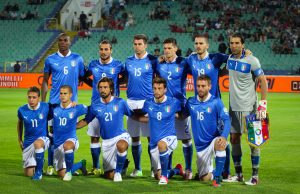 Every four years, the Fifa World Cup rolls around. With it comes a wave of optimism surrounding England’s chances of success, swiftly met with disappointment, an underdog who surprises everyone, winning the hearts of millions and Italy qualifying with ease. Despite this being the case for so many years, the Italian national team will not compete at the 2018 World Cup in Russia. So how did this happen? What are the repercussions of this failure? And what can we expect the response to be?

It all started by being drawn in the same qualifying group as Spain. With only the top team from each group advancing automatically, the Italians knew that they would have to better their Spanish counterparts’ record. The two teams met in the second qualifying week with Italy scraping a draw on their own turf, however the reverse fixture in Madrid did not end well for the Azzurri.

Going into the game, both teams were tied on 16 points, meaning that the winner would take a massive step towards topping the group. Outplayed and outclassed, Italy were humbled 3-0 by a fantastic Spanish display of pace and finishing. They ended qualifying with a record of seven wins, two draws and that single loss, a respectable record but ultimately only enough for a two-leg play-off against the Swedes.

Italy, taking on a Sweden side without the recently retired Zlatan Ibrahimović – surely there could only be one winner. An extremely lacklustre 1-0 defeat followed by a goalless draw capped off by some brilliant Swedish defending, and it was all over. To say that football and the World Cup means a lot to the four-time champions is an understatement. The response of the Italian media, labelling the failure as the start of the ‘apocalypse’, emphasises how much the beautiful game means to the country.

Giampiero Ventura took over at the helm of the Italian national team in June 2016. Having spent his entire managerial career in Italy, Ventura was seen to have the desired experience despite never managing at the highest level. The 69-year-old was tasked with integrating young, exciting players into the squad whilst at the same time maintaining the experienced core of the team. Stylish football and good results were also expected, leaving Ventura with a difficult job.

Despite a good start to the qualifying campaign, problems mounted following the heavy defeat to the Spanish. There are reports that the players held a meeting following the stalemate with Macedonia towards the end of qualifying and again after the defeat to Sweden in the first leg, where the consensus was that Ventura needed to change both his tactics and team selection. He switched between formations too often during qualifying, never allowing the team to develop any kind of system or rhythm, and when it came down to their biggest match in the second-leg against Sweden, the manager resorted to a 3-5-2.

This formation was far too defensive against a team desperately trying to maintain their narrow advantage and didn’t allow the team’s most in-form player, Lorenzo Insigne, to play any minutes. It is incredibly rare that you see a player question a manager’s decision, and yet when asked to come on in the dying stages of the second-leg, defensive midfielder Daniele De Rossi reacted furiously, demanding to know why an attacking player like Insigne wasn’t coming on to try to score that all important goal. This was even more shocking given that De Rossi is one of the most experienced and professional players in the game, highlighting the belief that the players didn’t trust the manager, his tactics, or his team selection.

As you would expect, Ventura has since been relieved of his duties as the manager of the national team, although he would not resign. A string of retirements has followed which is not surprising given the ageing nature of the squad, with Gianluigi Buffon, De Rossi and Andrea Barzagli all calling time on their international careers and Giorgio Chiellini likely to follow suit. This end of an era has been a long time coming given Italy’s poor performances in the previous two World Cups. It feels as though the national team needs an overhaul in staff and players in order to build for the future and return the Azzurri to their rightful place amongst the world elite.

Inevitably, there has been a lot of speculation around who will take charge following Ventura’s departure, but the most obvious is Carlo Ancelotti. He has managed at the highest level all over the world as well as winning major trophies, and he understands how the Italian players operate. Ancelotti would command respect from players and fans alike, whilst being one of the few men that can be trusted with re-inventing the national team. However, he would face the huge challenge of uniting a broken team, as well as integrating young players whilst giving more responsibility to remaining senior players. It is clear that he is the right man for the job, but it wouldn’t be easy, such is the scale of the re-building job that the Italians face.

So, what now? Only time will tell what the future holds for the Azzurri, it is hard to know if they will be able to mount a serious challenge for Euro 2020. If they are able to lure Ancelotti to the role and he is able to rectify the current problems, then anything is possible due to the immense potential of the squad.