23 February 2017 was a dark day. On the coach home after a school trip to Manchester’s Trafford Centre, one of my friends used social media to confirm that the Ed Sheeran lookalike we had seen surrounded by paparazzi was not, in fact, the singer of ginger plumage. Minutes later, more heartbreak; we discovered that Leicester City had sacked Claudio Ranieri. I almost cried. How could football be so unsympathetic? Leicester weren’t even in the relegation zone, and had won the title the season before.

Today has seen two more questionable sackings: Nigel Pearson from Watford, and Danny Cowley from Huddersfield. Both sides teeter above the relegation zone, but have improved under their managers.

When to sack a manager is a well-trodden path of discussion, with different philosophies drawing battle lines in debates. Many would contend that bringing in a new face introduces fresh ideas and hope to a disenchanted dressing room, and gives players a reason to try hard: earning a starting place in the new regime. Examples do support this notion of a “bounce effect” under a new manager. Leicester had won five of 25 league games under Ranieri when he was sacked, but they went on to win their first six games under new boss Craig Shakespeare. Just this season alone, David Moyes, Duncan Ferguson and Nigel Pearson have all achieved immediate, short-term success.

But various studies nuance one’s view away from this, most notably that of Dutch economist Dr Bas ter Weel, who analysed crisis points and managerial changes between 1986 and 2004 in the Dutch top division. Ter Weel found that new managers appointed after a torrid run of form did, indeed, achieve a short-term upturn in results, but that managers who were retained after awful runs also managed to turn the tide (à la Ralph Hassenhüttl and Thomas Frank this season). Either way, after a handful of games, results usually reverted to type.

Contrastingly, footballing ‘romantics’ would maintain that chopping and changing managers inhibits the instalment of a footballing philosophy and the development of players. In some respects, attitudes and styles are engendered over time, and Premier League greats like Alex Ferguson, Pep Guardiola and Jürgen Klopp all faced initial difficulties, which they only overcame with the time to establish their footballing vision.

Rather poetically, Leeds gaffer Marcelo Bielsa analogised that immediate fixation on results is like prioritising industry over the planet’s wellbeing. “The fact we’re not taking care of our planet? Our children will pay the consequences of our acts. With football it will be the same, because we are destroying football and in the future we’ll see the negative effects.” 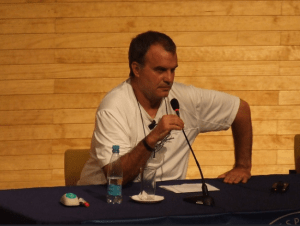 But such philosophising fails to explain the reality that many managers create a distinctive, successful ethos in a short space of time. The young players at Derby County and Chelsea immediately benefitted under Frank Lampard’s tutelage. Ranieri transformed Schmeichel, Kanté, Mahrez and Vardy into players who still produce stellar performances today. And Antonio Conte’s sudden tweak to a 3-4-3 with Chelsea in October 2016 started a 13-game winning streak that helped them storm to the title. None of them needed an extended spell to make an indelible mark on their players.

And who is to say that resting with one manager necessarily produces progress anyway? Arsenal’s final years under Arsène Wenger were years of stagnation, for all their glory and financial inhibitions.

For me, the stats and testimonies point to one conclusion: most managers a club can access for appointment will not be a significant long-term improvement on their last. And even if a new era of prosperity is ushered in, or a relegation is suffered, a whole host of other factors could be more responsible: personalities, recruitment, personal issues, the backroom staff, injuries, pure luck, or even crazy occurrences.

Should Marío Zagallo and his entire coaching staff have been sacked after the 1998 World Cup final defeat to France, the day when star player Ronaldo suffered from a terrifying fit at the team hotel and subsequently faltered on the pitch?

Could Harry Redknapp claim credit for Jordan’s 8-0 victory over Bangladesh in March 2016, when he relied on one of the coaches to translate his every word and pick most of the line-up?

Can Klopp claim full credit for Liverpool’s Champions League victory last season, even when getting into the final eventually hinged on the intuition of a ball boy and Trent Alexander-Arnold?

My answer to these questions is no. While extreme examples, they illustrate the fact that the success or failure of a football team entails so much more than how “good” a manager is. Tactical nous and personal qualities are only part of the equation.

Of course, football clubs are not blind to this. But what we have arrived at is a culture of fairy tales and financial worries, in which club owners envy the triumphs of others. As Watford dismiss Nigel Pearson, they must be looking forlornly at the joys of Sheffield United, Wolves, and Burnley, wondering why aerial football under Sean Dyche works brilliantly, or how Wolves get their foreign recruitment pitch perfect. Success looks so tantalisingly close, and sometimes on a limited budget

After what has been a rambling article, it is reasonable to ask for a definite conclusion. Here we go, then. It comes down to a question of humanity. For the amount of sacrifices managers make with their personal lives, more sympathy should be afforded before pulling the trigger, uprooting them and their families, when the next guy to walk in will likely be no Messiah himself. And maybe there’s something to be said for the freedom of ideas that springs from an environment where one feels safe to explore and experiment, without fearing for one’s livelihood after a couple of uncontrollable glitches.