A Tribute to Andy Irons, Surfer 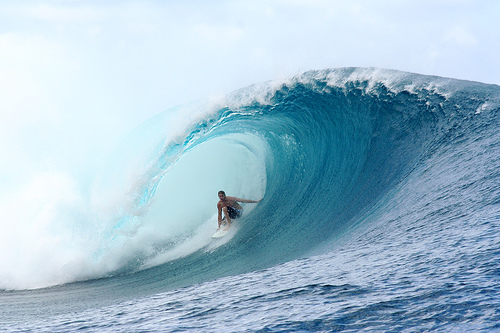 Andy Irons grew up in Hawaii, learning to surf at a young age

Three times World Champion, Andy Irons was found dead in his Dallas hotel room on 2nd November. He is reported to have died of Dengue Fever whilst on a stop over during his journey home from Puerto Rico to Hawaii.

Irons, 32, was at the forefront of the surfing community for the past decade and the loss will be a devastating blow for the Association of Surfing Professionals, whose flagship event, the World Championship Tour (WCT), he was a three times winner of.

Growing up in Hawaii, Irons learnt his art on the shallow and treacherous reefs of the North Shore. He was known for his bravery, which, combined with powerful turns and gravity defying aerial manoeuvres, made him a formidable opponent in competition and, as the leading personality of Australian surfing manufacturer Billabong, influential to fans and peers alike.

But it will be for his intense rivalry with 9 times World Champion, Kelly Slater, that he will be best remembered. Having already won the WCT an unprecedented 6 times in seven years, Slater was provoked by the cocky young Irons to abandon retirement in 2003. Slater was eager to exert his dominance over Irons, who had blown away the field to win the 2002 WCT tour. However, Slater lost.

Irons was able to match and surpass the legendary Slater for his competitive instinct and aggressive surfing style, taking the next two titles to secure a hat trick of wins from 2002 to 2004.

Their rivalry was defined by incidents of infamous “trash talk” during competitions, which often boiled over and led to Irons admitting he would “go to bed literally thinking about how I could punch him in the face.”

Recent years have seen a mutual respect develop, with both men combining to create a film in 2009, A Fly in the Champagne, documenting the rivalry that defined surfing for the much of the last decade.

His iconic status led the Governor of Hawaii to announce February 13th as “Andy Irons Day”. Irons leaves a wife who is seven months pregnant. Shock waves were felt across the globe.