‘A new era for English rugby.’ How many times have we heard that before? 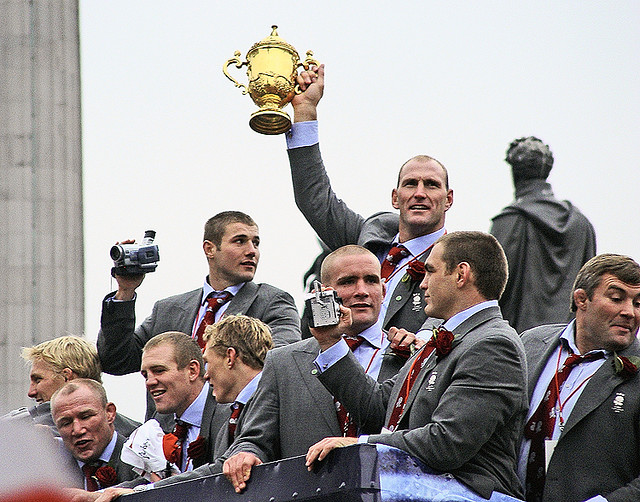 As an England Rugby fan, it is hard not to be cynical at the moment. Failed World Cup campaigns, a string of unsuccessful coaches, and the uninspiring style of play have come to define the national team which has been in general decline since 2003. We have seen our national sporting heroes, men at the height of physical prowess and at the pinnacle of their profession, devolve before our very eyes into rowdy midget-throwing – and dare I say it – football-like hooligans.

And being the sceptic that I am, I found it hard to be as optimistic as Stuart Lancaster, the interim England head coach, who has hailed a ‘new era’ for English rugby. Statistically, I find myself unable to argue with this; indeed, a squad including nine uncapped players and four players with just one cap each is certainly ‘new’; however, this kind of cliched ‘new era’ business brings back memories of the bad old days when caps were handed out like Domino’s flyers in a student town. Have we returned to that dark period of English Rugby?

Luckily, I don’t think we have. In fact my initial cynicism has been replaced by a surprising upturn in hope. Maybe my optimism is as unfounded as Shontayne Hape’s selection for the last World Cup but there is undoubtedly something refreshing about Lancaster’s first weeks in charge. The man seems to diffuse calm and temperament. He seems uncomplicated and unpretentious – it’s up to Leeds for base-camp now, not the bucolic setting of Pennyhill Park. But what has impressed me most about Lancaster to date, is the manner in which he speaks about his players.

For example, when discussing the talented new-comer Brad Barritt, Lancaster said, in his typically laid-back fashion, “I trust him implicitly”. When talking about Owen Farrell, Lancaster said that he had taken the time to “meet him personally”, and that he was “impressed by him as a character and a person”. The same can be said for Callum Clarke, the most surprising of all Lancaster’s selections. Lancaster’s justification for his inclusion: I have “known him since he was fourteen…and seen his leadership quality at Leeds and with the England U20s”. Clearly, Lancaster cares about the characters in his team and this can only be a good thing.

Back in 1999 Sir Clive Woodward took his World Cup squad to train with the Marines. The main purpose of this was to get his men as physically fit as they could be and to test their mettle. In a phone call a few weeks after the training camp, having chosen his final squad, Woodward asked the Major whether he would have selected the same players as he had, based on their performance at the training camp. The Major replied that he didn’t know much about rugby, being a Millwall fan, but said that there were three players in Woodward’s squad that he personally would not have gone into battle with, had they been marines. He went on to make the distinction between ‘energisers’ and ‘energy-sappers’, people, and in this case players, who would always give to the team and those who would blame others for their failings and put themselves above the team.

England went to the World Cup and were knocked out in the quarter-finals. Four years later, Woodward had purged his team and there was not an ‘energy-sapper’ in sight; England won the World Cup. Now before you navigate away from this article in disgust at my over-simplifications, I would just like to take a moment to state that getting rid of ‘energy-sappers’ will not necessarily win you a World Cup. Unfortunately for the Georgian national team, even if it were filled to the rafters with the best ‘energisers’ around, they can still expect an early exit in the next World Cup, and in fact those of the foreseeable future. My point is more one of principal. In rugby, people matter.

This is why I am excited by Lancaster. Just like Woodward, people matter to him. This isn’t to say, of course, that Martin Johnson, the latest England head coach to lose his job, did not care about the characters of his players; he was captain of Woodward’s side in 1999 and 2003 remember. But it is crucial to note that rugby has changed a lot even since 2003. After all, it was only made professional in 1995. Players are bigger, faster, and better than they have ever been before; performance and in particular winning is key – how many times do we hear “the win is the most important thing”? This is the inevitable effect of professionalism.

However, in my opinion, this professionalism makes the people, and the personalities, more important than ever before. Something that we as spectators forget is that the England set up is far removed from the Club set up. In their clubs, the players eat, train, live, and even shower together on a daily basis; they are real friends and therefore they fight for each other as real friends on the pitch as well. The England situation is different; the selected players are lifted directly from the comfort of their Club, and dropped into a dressing room of people that they might not have met just one week before they are expected to play together in front of 80,000 people at Twickenham. It takes a special collection of personalities to be able to come together in this short a timescale and under such intense pressure.

Unfortunately, whether having a ‘better’ set of characters in the England dressing room will improve English rugby or not is impossible to say. It is even impossible to say, distanced as we are from the behind-the-scenes activity of an England training camp, whether Lancaster has indeed chosen ‘better’ characters at all. However, if you ask any person that has played rugby at any level they will tell you that it is a sport where people matter. The reason: because putting your body on the line for people you like is a lot easier than doing it for someone you don’t know. So, maybe Lancaster’s emphasis on the person will have no effect on how England perform in the upcoming Six Nations. But maybe, just maybe, it will galvanise a group of professionals into a group of friends and maybe we will see no ‘new era’ of English rugby but instead, a return to something like Woodward’s world-beating era.