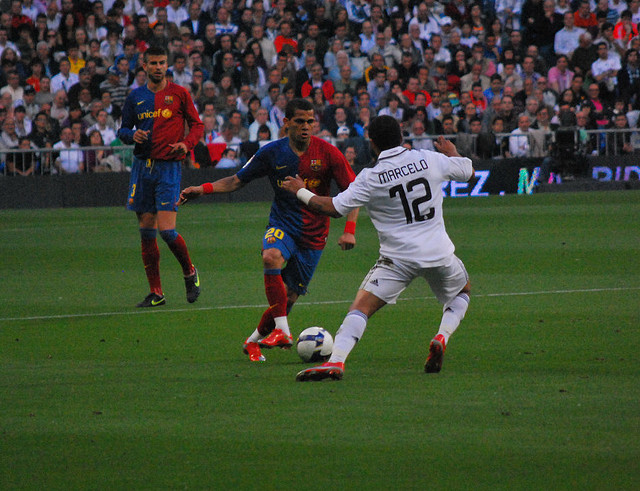 Rarely has a football match set the heart racing quite like the modern day clash between the Spanish giants Barcelona and Real Madrid. A fixture steeped in allegorical tradition transfixes the footballing world as the two largest cities in Spain, two of the most decorated clubs on the planet and two different political predilections (Spanish nationalism vs. Catalanism) go toe to toe, in what reliably serves up the most compelling 90 minutes of the season.

Sunday’s match delivered yet another absorbing clash as the two titans matched each other blow for blow in a fascinating 2–2 draw at the Camp Nou. The heavyweights (wishing to continue my use of boxing jargon) Cristiano Ronaldo and Lionel Messi both produced sublime, neighbouring on virtuoso displays, bagging two goals each as they continued their staggering scoring records: Ronaldo has now scored 160 goals in 155 matches for Madrid, and in case salivating over that wasn’t enough, try chewing on the fact that Messi has now notched 169 goals in his last 155 games! During the game, Gary Lineker referred to Messi as “MESSIAH,” a comment rescued from blasphemy by the seemingly boundless skill of the 25-year-old Argentine as well as the adulation (perhaps even approaching deification) of the young maestro amongst the Barça faithful. And as if watching that particular galvanic duo wasn’t enough, the other skill on show is aptly illustrated by the fact that ex-Premier League tour-de-forces such as Essien and Modric join international superstars like David Villa in simply warming up the bench! However, it would be unnatural for the fixture to have heroes without a villain, a role usually adopted by the truculent Pepe, the malicious Madrid defender who shares an unloved bottom shelf of public opinion with Andrew Mitchell, Lance Armstrong and Kate Middleton’s photographer.

However, the intrigue of El Clásico transcends the individual talent on show: it also represents the clash between two very different footballing ideologies. Barcelona are very much the purist’s favourite, with their intricate passing and mesmeric movement leading to Sir Alex Ferguson referring to their style as like a “carousel” following the 2009 Champions League final. The infamous carousel produces a centrifugal force significantly out of proportion with the size of the artisans who operate it, leaving the opposing midfield nauseous and dizzy. There are sceptics who claim that Barcelona ‘couldn’t do it on a wet Tuesday night at the Britannia’ but Valencia won 1–0 there in mid-February (not only dispelling the exact theory, but also the more general idea that diminutive Spaniards are unable to cope with the physicality of the English game). Confounded, annoyed and sometimes just plainly embarrassed by the Barcelona merry-go-round, Real Madrid’s hopes often rest on a smash n’ grab counter attack or the singular brilliance of Ronaldo, which contrasts sharply to Barcelona’s careful build-up play. When Madrid do attack, their panoply of attacking talent cuts through the makeshift and even threadbare Barcelona defence, consistently threatening Valdes’ goal. However, these forages forward are kept to a minimum as Barcelona treat the football like a precious commodity, retaining it at absolutely all cost.

Any mention of El Clásico would be incomplete without reference to the self-anointed Special One. The supercilious José Mourinho has busied himself with preventing the Barcelona juggernaut marching inexorably towards yet more silverware with considerable success so far. The Real Madrid boss, imbued with passion and competitive spirit as well as often displaying a platonic love for his players, contributes considerably to making this fixture the absorbing encounter it is today. Witty, charming and slightly egotistical, Mourinho ensures the drama lasts more than the full 90 minutes with his post-match press conferences: when Madrid lose he is capable of generating more excuses than the Leveson Inquiry, citing the faults of referees, opposing players, UEFA and even himself in order to deflect the blame from his precious players. We are only blessed (or burdened, depends which way you look at it) with one Jose Mourinho, with his callow Catalonian adversary Tito Vilanova appearing ostensibly to be as cool as a cucumber, and as interesting as a lettuce (relative to Mourinho’s own high standards).

This all serves to produce a football match which delivers, without fail, unparalled levels of drama. Messi, Mourinho and Ronaldo have all contributed to the rebirth of a previously quasi-superannuated event, to such an extent that huge European games such as Marseille vs. PSG, Porto vs. Sporting Lisbon and the Milan derby rather drowned in anonymity on Sunday evening. There is a gap, verging on a chasm, between this clash and the second-best game to watch in world football. The Manchester derby? Like comparing Hollywood to Hollyoaks!