Why to Say No to a “New Trident” 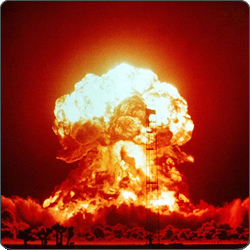 Trident is the UK’s nuclear deterrent

Trident, the United Kingdom’s nuclear deterrent, has once again become an important issue in British politics this year. Indeed, during the Leaders’ Debates, Nick Clegg questioned the logic of excluding Trident – “one of the biggest items of defence expenditure” – from the defence review expected to be held after the general election. On the day of the general election this year, Thomas Harding, defence correspondent for the Telegraph wrote, “The issue of replacing the submarines and their missiles has been among the few strongly debated defence issues during the election campaign.” In light of this high level of publicity, and a relatively recent CND report on the issue, this is a rare opportunity to oppose the renewal of Trident and nuclear weapons in general.

Currently, the Trident system consists of four Vanguard-class submarines, each of which can deploy sixteen missiles; each missile can carry twelve warheads. The destructive capacity of each warhead is estimated as eight times that of the atomic bomb dropped on Hiroshima. Trident entered service between 1994 and 2001 and the replacement for the different elements of the system would have to be carried out between 2016 and the late 2030s. Any replacement system could potentially last until 2080. In their “Strategic Defence and Security Review” the government has announced that it will “extend the life of the current Vanguard class submarines and re-profile the programme to build replacement submarines”, whilst taking “the second investment decision (Main Gate) finalising the detailed acquisition plans, design and number of submarines around 2016”. Thus, it is clear that the decision to renew trident will implicate the United Kingdom on a pro-nuclear path at least until this generation of students has reached retirement age.

The government maintains the “need for a minimum effective nuclear deterrent as the ultimate means to deter the most extreme threats.” Yet what these threats are is not made clear, since it is acknowledged that “No state currently has both the intent and the capability to threaten the independence or integrity of the UK.” So essentially, the primary justification for possessing Trident is that, “we cannot rule out a major shift in the international security situation which would put us under grave threat” and because the possession of a system, which, “If all of the warheads from one submarine were fired at once they could potentially kill a population around the size of the UK” is necessary in order to “maintain regional and global security”.

This strikes me as being illogical and unrealistic, since it initially puts forth the idea that the UK is separate from world affairs, that the fact that the UK will continue to develop nuclear weapons won’t affect other nations’ decisions. It accepts this, but still presupposes that the continued existence of such weapons will bring a magical global peace which has never existed.

The renewal of Trident does not even seem to fit with the governments’ defence policies generally. The main risks to national security are stated as, “terrorism, cyber security and civil emergencies in the form of natural hazards or accidents”. Evidently, the latter threat can be ruled out straight away as being avoided by the existence of nuclear weapons. Apart from the obvious fact that listing these perceived threats to the United Kingdom lends little credibility to the myth, pronounced by Tony Blair’s government, that Trident “has provided the ultimate assurance of our national security“, the complete lack of referral to Trident in the sections concerning terrorism and cyber security suggests that nuclear weapons have no role in protecting this country against any of these basic threats. Indeed, it could be argued that if the government believes that these are the greatest threats, then pursuing Trident replacement whilst cutting the rest of the defence budget is a neglect of their responsibility towards national security. Since the horrors of 9/11, the terrible majesty in the protection of possessing a nuclear deterrent should have been dethroned.

This raises the question of what purpose they do serve. The traditional Cold War argument appears to be that nuclear weapons prevent smaller conflicts between nuclear powers due to the fear of an escalation into nuclear war. However, this did not prevent war between India and Pakistan, or proxy war between the USSR and the USA in Korea. Furthermore, the Cuban Missile Crisis is a reminder that in the past the possession of nuclear weapons has almost caused nuclear war. Equally worrying has been the trend reported upon by Oliver Postgate in the New Statesman, that, “While claiming that these nuclear ‘weapons’ are held passively as ‘a last resort deterrent’, they have been quietly allotting strategic military roles to them”. If this is true, then the UK is potentially contributing to global insecurity and the threat of annihilation.

The possession and transportation of nuclear materials poses a health and environmental risk to people in their proximity. To begin with, it is necessary to heed what the Director of Nuclear Policy and Security told the House of Commons Defence Committee – “Any warhead is subject to aging processes. These are not necessarily wholly predictable”. This is worrying in itself, but coupled with the fact that, “With a restriction in testing in the future the competency of the relevant people at Aldermaston will decay, fall off, until the point where they are unable or unwilling to say ‘This is still safe’”, the cruel logic of the system is exposed. The only way to gain the information necessary is to keep people who live in Aldermaston, Devonport, Faslane, or anyone encountered on the journey to transport the components and warheads. Concern about safety is not merely theoretical; there have been accidents. For example, a “naval chief in charge of a nuclear-powered submarine” “Commander Andy Coles, 47, lost his command of the submarine on Friday.” In aircraft accidents related to Trident alone, over 250 people have died since 1966. Also, “The MoD Chief Scientific Adviser earlier expressed doubt that the safety of the Trident warhead could ever be properly assessed, given that the calculations would only be carried out at one installation, Aldermaston.” So even after these disasters, it is not certain that similar or worse things in the future could be prevented.

The final argument to be dealt with is that if Trident is not replaced, jobs will be lost. The argument against that is summed up in this paragraph from CND’s report on Trident, Jobs and the UK Economy: “If Trident replacement is cancelled, only the shipyard at Barrow-in-Furness stands to lose a significant number of jobs. But that will not be for at least six years, giving time to ensure a regeneration plan for the shipyard and the town. Long before then, tens of thousands of jobs would disappear in conventional defence manufacturing and the armed forces if Trident replacement goes ahead.”

In conclusion: Trident has no role in guaranteeing world peace, it is physically and environmentally dangerous to people living nearby, and possession of Trident is in breach of international obligations, such as the Non Proliferation Treaty. Also, the renewal of Trident is economically illiterate, it implicates poor communities in the agent of self destruction, and it reflects the government’s corrupt priorities in the middle of a shock doctrine in which the welfare state and education are being destroyed, and which does not deal with global warming. Therefore, as a member of Durham University Green Party Society, I have decided to campaign on this issue, to raise awareness and hopefully convince people that Trident is absolutely wrong.