Why did Mars lose its atmosphere? 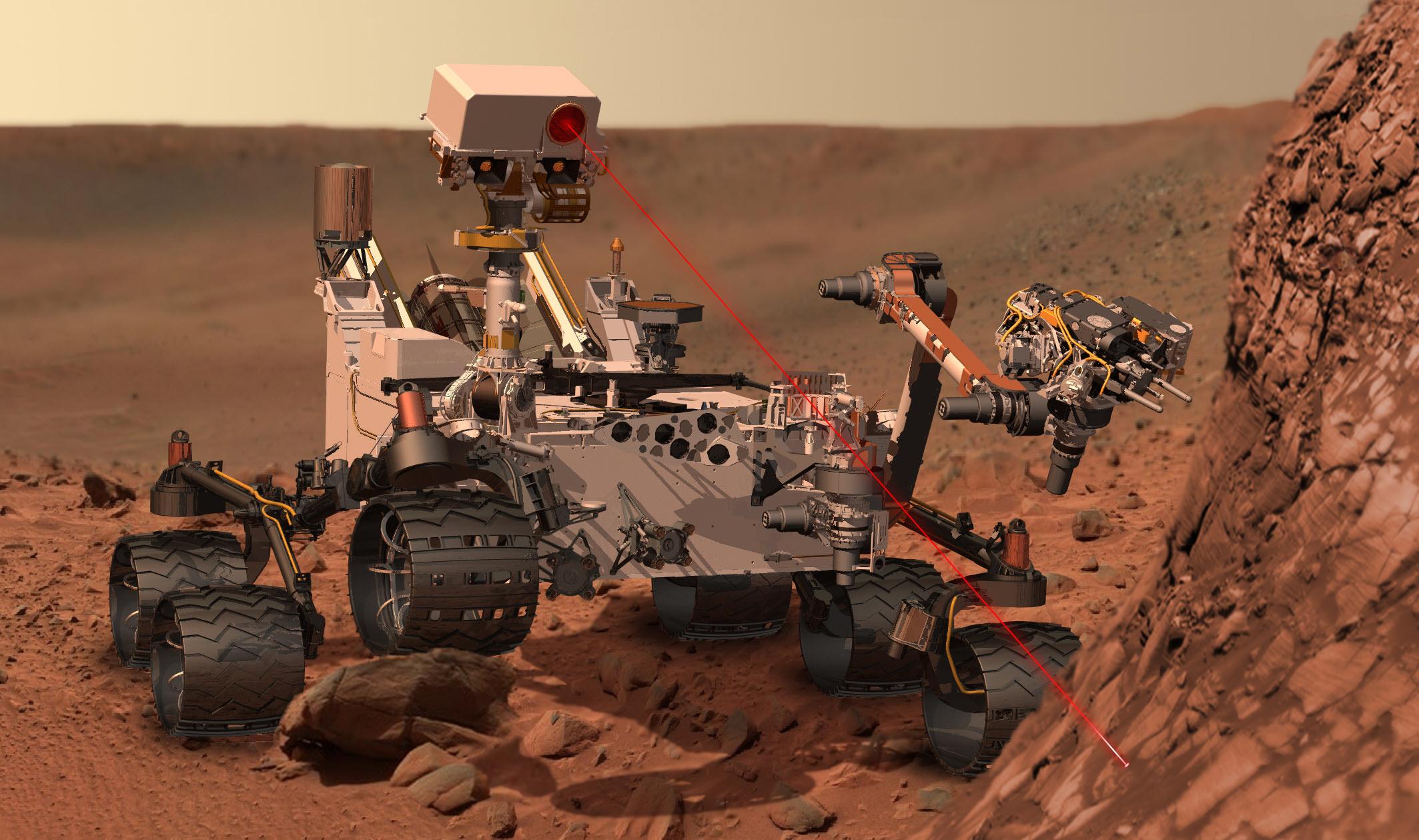 Curiosity investigating the surface of Mars

Our closest planetary neighbour has fascinated humanity since the ancient civilisations of Egypt and Babylon and, for most of that time, we have dreamed of finding evidence of life on Mars. With the advance of technology in the form of telescopes, astronomers observed apparent oceans and seasons on Mars that lead to theories of a living Mars with oceans, rivers and plant life. However, with the advent of space exploration in the 1960’s and 70’s, a very different picture of Mars came to light. Ever since the first successful flyby of Mars by Mariner 4 in 1964, Mars has been documented as a desolate and barren world, devoid of life.

It appeared that the Red Planet was not as similar to our own as we first thought, but further flybys, and eventually several orbiting spacecraft, sent back tantalising glimpses of what appeared to be ancient river channels and valleys very similar to that on Earth. Perhaps there once was liquid water on Mars, but for some reason it was unable to retain it as Earth has. It has taken us until the 21st century to land unmanned spacecraft on Mars’ surface that are capable of collecting enough data to start understanding its history. NASA’s Mars rovers Opportunity, Spirit and Curiosity have provided us with concrete evidence that Mars once had flowing water on its surface, as well as an atmosphere closer to that of Earth’s. But this raises the question: why has Mars become a lifeless planet when it once was very similar to Earth?

The conditions on Mars when it first formed four billion years ago were similar to that of Earth, with a thick atmosphere rich in carbon dioxide (CO2). This insulating greenhouse gas would have allowed water to remain stable as a liquid at the planet’s surface, giving rise to river systems that flowed into shallow seas. This hydrated geological age on Mars is known as the Noachian and is characterised by high levels of meteorite impacts and hydrated clay minerals, as documented by Opportunity. However, the two following geological periods, the Hesperian and Amazonian, are characterised by acidic and drier conditions due to the loss of the thick atmosphere. The modern day atmosphere of Mars is a hundred times less dense than that of Earth’s, and it is thought that the majority of Mars’ atmosphere was lost very early on in its history.

Whilst Mars is Earth’s closest neighbour, it is by no means the most similar planet to Earth within our solar system, which gives astronomers basis to hypothesise on Mars’ history in comparison to our own. Earth is the ‘Goldilocks’ planet within our solar system; everything is just perfect for the development of life. The gravity on Earth is strong enough to maintain a thick atmosphere with life supporting oxygen, and the dynamo within the iron-nickel outer core produces a planetary magnetic field that protects us from damaging charged particles ejected from the sun. Mars, however, is not as well suited for life as Earth, and certainly would not meet Goldilocks’ exacting standards. The radius of Mars (3395 km) is nearly half that of Earth (6371 km), meaning that gravity on Mars is 0.37 g when 1 g is normal Earth gravity. Mars also has no intrinsic magnetic field, as the dynamo within the core of the planet has ceased to rotate, possibly due to an accelerated rate of heat loss due to its smaller size. Under these conditions, it appears unlikely that Mars would have had any chance of holding onto its vital, life giving atmosphere.

The current line of scientific thinking on the actual cause of atmospheric loss on Mars involves the process of sputtering. When the Sun throws out a solar flare, it also ejects charged particles that bombard the planets in our solar system, like a form of space weathering. Sputtering occurs when the charged particles collide with a molecule, causing it to split and form charged ions. The charged ions may be attracted to the magnetic field, which is produced by the solar winds, and taken from a planet’s atmosphere. Alternatively, the charged particles may remain within the atmosphere and cause more collisions, which effectively ionises the atmosphere, making it much more likely for the atmospheric gases to escape into space. Mars, without a protective magnetic field, has no defence against the erosive power of the solar winds. Therefore it is assumed that this is the most likely method in which Mars lost its atmosphere, and therefore its ability to retain liquid water at its surface.

In light of this theory, several new spacecraft have been launched for the Red Planet within the last few years in order to study the interaction between the solar winds and Mars’ atmosphere. On September 21st of this year, NASA successfully put their new Mars satellite, the Mars Atmosphere and Volatile Evolution (MAVEN) probe, into orbit. MAVEN’s primary mission is to study and image the Martian atmosphere at a level of detail hitherto unheard of in orbits ranging from 125 km to 6000 km above the planet’s surface. With MAVEN’s data, NASA’s astronomers will be able to witness sputtering and extrapolate their findings back through Mars’ history to create a clearer picture of its past. India also put its Mars Orbiter Mission (MOM) probe into orbit around Mars on September 24th of this year, with an objective to study the surface morphology of the Red Planet. The European Space Agency (ESA) and Russian Federal Space Agency are also planning to send orbiter and lander crafts to Mars in 2016, to search for possible ancient microbial life in Mars’ rocks. It appears that there is a global revival in space exploration thanks, in part, to our seemingly endless curiosity of our neighbouring lump of red rock.