“Strange is this little animal, because of its exceptional and strange morphology and because it closely resembles a bear en miniature. That is the reason why I decided to call it little water bear” – Goeze. Goeze, a German pastor, was the first person to describe tardigrades (also known as water bears) in 1773.

Tardigrades are a ridiculously hardy phylum of organisms, one thought to consist of over 900 species with more being discovered each year. However, DNA barcoding suggests the true number of tardigrade species could be higher still.[1] These little creatures range from 0.05mm to 1mm in size and possess 8 legs, each ending in 4 to 8 claws. Interestingly, every mature “little water bear” has the same number of cells and after maturity, further growth is achieved through cell elongation, as opposed to cell division.

Although strangely cute in appearance, tardigrades can withstand extreme conditions, such as radiation thousands of times higher than the human lethal dose and pressures 6x greater than that found in the deepest parts of the ocean[2].  They are not pathogenic or known to cause any ill effects on the crops they are often found on, which raises interesting scientific questions about how and why they evolved in such a way. Scientists are also interested in understanding how their physiology works in terms of their resilience to certain environmental factors[1] 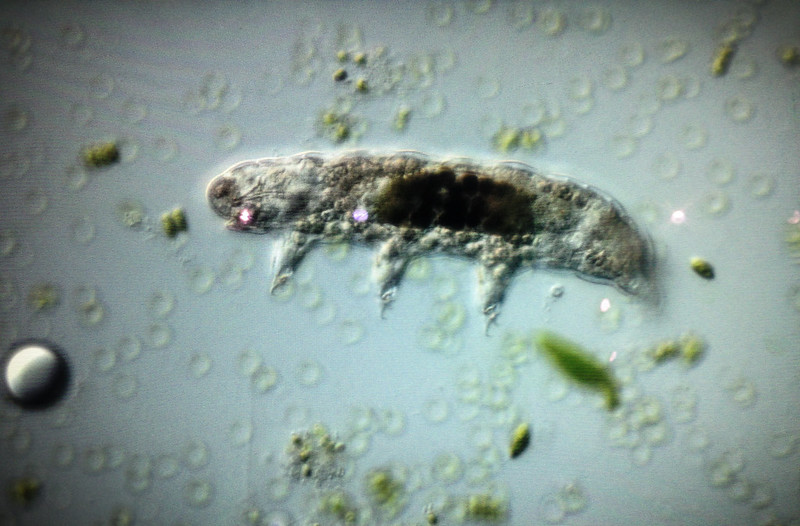 A Tardigrade under a microscope. Image by Rosa Menkman. Available on Flikr under Creative Commons 2.0 license.

In 2007, a group of researchers from Sweden sent roughly 3000 tardigrades into space on a European Space Agency mission. The animals spent 10 days in orbit before being returned to earth where they were rehydrated. They were found to have survived the great vacuum of space and were also still able to produce viable embryos, which is truly remarkable. This mission made tardigrades one of the first animals to survive the concomitant stresses of exposure to space, including cosmic rays, extreme radiation and being in a vacuum.[3]

So, why are they so tough? Tardigrades can withstand such extreme conditions because they can enter a process, called Cryptobiosis, in which all metabolic reactions are reversibly suspended. It is this mechanism that makes tardigrades so unique in their ability to survive extreme conditions. It pushes them into a death-like, dried up state[4] by which they can survive for decades. However, the longer they spend in this dehydrated state, the lower the likelihood of their revival upon re-entry into more favourable conditions. Upon entry into this state, tardigrades produce a protective gel-like substance called trehalose. Trehalose suspends and protects organelles and membranes.[5] Some have made the controversial claim that tardigrades have travelled to earth from space on debris, as they are so adapted to surviving harsh environments not widely found on earth.

Tardigrade DNA’s ability to resist damage from radiation, such as x-rays, is one of particular interest to scientists. It is believed this resistance results from a mechanism which protects their DNA from severe dehydration. A lack of water can cause DNA to denature, just as exposure to X-rays does. A DNA-associating protein, unique to tardigrades, called Dsup (Damage suppressor protein) has now been isolated. This curious protein reduces the incidence of DNA breakage caused by radiation and decreases X-ray-induced damage by 40%. Scientists were able to engineer mammalian kidney cells to express this protein and discovered that the engineered cells were also able to suppress some X-ray-induced DNA damage. These findings are extremely interesting and relevant for human medicine, potentially suggesting the transfer of such resistance to humans, as opposed to just a few cells in a petri dish, may be feasible in the future. Such therapies could one day benefit people undergoing radiation therapy for cancer. Resistance could be given to healthy cells, preventing damage occurring to them and allowing cancerous cells to be targeted more accurately. Furthermore, treatments could be beneficial for people working in industries with high levels of exposure to radiation, such as in nuclear power plants. Aside from medicine, these discoveries are also relevant in the agricultural industry. Our ability to grow crops on Mars, where there are very high levels of radiation, may be radically increased by using these techniques. Elucidating how tardigrades are so resistant to dehydration could be invaluable in modifying crops to withstand our changing climate in the future.

Understanding these little creatures that live such a quiet, unassuming life could be key in making huge advances in medicine and agriculture. The discoveries so far are only the beginning of what is sure to be a hugely relevant and exciting field.