TRAPPIST-1: An Exoplanet Home from Home?

On the 22nd February 2017, NASA announced the discovery of 4 planets orbiting the ultra-cool dwarf star TRAPPIST-1 to bring the total in the system up to 7 exoplanets. This news has gripped the public imagination because several of the planets are thought to be capable of supporting liquid water on their surfaces and lie within the ‘Goldilocks’ zone of the star. It has therefore been theorised that the planets in the TRAPPIST-1 could support human life and colonisation. This article will take a look at the science behind the discovery and discuss whether TRAPPIST-1 could really be our future favourite holiday spot.

TRAPPIST-1 is an Ultra-Cool Dwarf Star which means that it is similar in size to Jupiter, at only 8% of the size of our Sun, and is under 2430˚C compared to the 5500˚C of the Sun. It is located 12 parsecs from our Solar System or, if you are not an astronomer, 39 light years away which is 229 trillion miles. The initial discovery of 3 of the exoplanets orbiting TRAPPIST-1 was made using the imaginatively named Very Large Telescope (VLT) in Chile when dips in the infrared light curve from the star were detected. In astronomy, a transit is the passing of a celestial body (in this case a planet) in front of another body (a star) to hide a small part of it from the observer. Therefore, the dips in the light curve from TRAPPIST-1 were interpreted as the passing of exoplanets across the face of the star as viewed from Earth.

This initial discovery encouraged further monitoring of the TRAPPIST-1 system in a combined effort between ground and orbital telescopes. The ground array of telescopes included the pair of TRAPPIST-South in Chile and TRAPPIST-North in Morocco, the UK InfraRed Telescope (UKIRT) in Hawaii, the William Herschel and Liverpool Telescopes in La Palma and the South African Astronomical Observatory Telescope. Orbital telescope, the Spitzer Space Telescope, obtained some of the clearest data of the network in a continuous monitoring period of 20 days in 2016. During this period, 34 clear transits in the light curve were observed and 4 exoplanets were identified (TRAPPIST-1d, TRAPPIST-1e, TRAPPIST-1f and TRAPPIST-1g). The outermost planet, TRAPPIST-1h, was identified from a single transit shaped signal that had a duration of 75 minutes but as there was only 1 signal, not as much is known about the final planet in the system. 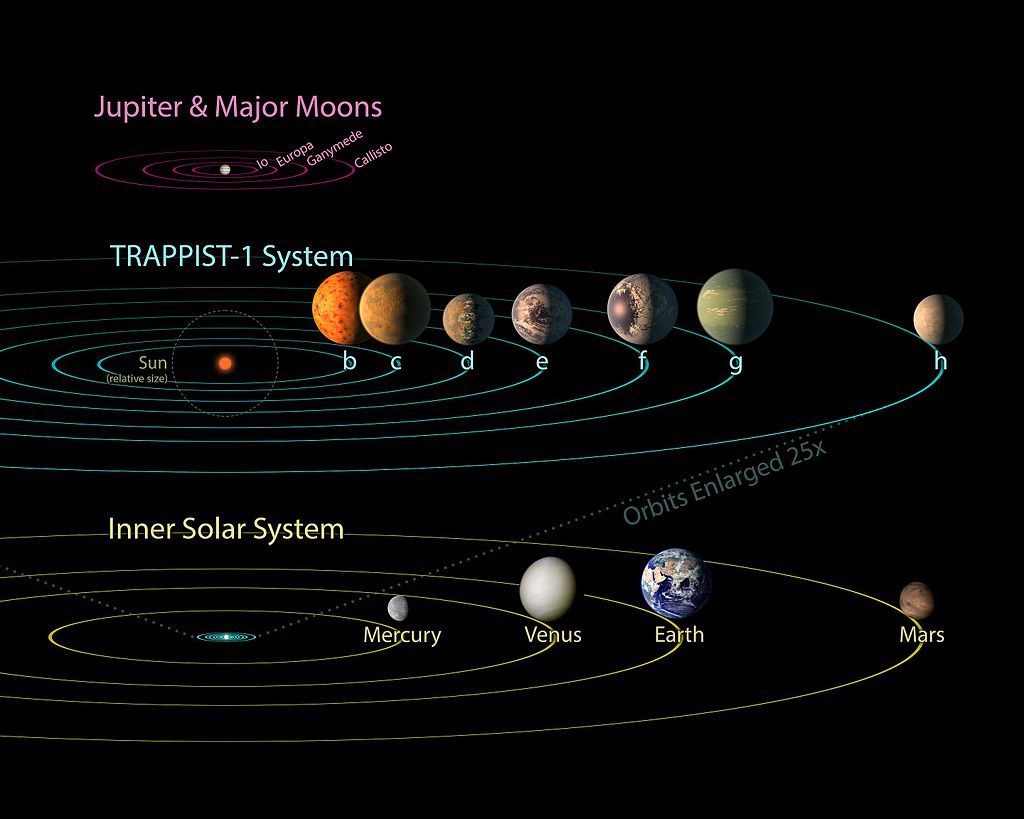 A schematic comparison between the orbits of planets in the TRAPPIST-1 system and our own solar system.

Much of the media attention on TRAPPIST-1 is due to the intriguing characteristics of the system. The 7 planets are much closer together than the planets in our own system as all 7 planets fit within the same distance between the Sun and Mars. Several interesting phenomena arise from this close proximity of the planets including a near resonant chain of the orbital periods of the inner 6 planets. Orbital resonance occurs when orbiting bodies exert a periodic gravitational influence on each other but this has never been observed in such a long chain before. Jupiter’s moons Ganymede, Europa and Io also display resonance but only between 3 celestial bodies. It is thought that the orbital resonance in the TRAPPIST-1 system formed due to the planets forming much further away from the star and that they migrated inwards through disc-driven inward gravitational migration.

In terms of the exoplanets themselves, the mass estimates of the first 6 planets suggest that they have rocky compositions similar to the inner rocky planets of our solar system. The resolution of the current data is not great enough to uncover the volatile (easily vaporised chemicals) contents of the planets and therefore the composition of their atmospheres are unknown. Planets b, c, e, f and g orbiting TRAPPIST-1 have sizes similar to Earth while the other 2 (d and h) are in between the size of Mars and Earth. As the inner planets especially are very close to TRAPPIST-1, it is thought that they may be affected by tidal heating and/or tidal locking. Tidal heating acts to heat the planetary body by deforming the shape of the planet through gravitational attraction. Tidal locking is a phenomenon represented by our very own Moon, when the orbital period of a body matches the rotational period. This means that the same side of the Moon always faces the Earth, or the same side of the planet always faces the TRAPPIST-1 star. It is thought that the inner 3 planets of the TRAPPIST-1 system experience tidal heating and/or gravitational locking to some degree and would therefore experience a runaway greenhouse effect. 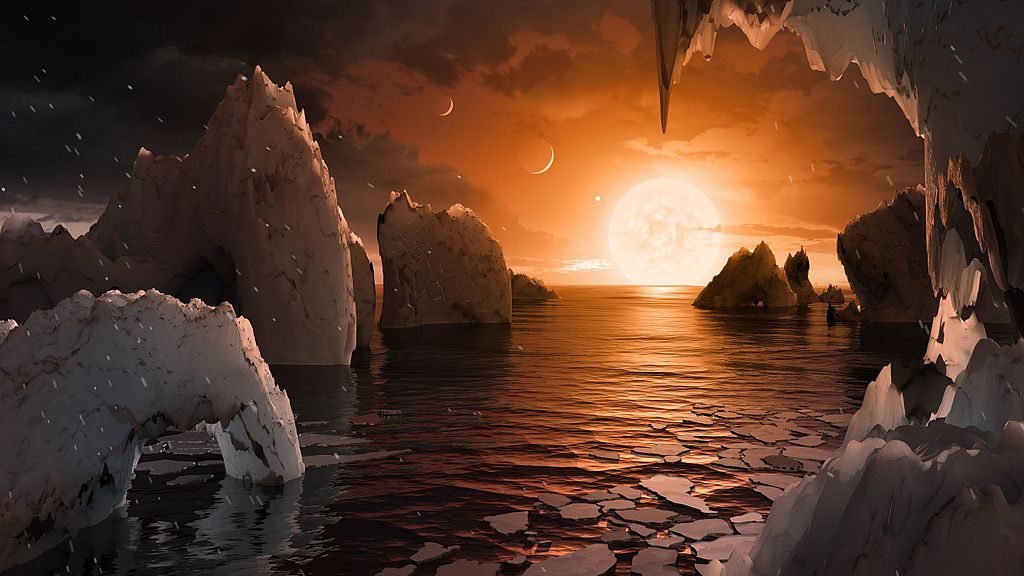 An artist’s impression of the surface of TRAPPIST-1f, one of the exoplanets that are thought to be able to support liquid water at the surface.

Many sci-fi books and films have imagined a future colony or ‘New Earth’ in a far-away system that mankind will flee to in order to escape the troubles on Earth. But how realistic is the idea that we could live in the TRAPPIST-1 system? In terms of habitable planets, TRAPPIST-1 has quite a few possibilities. Planets e, f and g could harbour liquid oceans on their surface, are a similar size and density to Earth and do not receive too much or too little solar radiation. The inner 3 planets (b, c and d) may receive too much solar radiation and may be too unstable due to the gravitational effect of being so close to TRAPPIST-1. In contrast, TRAPPIST-1h (the outermost planet) receives too little solar radiation and so is unlikely to support liquid water oceans on the surface. However, if planet h had a very thick, hydrogen rich atmosphere similar to that of Venus, the insulation from the atmosphere could support limited water on the planet’s surface.

Before everyone gets carried away with bidding for a plot on TRAPPIST-1f, it is important to take a closer look at the problems of colonising another planet. As we don’t know the volatile content of the exoplanets, we don’t know which gases form their atmospheres or whether they have atmospheres at all. The effect of tidal locking and tidal heating could be more extreme than expected, due to the extremely compact nature of the TRAPPIST-1 system. There are other variables that make colonisation of the TRAPPIST-1 system, for example harmful radiation levels from TRAPPIST-1, that make any chance of humans being able to live there extremely slim.

So the few potential planets in the TRAPPIST-1 system that could support human life may not be as idyllic as Earth, but would we ever be able to even reach it? The distance of 39 light years, or 229 trillion miles, is relatively close in terms of astronomy as our own Milky Way Galaxy is 100,000 light years across. However, our space propulsion technology is not equipped for rapid long distance travel. If NASA decided to send a crewed mission to TRAPPIST-1, it would take the Space Shuttle 1.5 million years to reach it! It seems unlikely, therefore, that we will be able to send any humans or unmanned missions to TRAPPIST-1 for a very long time. We may just have to settle for a holiday in Magaluf rather than TRAPPIST-1e!