From fiction to fact? There is intriguing research into ‘reading’ our minds.

From Jedi force to Professor Xavier’s Cerebro, the ability to control external objects with our minds has long had a role in tales of fantasy and magic. But thanks to research conducted by Brian Pasley of the University of California, Berkeley, this fictional phenomenon could become a scientific reality.

The project managed to recreate the sound of words being spoken to patients by measuring the signals given off by their brain.

Epilepsy and brain tumour patients had electrodes placed on their brain which recorded electrocorticographic (ECoG) signals of their reaction to the words that they were hearing. From this, researchers were able to reconstruct the structure of the word that had been perceived, with an accuracy of 89%. (Study can be found here)

Whilst this is by no means the first study to look into decoding brain activity, it is significant in its move away from sensorimotor cortex (the area of the brain involved in the conception and execution of physical movements) to trying to decode the area of the brain associated with of language and speech (in particular the non-primary auditory cortex).

In a practical sense, the research is aimed towards developing prosthetic devices that could be controlled by the brain. This would have potentially monumental benefits for those suffering from neurological diseases that prevent them being able to express their thoughts and ideas; such as paralysed patients.

Speaking on BBC Radio Four’s Today Programme, co-author Professor Robert Knight acknowledges that the results remain at a very primitive stage, but has expressed his confidence in the possibility of more significant outcomes in future.

Further developments hinge on the ability to decode words as they are thought, rather than just interpreting the brain’s reaction as they are perceived. The potential to do this is supported by a previous experiment, conducted by Eric Leuthardt, which found that subjects were able to move a cursor on a screen by imagining different sounds (“oo” to go left, “ee” to go right), with a success rate of between 68% and 91%.

Within a wider context, investigations into the inner workings of our language processes are crucial in developing a deeper understanding of the human brain. As Pasley’s reports itself highlights, “spoken language is a uniquely human trait”; thus understanding the fundamentals of speech is a key part of understanding our species. Interestingly, there appears to be some overlap between the structure of the brain’s response visual and auditory stimulus; during an interview Pasley acknowledged that his research was largely inspired by that of Jack Gallant, also of the University of California, Berkely, who used functional magnetic resonance (fMRI) technology to measure subjects’ reactions to film clips, and reconstruct what was being shown, by monitoring the change in blood flow to various parts of the brain. This implies that the area of research is moving towards a more holistic understanding of the human brain. 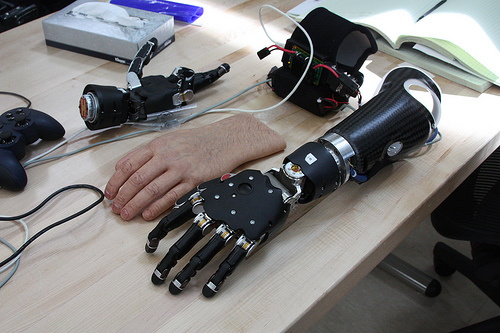 Understanding the brain can help with the development of prosthetic limbs.

However, the idea of exploring the innermost workings of the human has caused some discomfort and fears have been expressed regarding the potential “mind-reading” implications of the research.

Given the primitive stage of the research, these concerns might seem an overreaction, but there’s something alarming about the idea of people being able to infiltrate into your inner most thoughts. Pasley’s work moves from the exploring how the brain controls actions, to analysing the patterns of our very thoughts. Experiments that look at using brain signals to control physical movement; such as Paul Verschure’s “brain orchestra” where performers generated music with their brain waves, or Leuthardt’s cursor experiment, tend to be perceived as “exciting”, but as research moves towards decoding more precisely the exact words we are thinking, the subject matter becomes increasingly unsettling.

The question “how far will science go?” is eternally posed, conjuring up thoughts of your most private secrets being laid bare to passers-by on the street. Could we, for example, reach the stage where results from fMRI scans were used in courts of law? It’s a chilling thought to many, who view the mind as the ultimate sanctuary.

Yet it’s important not to get carried away at this stage. Pasley’s research is directed towards providing a medical service to those with disabilities. Co-author Brian Knight likened the idea of brain-computer prosthetic speech devices to a “grandmother getting a new hip,”. Ultimately, the project is not seeking, as many headlines have claimed, to extend ordinary methods of communication in order to “eavesdrop” on our thoughts, merely to provide everyone with the same level of verbal expression. Perhaps those who fly to alarmist and sensationalist headlines, should first take a moment to really appreciate the extent to which this research could improve the lives of those suffering from a physical inability to communicate in ways that many of us take for granted.

In response to fears over mind-reading threats, Knight responded, “the biggest danger now is not doing this work”.